The new editor of the Washington Times vowed to ensure accuracy at the paper; however, a recent column by the Times' Jeffrey Kuhner contained several significant falsehoods about climate change, which Kuhner claims is “the greatest hoax of our time.”

Ed Kelley Said He Would “Tackle” Errors And Distortions. Ed Kelley, the new editor of the Washington Times told Media Matters in June:

“Certainly on a case by case basis, if I come in and there is an individual or a group that complains that this editorial says something out of context, that it is just a flat-out error, or to use your term ... a distortion, you know we're going to take a look at it,” said [Ed] Kelley, who takes over the Times on July 1. “We want the editorials to be strong, to be persuasive, but to do so they both have to be grounded in accuracy. So, if these things are brought forth, I want people to contact me. Whether it's you or whether it's the public or any other organization if there are examples of these things occurring. I'm not there yet, won't be there for another 10 or 11 days. But certainly if this is an issue, I'm going to tackle it.” [Media Matters, 6/27/11]

An August 25 Washington Times column by Jeffrey Kuhner claimed that “the greenhouse-gas theory is evaporating into thin air. Climate Change has been the greatest hoax of our time.” To support this assertion, the column made the following claims:

Past Decade Was The Warmest On Record

Claims Of Cooling Require Cherry-Picking Of The Data. In December 2009, the Associated Press noted that claims of global cooling are often based “on an unusually hot year in 1998.” AP “gave temperature data to four independent statisticians and asked them to look for trends, without telling them what the numbers represented.” They concluded:

Statisticians who analyzed the data found a distinct decades-long upward trend in the numbers, but could not find a significant drop in the past 10 years in either data set. The ups and downs during the last decade repeat random variability in data as far back as 1880.

Saying there's a downward trend since 1998 is not scientifically legitimate, said David Peterson, a retired Duke University statistics professor and one of those analyzing the numbers.

Statisticians say that in sizing up climate change, it's important to look at moving averages of about 10 years. They compare the average of 1999-2008 to the average of 2000-2009. In all data sets, 10-year moving averages have been higher in the last five years than in any previous years. [Associated Press, 12/1/09]

No Evidence Of Cooling In Past Decade. Scientists say it's important to look at several decades of data to distinguish the long-term trend from short-term variations. However, even just the past 10 years of data refutes the Washington Times' claim of cooling. The following chart shows monthly global temperature anomalies derived from satellites from 2001-2011:

IUCN: Polar Bears Are Not A Single Population, “But Rather Occur In 19 Relatively Discrete Subpopulations.” The IUCN's Polar Bear Specialist Group (PBSG), which compiles information on polar bear populations, stated:

Polar bears are not evenly distributed throughout the Arctic, nor do they comprise a single nomadic cosmopolitan population, but rather occur in 19 relatively discrete subpopulations. There is however an uncertainty about the discreteness of the less studied subpopulations, particularly in the Russian Arctic and neighbouring areas, due to very restricted data on live capture and tagging. [International Union for Conservation of Nature, 2/10/09]

Eight Polar Bear Subpopulations Are Listed As “Declining.” As of 2010, the PBSG states that of the 19 subpopulations, 8 are declining, 3 are stable, 1 is increasing, and there is not enough data for the other 7. [International Union for Conservation of Nature, 5/11/10]

Polar Bear Scientist: It Is “Simply Dishonest” To Say The Polar Bear Population Is Booming. In an email responding to previous right-wing media claims that the number of polar bears is “booming”, polar bear expert Dr. Ian Stirling wrote:

There are 19 recognized subpopulations of polar bears in the circumpolar Arctic. For several, we have no reliable information, particularly those in Russia but in some cases, estimates for Canadian populations are out of date. So, one cannot say whether, on a circumpolar basis, the total number of bears is declining but it probably is. The data are quite clear for some populations, such as western Hudson Bay or the southern Beaufort Sea, and they are declining seriously. There are other populations that are likely declining, in part or largely because of climate warming but usually you don't have long enough data series to say this with confidence. Polar bear research in general and population estimation in particular are expensive so it is not surprising that we don't have information over a long enough span of time to answer some of the questions.

However, declines are happening for sure with some populations, and very likely in several others but we simply don't have the data to say one way or the other with certainly. Such scientific honestly is seized upon and misinterpreted freely by the deniers, as you can see from the small sample of comments you list below. The basic approach of most is quite similar though.

But, the total polar bear population is definitely not “booming”. Just saying so many, many times, and ignoring the factual, peer-reviewed, scientific data, is simply dishonest. [Email to Media Matters, 8/1/11]

Arctic Summer Sea Ice Is Expected To Disappear By Mid-Century

Arctic Sea Ice Has Been Declining For Decades. From the National Snow and Ice Data Center:

National Research Council: Thickness Of Arctic Sea Ice Has Also “Declined Substantially.” A National Research Council report reviewing the state of climate science said that evidence shows declining thickness of Arctic sea ice and that scientists expect the Arctic “to become permanently ice-free during summers by the middle of the 21st century”:

[T]here is general scientific consensus that the Arctic, which is systematically losing summer sea ice thickness and extent on an annual basis, is expected to become permanently ice-free during summers by the middle of the 21st century, regardless of how future emissions change. This change to an ice-free summer Arctic is expected, in part, because of the positive feedback between warming and sea ice melting.

Analyses of recently declassified data from naval submarines (as well as more recent data from satellites) show that the average thickness of sea ice in the Arctic Ocean has declined substantially over the past half-century, which is yet another indicator of a long-term warming trend (Kwok and Rothrock, 2009). [National Academy Of Sciences, National Research Council, 2010]

Sea Levels Are Rising At An Accelerated Pace

Sea level has been systematically measured by tide gauges for more than 100 years. Other direct and indirect observations have allowed oceanographers to estimate (with lower precision) past sea levels going back many thousands of years. We know that sea level has risen more than 400 feet (120 meters) since the peak of the last ice age 26,000 years ago, with periods of rapid rise predating a relatively steady level over the past 6,000 years. During the past few decades, tide gauge records augmented by satellite measurements have been used to produce precise sea level maps across the entire globe. These modern records indicate that the rate of sea level rise has accelerated since the mid-19th century, with possibly greater acceleration over the past two decades (Figure 2.6).

Because of the huge capacity of the oceans to absorb heat, 80 to 90 percent of the heating associated with human GHG emissions over the past 50 years has gone into raising the temperature of the oceans. The subsequent thermal expansion of the oceans is responsible for an estimated 50 percent of the observed sea level rise since the late 19th century. Even if GHG concentrations are stabilized, ocean warming and the accompanying sea level rise will continue until the oceans reach a new thermal equilibrium with the atmosphere. Ice in the world's glaciers and ice sheets contributes directly to sea level rise through melt or the flow of ice into the sea. 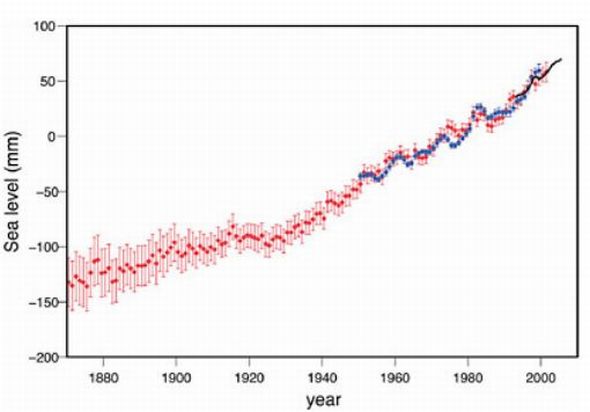 Recent Study Finds “Greenland And Antarctic Ice Sheets Are Losing Mass At An Accelerating Pace.” From the American Geophysical Union:

The Greenland and Antarctic ice sheets are losing mass at an accelerating pace, according to a new study. The findings of the study - the longest to date of changes in polar ice sheet mass - suggest these ice sheets are overtaking ice loss from Earth's mountain glaciers and ice caps to become the dominant contributor to global sea level rise, much sooner than model forecasts have predicted. The results of the study will be published this month in Geophysical Research Letters, a journal of the American Geophysical Union.

“That ice sheets will dominate future sea level rise is not surprising -- they hold a lot more ice mass than mountain glaciers,” said lead author Eric Rignot, of NASA's Jet Propulsion Laboratory, Pasadena, California, and the University of California, Irvine. “What is surprising is this increased contribution by the ice sheets is already happening. If present trends continue, sea level is likely to be significantly higher than levels projected by the United Nations Intergovernmental Panel on Climate Change in 2007. Our study helps reduce uncertainties in near-term projections of sea level rise.” [American Geophysical Union, 3/8/11]