The right-wing Washington Times is effectively serving as an unofficial sponsor for the National Organization for Marriage's (NOM) upcoming March for Marriage. The news outlet is hosting NOM's petition to “stand for traditional marriage” and plans to livestream the march on its website.

On June 19, NOM will hold its second March for Marriage in Washington, D.C. The event - expected to be a largely astroturfed affair and is slated to feature an array of extreme anti-LGBT speakers.

The Washington Times is doing its part to promote the event; The Times' website is hosting a NOM-sponsored petition urging readers to sign and “stand for traditional marriage,” instructing the government not to “seek to redefine it”: 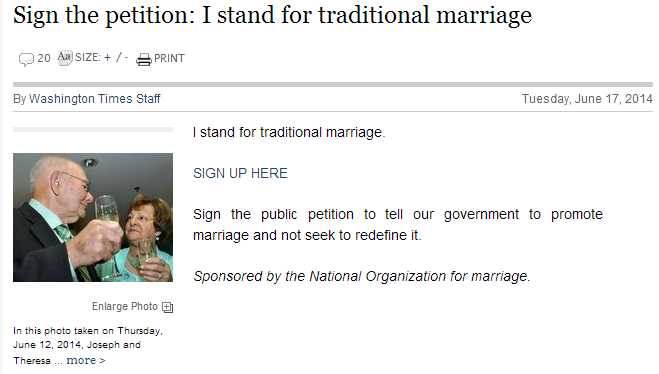 In a June 17 blog post, NOM announced that it had developed a “special partnership” with the Times to livestream the event on the news outlets website:

Thanks to a special partnership with The Washington Times, the official media sponsor of the 2014 March for Marriage, we will be live streaming the event on the world-wide web!

We are also very gratified that The Washington Times is hosting a marriage petition on their website which I encourage you to go sign right away. Click here to add your signature and show your support for marriage as the union of one man and one woman. This petition and the signatures we gather will be an important statement, along with the March itself, to our leaders in Washington and to the mainstream media that Americans still clearly stand for marriage.

NOM also announced that the Times would be creating a “special magazine” commemorating the march and encouraged supporters to subscribe to the Times' digital edition:

You can also get this special magazine by subscribing to the The Washington Times National Digital Edition. You can access this great, interactive “living digital daily newspaper” anywhere and anytime, showcasing the articles and features readers have come to enjoy from the home of fearless reporting and American values. Best of all, it is available for your desktop and laptop plus your favorite mobile device from the Apple and Google Play stores. Visit washingtontimes.com and click on the subscribe button to learn more.

Cultivating a “special partnership” with NOM and blatantly touting its march represents a clear violation of basic journalistic ethics. It's one thing for The Washington Times to cover the March for Marriage. It's another thing entirely to shill for the event.