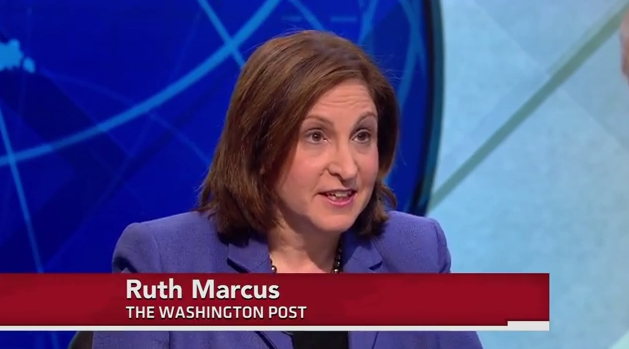 Washington Post columnist Ruth Marcus took Mary Cheney to task for challenging her sister Liz's opposition to marriage equality, arguing that - even though it's wrong to deny gays and lesbians the right to marry - Mary Cheney and her wife Heather Poe should have stayed silent instead of "[g]oing nuclear on Facebook."

In her November 20 column, Marcus echoed right-wing pundits who are casting Mary Cheney as the villain in the family feud, accusing Mary of unfairly jeopardizing Liz's chances of being elected to the U.S. Senate by deigning to say how she feels about having a sister who opposes her right to marry:

In the matter of the Cheney Family Feud: Something in me balks at leaping on the let's-all-bash-Liz bandwagon.

Sure, it would be fun. For one thing, she's wrong about same-sex marriage. As her sister, Mary, now famously posted on Facebook after her big sis re-proclaimed her opposition on “Fox News Sunday”: “Liz -- this isn't just an issue on which we disagree -- you're just wrong -- and on the wrong side of history.”

Then there is the unfortunate matter of waging this family war in public. It's easy to imagine how infuriating it felt for Mary and her wife, Heather Poe, to be sitting at home watching Liz spout off on Fox News. The urge to fight back obviously was irresistible.

But taking matters further public? Going nuclear on Facebook? Heather's post painted her sister-in-law as a political carpetbagger who shifted positions along with states:

“I can't help but wonder how Liz would feel if, as she moved from state to state, she discovered that her family was protected in one but not the other,” Heather wrote in a post Mary shared.

Like a number of right-wing pundits before her, Marcus argues Mary is to blame for the public Cheney family feud. Liz, who chose to run for public office and make her anti-equality position known, apparently bears no responsibility for putting her gay sister and her family in the spotlight.

The reality is that while gay and lesbian couples are able to marry in 15 states and the District of Columbia, they're second-class citizens in the rest of the country. Pointing out that Liz's position relegates millions of gays and lesbians to second-class status isn't “incendiary” - it's basic truth-telling.

To be fair, Marcus criticizes Liz Cheney's claim that she has always been “compassionate towards” Mary and her family, but she concludes by suggesting that Mary's family may have read too much into Liz's previous warmth. Perhaps, Marcus offered, Liz Cheney was just “being polite”:

And [Heather Poe posted], “when Mary and I got married in 2012 -- she [Liz] didn't hesitate to tell us how happy she was for us. To have her now say she doesn't support our right to marry is offensive to say the least.” But maybe Liz was merely being polite at the time. To say she's happy for the married couple is not the same as saying she embraces their marriage.

It's easy for Marcus - who's never had her right to marry put up to a referendum or become a political wedge issue - to call for restraint. But Mary and Liz aren't having a minor political disagreement. Liz's opposition to marriage equality has a direct impact on the livelihood and well-being of her gay sister. For gay and lesbian couples - whose freedom to marry isn't uniformly enjoyed and whose legal protections have come only after years of hard-fought struggle - keeping quiet just isn't that simple.