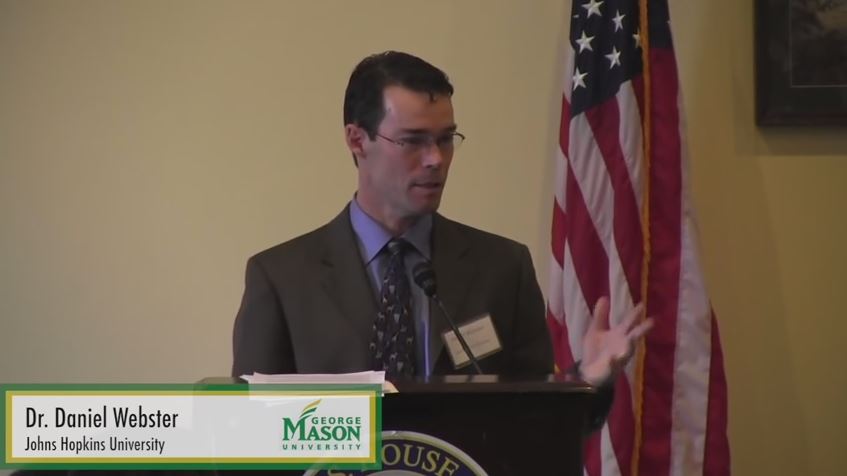 One of the most prominent gun violence researchers in the United States is disputing a Washington Post fact-check that concluded there is “no evidence” that stronger gun laws “dramatically reduce” gun violence.

In an interview with Media Matters, Dr. Daniel Webster, who serves as the director of the Johns Hopkins Center for Gun Policy and Research, pointed to research showing significant reductions in gun violence associated with permit-to-purchase laws, and explained how the Post erred in its analysis in several ways, including by relying on discredited researcher John Lott and suggesting gun suicides should be removed from analyses of the efficacy of gun laws.

The Post Fact Checker purported to check a statement by Sen. Chris Murphy (D-CT) who said during a CNN appearance, “What we know is that states that have tougher gun laws, that keep criminals from getting guns, that keep those dangerous weapons like AR-15s out of the hands of civilians, have dramatically lower rates of gun violence.” In an October 17 article, Murphy was awarded “three pinocchios” -- a rating indicating a “significant factual error and/or obvious contradictions” -- with the Post Fact Checker concluding that “the evidence to support Murphy’s claim is thin, at best” and that “there is no evidence that tough laws ‘dramatically reduce’ gun violence as Murphy claims.”

Reached by email, Webster debunked the fact-check’s conclusion by pointing to permit-to-purchase laws, which require gun buyers to first obtain a permit. Such permits often require the permittee to obtain a background check, gun safety training, and education on gun laws and use.

Webster also said that while “laws prohibiting firearms for those under restraining orders for domestic violence” may not have resulted in “dramatic” reductions in gun violence, they still “led to statistically significant declines in intimate partner homicide.”

The Post Fact Checker cited right-wing gun researcher John Lott to bolster its conclusions about gun laws, even though Lott’s research has been shown numerous times to be disreputable. When asked about the fact-check’s reliance on Lott, Webster said, “Researchers have repeatedly shown that John Lott’s work does not pass scientific muster. His research on the ‘more guns, less crime’ theory has been demonstrated to be so flawed” that “the experts assembled by the National Research Council determined that its findings cannot be interpreted. Other researchers have identified a number of errors in Lott’s data and in his statistical analyses.”

And what happens when errors in Lott’s analysis are corrected? According to Webster, “Recent research that corrects for these flaws finds the opposite of Lott’s research -- that laws that increase gun carrying lead to more violent crime.”

The Post fact-check also sought to separate out gun suicides -- which account for two-thirds of gun deaths -- from research evaluating the efficacy of stronger gun laws, claiming “many of the studies that show gun control reduces gun deaths include suicides, which distorts the results.” (Media Matters has previously criticized the Post for making this determination in a fact-check on gun laws.)

Webster took issue with this exclusion, saying gun suicides “should absolutely be included when thinking about the burden of gun violence.” The reason is the lethality of a gun suicide attempt compared to other ways by which suicide is commonly attempted. As Webster explained, “Contrary to popular opinion, suicides are preventable. Individuals that are unable to access firearms in a time of crisis may not go on to attempt suicide by another means, but even if they do firearms are significantly more lethal than other means of suicide accounting for more than 50% of all suicides. Substituting for less lethal means is likely to reduce suicide because those means have lower case fatality rates than firearms.”

Indeed, a review of 90 studies on long-term outcomes for individuals who previously attempted suicide found 89 to 95 percent did not become future victims of suicide. In terms of gun laws that can reduce firearm suicides, Webster pointed to permit-to-purchase laws, which are associated with lower suicide rates, and child access prevention laws that are associated with lower youth firearm suicide rates.

Asked about the responsibility of media as a whole to cover the gun violence issue appropriately, Webster said that “media has a responsibility to report the truth.”

He told Media Matters, “I recognize that especially on an issue considered divisive like guns, media feel the need to report ‘both sides.’ But offering the opinions of widely-discredited pundits is not ‘presenting the other side.’”