Experts and journalists have pointed out that President Donald Trump’s budget numbers for the 2018 fiscal year do not add up, as they rely on unrealistic growth expectations. Nonpartisan experts say the gap between the White House’s estimates and the Congressional Budget Office’s is “the largest on record.”

On May 23, the White House released its full budget proposal, which not only calls for kicking millions of working- and middle-class Americans off vital public assistance programs to make room for gigantic tax cuts for top income earners, but also bases its tax revenue projections on expected annual gross domestic product (GDP) growth of 3 percent by 2020. While right-wing media commentators have repeatedly defended trickle-down economic fantasies that predict unlikely levels of economic growth because of tax cuts for the rich, assuming such growth when determining revenue projections for the federal budget hides the true cost of Trump’s devastating budget plans.

Experts and journalists quickly noted the absurdity of Trump’s projections in their coverage of the budget request. In a Washington Post blog, former Treasury Secretary Larry Summers, an economist at Harvard University, called the logic of Trump’s growth assumptions “simply ludicrous” and compared it to believing in the tooth fairy. On the May 23 edition of MSNBC Live, economist Jared Bernstein, a senior fellow at the Center on Budget and Policy Priorities (CBPP), told host Ali Velshi that Trump’s budget “does not add up at all” while noting that economic growth “is a function of the growth of the labor supply,” and that’s going to slow as the country grows older. Bernstein compared the chances of Trump’s projections coming true to the chances of a kitchen appliance coming to life to sing and dance, concluding that it is reckless for budget numbers to be “based on on these kinds of fairy tales”:

On May 23, Vox correspondent Matt Yglesias pointed out that for anyone over 35, annual growth of 3 percent “doesn’t sound outlandish” because it is reminiscent of GDP growth during the 1990s. But Yglesias noted that if the United States did manage today to replicate 1990s-level growth in the labor force, productivity, and capital investment, “even under that rosy scenario” the growth rate would not hit 3 percent: 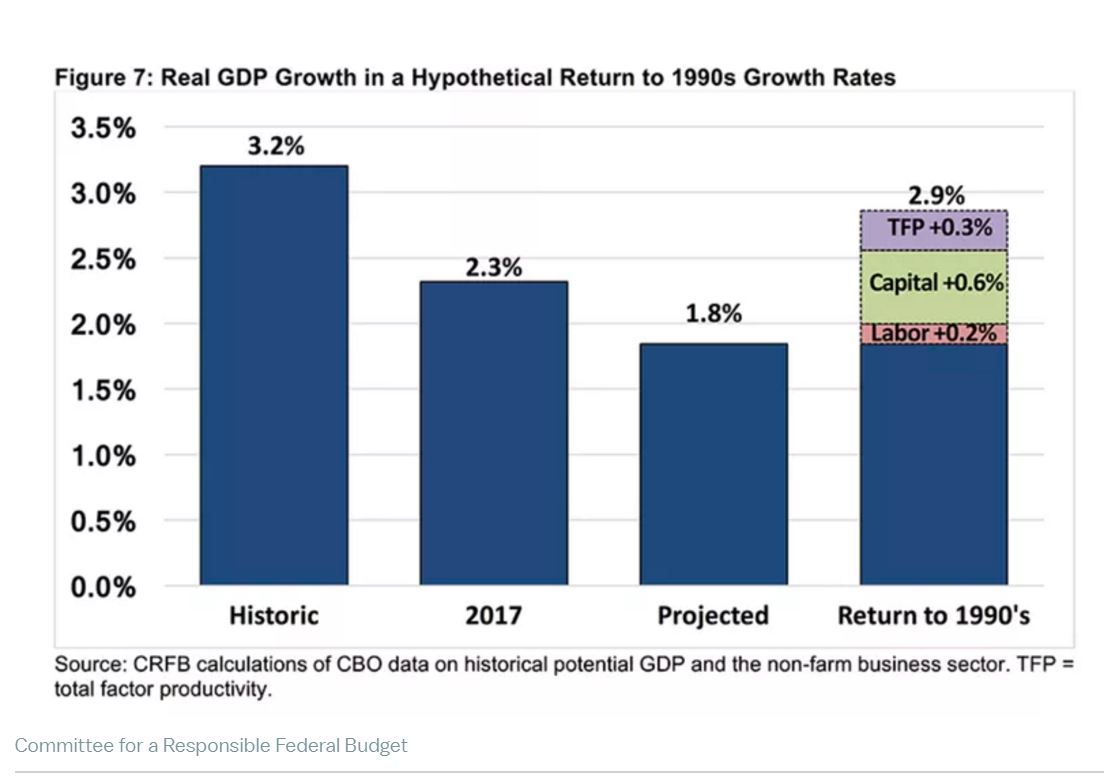 In a May 24 column for Vox, economist and former Obama adviser Jason Furman explained in even more detail why 3 percent economic growth was “extremely unlikely,” with a specific focus on the slowing growth of the labor force. Furman also noted that the American economy is already growing faster than other advanced economies around the world, which have struggled to keep pace.

As FiveThirtyEight’s Ben Casselman explained, the reason this level of growth is not currently attainable is that during the 1990s, the U.S. saw “rapid growth in its labor force and rapid gains in the productivity of that labor force.” By comparison, the baby boom generation today is retiring, not entering the workforce, which slows labor force growth, and “growth in productivity has slowed to a crawl” as electronic and internet-based technologies from the 1990s have matured.

On May 24, The Washington Post’s Ana Swanson also looked at how realistic Trump’s growth projections would be with regard to labor force growth after Mick Mulvaney, director of the Office of Management and Budget, told reporters that much of the growth could come from getting the 6 million Americans marginally attached to the workforce to be fully employed. Yet, as Swanson noted, adding 6 million workers to the 160 million Americans already in the labor force would generate only 2 percent growth.

Trump’s budget projections were not just debunked for lacking numbers based in reality; CBPP pointed out the historic gap between the White House’s economic growth projections and those of the nonpartisan Congressional Budget Office (CBO). According to a May 22 CBPP blog post, Trump’s budget proposal projects $3 trillion less in deficit accumulation using its 3 percent growth model than it would using the CBO’s less optimistic economic forecasting. The difference is even more striking because, as CBPP pointed out, the gap between the White House’s proposal and CBO forecasting is “the largest on record”: 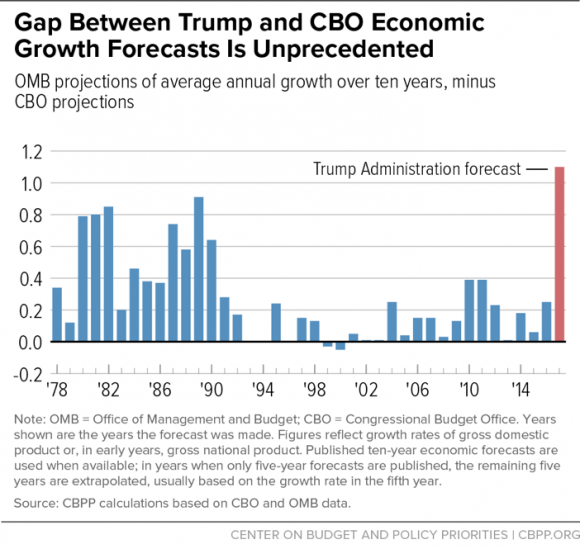