Democratic presidential debate moderators have asked only one candidate a single question about the rights and wellbeing of the LGBTQ community, failing to generate substantive discussion among candidates about the issues. At a time when the Trump-Pence administration continues its relentless crusade against the rights of LGBTQ people and the Supreme Court is set to decide whether it is legal to fire someone for being LGBTQ, the moderators of the fifth Democratic debate must ask candidates about how they will fight for LGBTQ equality.

On November 20, The Washington Post and MSNBC will co-host the fifth Democratic debate in Atlanta, Georgia -- notably the same day as the annual Transgender Day of Remembrance. NBC/MSNBC’s Andrea Mitchell, Kristen Welker, Rachel Maddow, and The Washington Post’s Ashley Parker will moderate the debate -- an all-women panel and a departure from debates’ historically male panels.

Over the last four debates (some of which were held over two nights), moderators have asked the Democratic presidential candidates more than 600 questions, but only one of them was related to LGBTQ issues. Candidates, however, have brought up the issue in the context of other conversations.

MSNBC’s Chuck Todd posed the sole question regarding a candidate’s position on LGBTQ rights during the first debate when he asked Rep. Tulsi Gabbard (D-HI) why LGBTQ and allied voters should trust her in light of her past work with an anti-LGBTQ advocacy group. However, that debate’s moderators did not ask any other candidates about their views, thus avoiding substantive discussion or comparison points between candidates’ plans to address LGBTQ-related policies. Relatedly, during the final question at the fourth debate, moderator Anderson Cooper asked candidates about the friendship between Ellen DeGeneres and President George W. Bush. The question was widely criticized for focusing the final moments of the debate on an unlikely friendship between two public figures rather than on other dire issues.

Despite the failure of moderators to ask about LGBTQ issues, some of the candidates highlighted them on their own. Sen. Cory Booker (D-NJ) spoke to the epidemic of violence against the Black trans community, and Julian Castro noted the importance of trans people having access to abortion and reproductive healthcare, although he mixed up trans women and men.

There have been two presidential primary events dedicated to LGBTQ issues, which were unprecedented, but these do not stand in for the high viewership and comparative analysis inherent to a full debate.

On September 20, journalists and LGBTQ advocates hosted an LGBTQ Presidential Forum, which featured 10 presidential candidates in separate interviews. The event was live streamed, and its video has been viewed over 58,000 times. The forum was the first time since 2007 that a presidential-election event focused specifically on LGBTQ issues.

On October 10, nine Democratic presidential candidates took part in back-to-back half-hour long interviews during the LGBTQ Town Hall on CNN. Candidates answered an array of questions on issues impacting the LGBTQ community such as discredited conversion therapy, health care access, HIV/AIDS, homelessness, and nondiscrimination protections. The town hall was the first ever LGBTQ presidential-election event broadcast on a major cable news network and garnered 1.4 million viewers at its peak.

Though the two dedicated LGBTQ events were notable, they attracted significantly lower viewership than the debates. The first two-night debate broke the record for the biggest audience for a Democratic primary debate, with about 15.3 million during the first night and nearly 18.1 million viewers during the second night. The following debates garnered between 8.3 and 10.7 million viewers. LGBTQ issues deserve the large audience that the fifth Democratic debate will attract.

Moreover, the town hall format did not afford viewers the opportunity to hear candidates debate LGBTQ issues among each other, thus failing to highlight the candidates’ differing policy stances. Several candidates have released LGBTQ policy plans, but the details of those plans, or lack thereof, have not been debated between the candidates.

Beyond asking questions at presidential debates, media outlets -- particularly cable outlets MSNBC and CNN -- should also report on the substance of any LGBTQ-related topics that appear on the platform. After the LGBTQ Town Hall, Fox News dominated news coverage of the event and focused its discussion around supposed Democratic extremism rather than actually reporting on policy proposals. The network has similarly deployed this tactic around the CNN Climate Forum, abortion, and the Green New Deal. 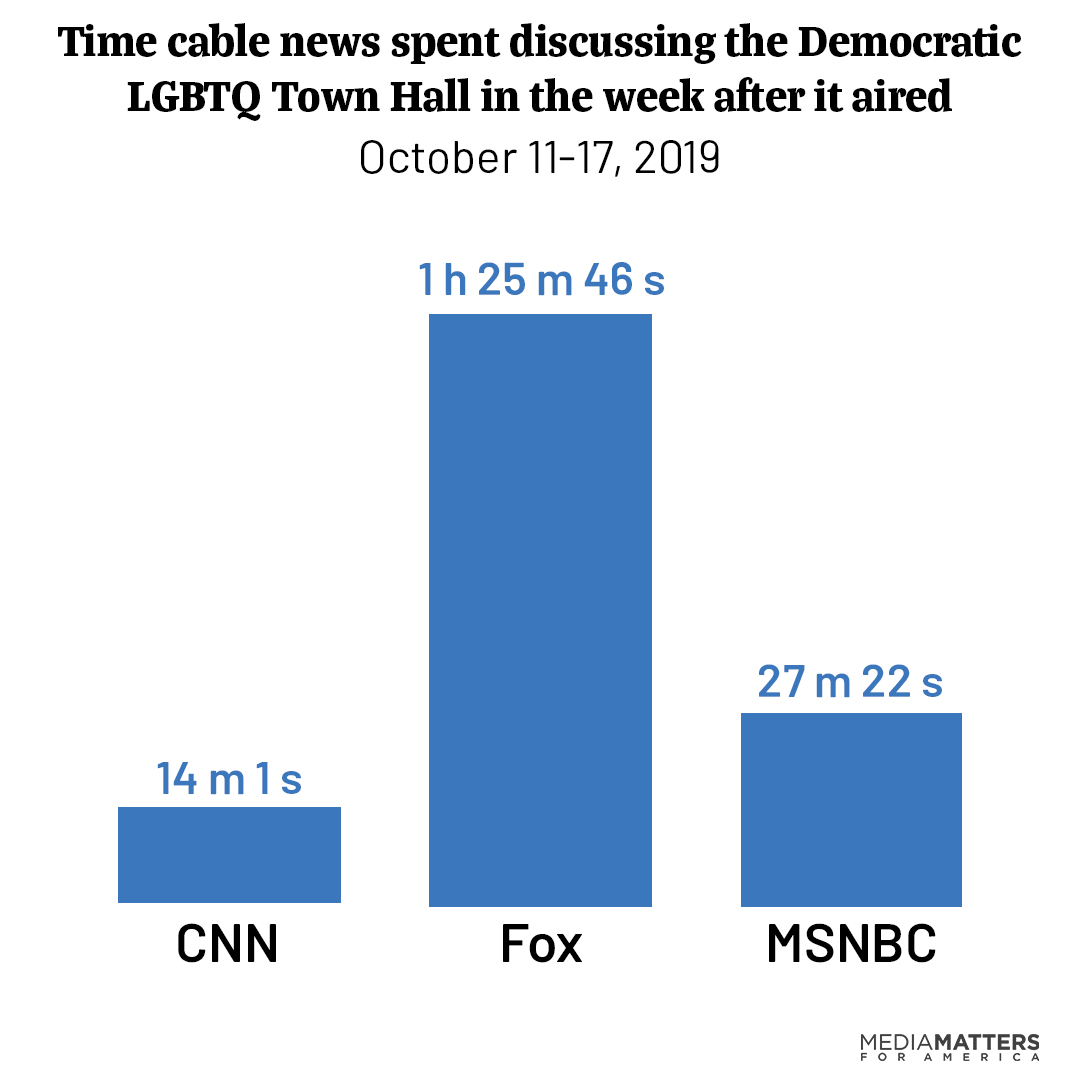 On Fox News, Fox & Friends aired seven segments discussing the town hall, and The Ingraham Angle covered it during a 19-minute segment, the longest out of all the cable networks.

Fox’s coverage of the town hall perpetuated a false “God vs. Gay” dichotomy that suggests that LGBTQ equality will result in the loss of rights for religious people. During her segment on the town hall, Ingraham erroneously claimed, “If a Democrat went to the White House, Christian, Judaic, even Muslim institutions that teach and believe traditional views on family and sexuality will be shunned, punished, and ultimately silenced by government action.”

On October 14, on Outnumbered Overtime With Harris Faulkner, Trump 2020 Advisory Board member Jenna Ellis Rives stated that the town hall “was a hate-based forum that is simply attacking the constitutionally protected right to free exercise of religion.” And on October 15, The Daily Caller’s Christopher Bedford went on Outnumbered and claimed that at the town hall, “the separation of church and state was out the window.” He also said that he “thought this was a Christian country, but apparently it’s a secular state liberal run country, according to the entire Democratic slate.”

This narrative was echoed across right-wing media, with an article in National Review calling the town hall “anti-religious” and LifeSiteNews saying it painted “a terrifying picture for Christians.” It eventually became a talking point in President Donald Trump’s speeches in the week following the town hall when he spoke at the extreme anti-LGBTQ Family Research Council's Values Voter Summit and later at a campaign rally in Dallas, Texas.

As the Trump-Pence administration rolls back federal protections for LGBTQ people in housing, health care, education, and employment, it is paramount for moderators to ask candidates how they plan to restore and advance LGBTQ rights. The LGBTQ Town Hall, the LGBTQ Presidential Forum, and GLAAD have provided moderators with myriad sample questions.

The LGBTQ community represents a critical voting bloc, and the fight for their rights deserves to take the stage at the fifth Democratic debate, especially as 80% of Americans incorrectly believe that LGBTQ people are protected by employment laws and as the media repeatedly ignore rollbacks to LGBTQ equality.

In counting the number of questions asked by debate moderators, Media Matters included invitations to candidates to make 30-second responses. We did not include invitations to make closing statements. We also did not include interjections and clarifications from the moderators unless they were interjections to allow a different candidate to speak. Follow-up questions to the same candidate on the same topic were counted as separate questions.

Media Matters conducted searches in Nexis and SnapStream databases for mentions of “LGBT,” “LGBTQ,” “lesbian,” “gay,” “bisexual,” “transgender,” “trans,” “homosexual,” “pronouns,” “town hall,” “gender identity,” “sexual orientation,” “same-sex,” “same sex,” “tax exempt,” or “tax-exempt” in programs that aired on CNN, Fox News, and MSNBC between 5 a.m. and midnight from October 10 through 17. We then searched within those transcripts for discussions about the LGBTQ town hall. We counted any segments that were devoted to the LGBTQ town hall or if there was significant discussion of the topic. We defined “significant discussion” as a back-and-forth exchange between two or more people; teasers, passing mentions, or repeat broadcasts were not included in the analysis