Anti-LGBTQ hate groups and their representatives who endorsed anti-LGBTQ extremist and Alabama Republican Senate candidate Roy Moore have largely rushed to defend him or remained silent in the day following reports in The Washington Post that he engaged in sexual misconduct in his 30s with a 14-year old.

On November 9, The Washington Post reported on a woman’s story that Moore molested her when she was 14 years old and he was 32. The Post interviewed three other women who also went on the record saying that he pursued them when they were teenagers “and he was in his early 30s.” Moore is a known anti-LGBTQ extremist, who has said that “homosexual conduct should be illegal” and that being queer is “a criminal lifestyle,” and as such has received the endorsements of a number of anti-LGBTQ hate group leaders. These figures include Mat Staver of Liberty Counsel, Brian Brown (who endorsed Moore representing his extremist organization National Organization for Marriage (NOM) but also runs hate group World Congress of Families), Tim Wildmon of American Family Association (AFA), Peter Labarbera of Americans for Truth about Homosexuality (AFTAH), and Tony Perkins and Jerry Boykin of Family Research Council (FRC).

Between 12:30 p.m. EST on November 9, shortly before the Post published the piece, and 12:30 p.m. EST on November 10, only AFA and AFTAH commented on the report. AFA repeatedly defended Moore across social platforms. On Facebook, AFA Action refused to withdraw its endorsement, writing: “AFA Action believes Justice Roy Moore to be a truthful man and a solid Christian. Based on his statement of denial we are proud to stand by our endorsement of Justice Roy Moore.” The group also retweeted four of Moore’s tweets defending himself, including one saying, “Our children and grandchildren’s futures are on the line.” AFTAH's Labarbera, however, tweeted a CNN article about a White House statement that Moore should “step aside” if the stories are true. 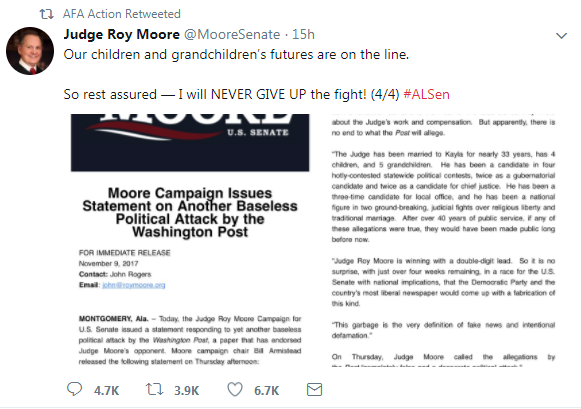 FRC Action leaders Perkins and Boykin endorsed Moore in September but have not commented on the report. The group’s Twitter account tweeted about Moore’s lead in the race shortly before the Post broke the news but has made no statements about Moore afterward. Liberty Counsel and NOM have failed to release any statement regarding Moore in the wake of the story.

Media Matters reviewed the available Twitter accounts and Facebook pages of Liberty Counsel, NOM, AFA, AFTAH, and FRC, as well as the accounts of individual figures Mat Staver, Brian Brown, Peter Labarbera, Tony Perkins, and Jerry Boykin between 12:30 p.m. EST on November 9, shortly before the Post story was published, and 12:30 p.m. EST on November 10. We also reviewed the groups’ websites and press releases, and Google News searches for each figure and group within the same time frame.

Update: After this post's publication, FRC's Perkins tweeted, “The allegations reported by the media against Roy Moore are beyond disturbing and, if true, would disqualify him or anyone else engaged in such behavior from holding a position of public trust.” In addition, Liberty Counsel's Staver was quoted defending Moore as “a man of integrity who respects women.”