In his July 8 article, Kredo claimed that Berger’s “now-deleted 2013 tweet expressing sympathy for Hamas reemerged on the social networking site over the weekend and has prompted calls for the Warren campaign to distance itself from Berger.”

Had Kredo looked at the date on Berger’s tweet, he would have noticed it was posted at 8:08 p.m., on February 20, 2013 -- the same day the New York Daily News had published Dan Friedman’s article headlined “‘Friends of Hamas’: My role in the birth of a rumor”.

Before publishing his next scoop blasting deleted tweets from 2013, Kredo should read the beginning of Friedman’s article:

The revelation could have doomed President Obama's nomination of Chuck Hagel to be secretary of defense: He gave a paid speech to a group called “Friends of Hamas.”

Fortunately for Hagel, this claim, which galloped across the Internet, was bogus. I know, because I was the unwitting source.

In the process, I became part of an inadvertent demonstration of how quickly partisan agendas and the Internet can transform an obvious joke into a Washington talking point used by senators and presidential wannabes.

A Free Beacon story attacks @maxberger, a Warren campaign staffer, for a 2013 tweet saying he “would totally be friends with Hamas.” But Berger tweeted that the day that @dfriedman33 exposed a false claim that Chuck Hagel spoke to “Friends of Hamas.” https://t.co/P4HsfNiRpL pic.twitter.com/hhHbUVwLLL

Update (7/9/19): The Trump campaign is now promoting the Free Beacon article on Twitter: 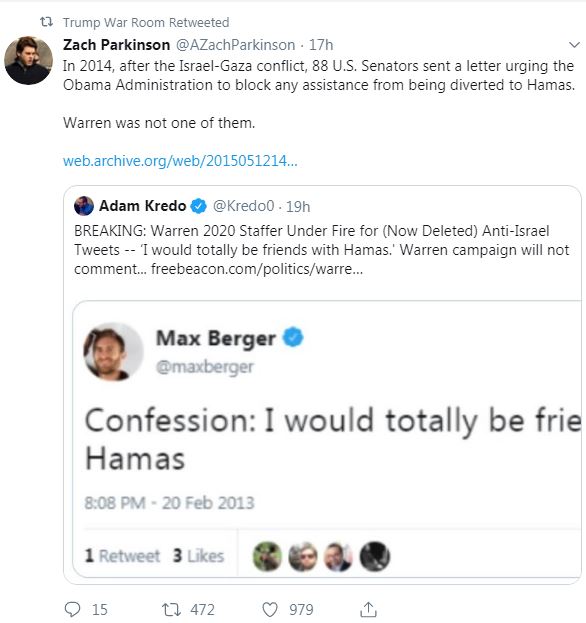 And as political cartoonist Eli Valley noted, Kredo himself made jokes about “Friends of Hamas” in 2013.