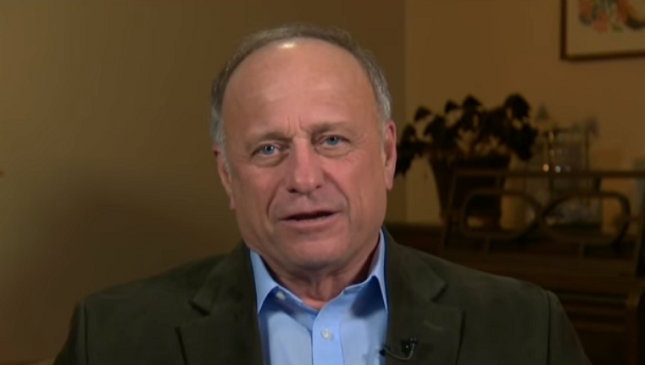 King is a racist congressman who has a history of pushing bigotry. He recently promoted British neo-Nazi Mark Collett on Twitter (the congressman has since claimed ignorance of Collett’s views).

One of King’s citations on that “Illegal Immigration Stories” page is an April 2016 VDare piece headlined “Drunk Driving Illegal Alien Kills Woman, Is Granted Bail and Disappears.” The VDare piece, by anti-immigrant writer Brenda Walker, begins by stating: “Funny how after all these years of Americans being run down by drunk driving illegal aliens, the crime of inebriated vehicle operation by unlawful foreigners is still not taken seriously by authorities.”

Media Matters has documented past VDare headlines including: “One Problem With These Hispanic Immigrants Is Their Disgusting Behavior,” “Indians Aren`t That Intelligent (On Average),” “Diversity Is Strength! It’s Also…Hispanic Immigrants Taking Over FBI’s Ten Most Wanted,” “America Does Not Need ANY Immigrants From Africa,” and “Roll Over, JIHAD—There’s Also HIJRA, Muslim Conquest By Immigration.”

King praised Peter Brimelow, the white nationalist founder and editor of VDare, while appearing with him during a 2012 Conservative Political Action Conference (CPAC) panel. Then-BuzzFeed reporter Rosie Gray wrote of King in February 2012:

Iowa congressman Steve King is unconcerned about the implications of his appearance during a CPAC panel on “The Failure of Multiculturalism” featuring a white nationalist author, Peter Brimelow.

“I don't know anything about that,” King, who came to the event to talk about his English Language Unity Act, told BuzzFeed -- though he'd earlier told Brimelow that “I've read all your books!”.

While King’s “Illegal Immigration Stories” page also cites news outlets including The Associated Press and The Boston Globe, it additionally uses sources such as the anti-immigrant hate group Federation for American Immigration Reform and Breitbart.com. Six of the Breitbart.com pieces cited by the page are by Katie McHugh, who was fired from the site for tweeting racist remarks last year (no small feat given the site’s open bigotry).