Seth Grossman, a right-wing pundit who is now the GOP nominee in New Jersey’s 2nd Congressional District, previously touted opinion pieces that were published on two leading white nationalist websites. One of those posts, which Grossman praised, claimed that Black people “are a threat to all who cross their paths.”

In an email to Media Matters, Grossman attempted to distance himself from his endorsement of the racist “threat to all who cross their paths” piece and said he wants to help “take the Democratic training wheels off the black and Hispanic communities so they can succeed even more.”

Grossman drew headlines last month when American Bridge 21st Century PAC released a video of him saying in April, “The whole idea of diversity is a bunch of crap and un-American.” (American Bridge founder David Brock is also the founder of Media Matters.)

Grossman’s career as a pundit provides numerous other examples of him publicly spouting bigotry. CNN’s Nathan McDermott, Andrew Kaczynski, and Chris Massie reported that Grossman “has said diversity leads to Muslims killing Christians and that Kwanzaa is a fake holiday made by black racists to divide America,” among other remarks.

Media Matters previously documented bigoted and racist remarks about Black and Muslim people that Grossman had made in commentary pieces and on social media before he launched his run for Congress. He claimed to know “of many Africans who wish their ancestors had been taken to America as slaves” and said “Islam is a cancer” that has “already infected a billion people.” Grossman also promoted white nationalist propaganda.

He posted a link on his Facebook accounts to an openly racist piece on the white nationalist website American Renaissance that claimed Black people “are a threat to all who cross their paths.” American Renaissance is run by white nationalist writer Jared Taylor. The piece that Grossman linked to was written by an author who uses a pen name and claims to be “a public defender in a large southern metropolitan area.” The piece concluded of Black people:

My experience has taught me that we live in a nation in which a jury is more likely to convict a black defendant who has committed a crime against a white. Even the dullest of blacks know this. There would be a lot more black-on-white crime if this were not the case.

Grossman praised the piece on his now-defunct Grossman4NJ page, writing: “Oy vay! What so many people, black, white and Hispanic, whisper to me privately but never dare say out loud publicly. Back in the Old Country, people were very careful about what they said for fear of retaliation. At one time, America was a free country and people were not afraid to express their true thoughts. Am just posting this as an individual and not on behalf of any organization.” Grossman also shared the piece on his personal Facebook page with an abbreviated version of the above commentary: 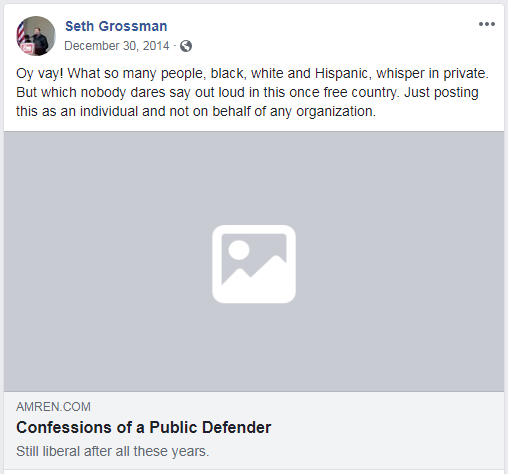 Grossman also promoted the prominent white nationalist website VDare. In a December 2010 post on the website of a conservative nonprofit group he founded, Grossman highlighted a 2003 piece on VDare.com by anti-immigrant writer Allan Wall that complained that United States law enforcement officials allegedly can’t, “in the normal course of their duties, detain illegal aliens.” From Grossman’s post:

If the U.S. ever gets serious about immigration control, it has to improve cooperation between state and local police and immigration authorities – the way Mexico does.
And by the way, here in Mexico, local police are not only allowed, but required to enforce Mexican immigration law.
http://www.vdare.com/awall/cops.htm

Numerous outlets have correctly noted -- both in recent years and back in 2010 -- that VDare is a racist site.

Media Matters asked Grossman for comment and clarification about why he shared those links. He distanced himself from the American Renaissance piece, writing: “I shared the post for the reasons I stated on 12/30/2014. ... I did not and do not agree with any of its claims, and never visited the website. I believe I got the post from Alan (sic) West who I thought was pointing out ignorance, hatred, and bigotry in both races, and the need to address them through open discussion.” (Allen West, a right-wing pundit and former Republican congressman, praised the piece on December 29, 2014.)

Grossman stated of VDare: “I have never been to their site. I don't know anything about them. I have no idea who shared that piece with me many years ago.” He also sent Media Matters a statement: “For more than 50 years, the Democratic Party set the agenda for black America. Far too many blacks still suffer from crime, poverty, and violence caused by that Democratic Party agenda. I am glad I helped Trump become President so he could change that agenda and get black and Hispanic Americans working again in record numbers. I am running for Congress so I can help Trump do even more to take the Democratic training wheels off the black and Hispanic communities so they can succeed even more.”

In recent months, media outlets have reported on the relationship between numerous Republican candidates for office and white nationalism.

*This piece was updated for clarity and with Grossman's comment about VDare, which Media Matters received after posting.