Univision correspondent Luis Megid spoke to two undocumented immigrants being held at Adelanto Detention Center in Adelanto, CA, the largest immigrant detention center on the West Coast, which is owned and operated by private prison company GEO Group. One detainee, Omar Riveras, talked about the night he was abruptly removed from his home. In a moment rarely seen in mainstream media outlets, an undocumented immigrant was presented with a face, a name, and a story, rather than just a slur of a label.

Another detainee, who chose not to be identified by name, offered startling revelations about what immigrants face while detained at Adelanto, claiming that they are barred from using outdoor facilities and that “mistreatment is something that happens on a daily basis.” From the June 1 edition of Noticiero Univisión:

Both testimonies shed light on the personal journeys of detained immigrants and on life inside detention centers, details that are too often left out of media reports. And notably, one detainee revealed that the experience inside Adelanto Detention Center may not be what GEO Group officials and Immigration and Customs Enforcement (ICE) suggest.

GEO Group has boasted about its spacious, clean facilities, but the private prison company has drawn backlash from undocumented immigrant detainees for years. Just this week, a hunger strike and sit-in protest at Adelanto turned violent when nine protesters requesting more reasonable bail and other basic accommodations, such as unused underwear and clean water, were pepper sprayed and beaten, they said. ICE is claiming that the strike is over, but groups in contact with the detainees are reporting that nearly 30 women have joined the ongoing hunger strike. La Opinión recently reported that ICE and GEO Group have recognized that officials used excessive force in their June 12 confrontation with protesters and that they would be launching an investigation into the matter.

In the last three months, three immigrants have died at Adelanto. Detainees at another GEO Group facility have accused the facility of violating anti-slavery laws, and according to ICE statistics, the detention centers with the most complaints of sexual harassment are operated by GEO Group or CoreCivic, one of the other major private detention center companies. Other instances of abuse involve “significant and life-threatening delays or denials of medical and mental health care,” “verbal abuse, employee theft, retaliation, [and] abusive solitary confinement.”

President Donald Trump’s misguided immigration policies are only serving to exacerbate the problem. A New York Times report suggests that the administration is considering rolling back basic standards for how undocumented immigrants are held in detention at a time when there is already “little accountability” for enforcing these standards, as the graph below indicates (data, graph, and information from Community Initiatives for Visiting Immigrants in Confinement (CIVIC), available at http://www.endisolation.org/resources/immigration-detention): 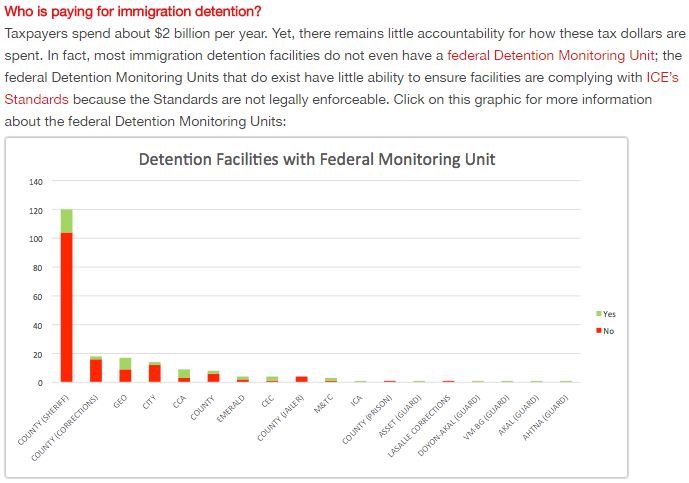 At the same time, the administration is moving to end “catch-and-release,” a malignant term for the practice of allowing undocumented detainees out of the detention centers “while awaiting a deportation court hearing.” Arrests of noncriminal undocumented immigrants has “more than doubled” since Trump took office, and a White House memo called for nearly doubling the number of immigrants in detention to 80,000 per day. GEO Group was given the first immigrant detention center project in the Trump era.

As right-wing media ramp up their efforts to sell Trump’s anti-immigrant crackdown as sound policy, journalists have an obligation to portray immigrant detention accurately.

According to Community Initiatives for Visiting Immigrants in Confinement (CIVIC), an organization that supports undocumented immigrant detainees, there was three times more reporting on immigrant detention in 2016 than in 2009, but “the complex realities of the detention system remain hidden from public view and there remains a dearth of first-hand migrant accounts.” CIVIC recommended that media should “increase their efforts to include first-hand migrant accounts in their reporting, and collaborate with organizations like CIVIC that serve migrants in detention and affected communities.”

Reporting in recent years about Rikers Island prison serves as a case study of how first-hand testimonies from inmates or detainees can have a palpable effect on readers and decision-makers. Journalists who homed in on inmates’ stories brought the reality of violence at Rikers to the forefront of the conversation on prison and criminal justice reform, and their stories -- particularly The New Yorker’s profile of Kalief Browder -- put enormous pressure on New York City Mayor Bill de Blasio, who eventually promised to close the prison. Documentaries depicting life at Rikers continue to put inmates' harrowing experiences at the top of peoples' minds.

Journalists reporting on immigrant detention can also take cues from these reporters on how to overcome barriers in communicating with inmates. In Browder’s case, journalist Jennifer Gonnerman interviewed him after he was released from Rikers, sidestepping the problem of accessing the prison itself. Other reporters have suggested following “the paper trail” of documents that prisons are required to keep in order to tell a more detailed story.

Spanish-language outlets often use telephone interviews with undocumented immigrant detainees to hear their stories directly or speak to detainees’ family members. Immigrant advocacy groups that are in frequent communication with detainees are also a valuable resource for reporters.

While the stories of undocumented immigrants in detention usually do not make it into mainstream media, they have the power to impact even far-right conservatives.

For the sake of transparency, accountability, and quality reporting on undocumented immigrant detention, it is critical that journalists overcome barriers to make the detainees’ voices heard.