Despite what its wildly misleading name might suggest, AppSame is not an application. Based on the biographical details its social media accounts provide, AppSame is “a conservative political marketing firm helping America back to its greatness.” While publicly available information does not clarify what exactly, if anything, this firm does to help MAGA, its impressive Twitter presence (1.1 million followers as of this writing) invites some questions -- about its tactics, its actual impact, its role in the spread of fake news purveyor-generated misinformation into influential right-wing Twitter networks, and whether its influence could become a case study in the way Twitter enables unknown entities to have a disproportionate impact in politics.

Both its massive following and its clout among right-wing Twitter hubs like #TCOT (an acronym that stands for “top conservatives on Twitter”) earned AppSame the top spot in Brandwatch’s 10 most influential Republicans on Twitter rankings in 2016. AppSame’s Twitter behavior is practically indistinguishable from that of hard-core supporters of President Donald Trump: The account frequently retweets the president and his family (once earning a magnanimous mention from Trump) as well as memes featuring right-wing narratives, churning out more than a hundred tweets or retweets per day. But despite its impressive following, AppSame’s original tweets barely register any viral attention, which might be evidence of a heavy fake account presence among its followers. A Twitter audit report confirmed as much in 2015, finding that 45 percent of @AppSame’s followers are suspected fake accounts.

@AppSame’s social media habits also include disseminating fake news and conspiracy theories into right-wing Twitter networks. On Twitter, @AppSame has shared links to fake news purveyors like TruthFeed and True Pundit, and its tweets have on occasion been featured in items written by fake news purveyors. In multiple tweets, AppSame either suggested or explicitly claimed that Hillary Clinton was responsible for the murder of Democratic National Committee staffer Seth Rich.

On its Medium account, AppSame has dabbled in original content creation, with a portfolio that expands on popular right-wing false narratives, including by claiming that Sen. Ted Cruz (R-TX) was involved in a sex scandal, accusing former President Barack Obama and former Secretary of State Hillary Clinton of having “built ISIS,” and claiming that Clinton “supports rape.” AppSame’s false claim that Gold Star father Khzir Khan’s speech at the 2016 Democratic National Convention was written by Clinton staffers was eventually picked up by a 9/11 truther whose platform on YouTube reaches more than 110,000 subscribers. In other posts, AppSame has made pro-Russia arguments, engaged in anti-Islamic rhetoric (like calling Islam a “very screwed up” religion), and falsely equated white supremacy to the Black Lives Matter movement. 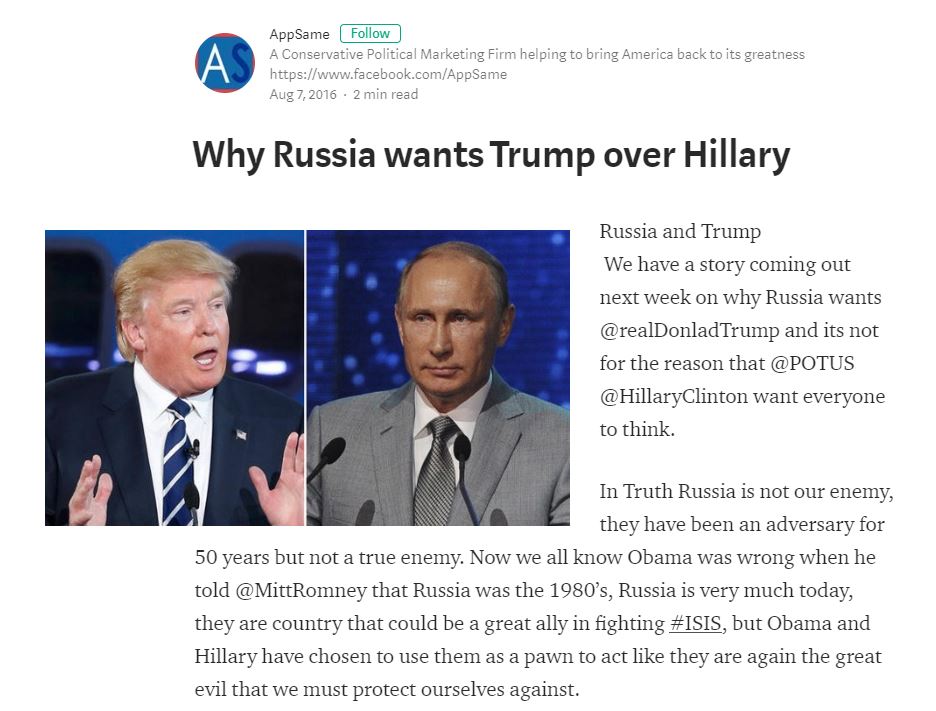 On the now-defunct video-looping social media platform Vine, AppSame tried its hand at puppet theater in 2016 with bizarre political videos featuring a wide array of characters including a devil-horned Hillary Clinton, a Barack Obama in Middle Eastern garb shilling for ISIS, a disheveled Bill Clinton, and an orange-haired Vladimir Putin influencing Clinton. Its Instagram account hasn’t been active since 2014.

Anyone interested in hiring AppSame, or even curious about what its services might be, would have a difficult time getting that information from the supposed firm’s actual website. It offers no contact information and, since May 2015, it has been publishing grammatically challenged posts advertising essay-writing websites for students in a variety of languages including Spanish, German, and Russian. In a similarly error-riddled fashion, AppSame has also promoted cell phone “spying” apps and online gambling. In an October 2015 post, AppSame advertised a Russian online casino game called “Елена Казино” (Elena's Casino), which was also promoted on Twitter in July of the same year by Russian accounts that seemed to be automated. Some archeological work into AppSame’s website using WayBack Machine revealed that in its genesis, in 2011, the site promoted gaming advertising. In 2013, the site underwent a makeover and veered sharply right, into the world of tea party conservative politics.

Even though its current website has little to do with conservative politics, AppSame at some point earned the trust of both an angel investor (who reportedly provided $500,000) and at least one conservative political candidate. Federal Election Commission records demonstrate that the Heather Grant for US Senate campaign committee made a disbursement of $800 to AppSame Inc. within three months of AppSame’s Twitter endorsement of Grant’s candidacy, which was one of many that the entity made. Grant lost the 2014 Republican primary to Thom Tillis, earning a mere 4.7 percent of the vote. According to public information, the firm is located in Tampa, FL, but walk-ins seeking “political marketing services” at that location would find themselves in a quaint neighborhood boutique, as opposed to the headquarters of a digital marketing behemoth claiming to have offices in a number of states (depending on the claim, that number is either five, six, 10, or all 50) in hopes of unseating Democrats in 2018.

Attempting to track AppSame’s links to the offline world by looking at its website domain registration is also fruitless, as it’s registered privately. A blog connected to the website, thecaped.com, appears to be registered to an Eric Stole with a Wayne, MI, address, who, based on a LinkedIn profile, is the vice president of client services for AppSame. A second LinkedIn profile, which lists him as CEO of AppSame, states that he lives in San Francisco, CA. However, a Facebook profile with information that matches his biographical details (including using the same logo as the AppSame Twitter account) states he lives in Phoenix, AZ. Interestingly, all of Stole’s Facebook friends appear to be from the Philippines, which might be explained by the fact that he claims to be an alumnus of schools located in that country. From that Facebook account, Stole offered the Bundy family $1 million to settle its legal dispute with the Bureau of Land Management. The Appsame Instagram account, which has only three posts, all featuring puppets mocking Hillary Clinton and Barack Obama, has 100 followers, the vast majority of whom appear to be located in the Philippines as well. The only other LinkedIn profile of a supposed AppSame employee who is linked to  Eric Stole is for an unnamed “Manager at AppSame” who is located in Central Luzon, Philippines. Pitchbook lists Stole as the CEO of AppSame, but a public records search for his name turns up nothing that matches any of his bios. Reached for comment on Twitter, the platform of communication in which AppSame is most prolific, a representative provided Media Matters with the following ambiguous information: 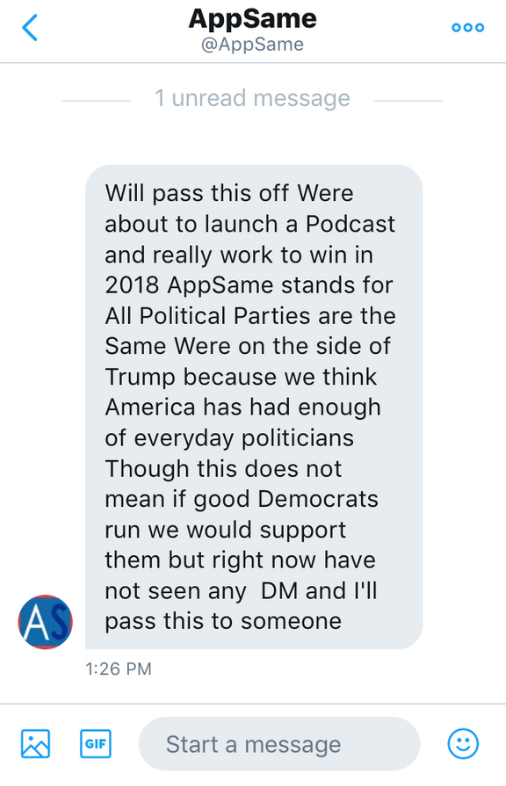 Maybe AppSame is just proof that endless retweeting, constant participation in right-wing Twitter conversations with well-placed hashtags like #TCOT, and use of the services that offer to boost one’s number of social media followers allow anyone to build impressive-seeming clout. But maybe AppSame is also evidence of something more, a playbook for political dirty tricksters to disproportionately sway conversations and influence politics via Twitter -- either by promoting false narratives, stoking racist politics, or providing a platform to fake accounts -- with little transparency about financial motivations and zero accountability.