After Florida Republican Gov. Ron DeSantis’ press secretary Christina Pushaw used an anti-LGBTQ slander to defend Florida’s “Don’t Say Gay” bill on March 4, right-wing media and figures used similar absurd attacks to defend the legislation, accusing LGBTQ people of “grooming” children to be LGBTQ or to engage in sexual activity. Recently, Pushaw credited anti-LGBTQ Twitter account “Libs of TikTok” with opening her eyes to the issue, and now Media Matters has found that Pushaw and the account have interacted with each other at least 138 times since June 2021.

On March 28, DeSantis signed the “Parental Rights in Education” bill, also known as the “Don’t Say Gay” bill, into law. This anti-LGBTQ legislation bans discussion of sexuality or gender identity in kindergarten through third grade, though its vague wording could be used to prevent such discussions — however broadly defined — at any grade level.

Throughout March, right-wing figures and media responded to criticism of the extreme bill with ramped up attacks accusing LGBTQ people of “grooming” children — the same messaging initially tweeted by Pushaw on March 4. Simultaneously, right-wing media and figures also used anti-LGBTQ content from Libs of TikTok as ammunition for their arguments.

Libs of TikTok is an anonymous anti-LGBTQ Twitter account that started on TikTok but moved to Twitter in November 2020, where it singles out individual TikTok users, including teachers, for ridicule and harassment in tweets that often go viral. On April 13, Twitter briefly suspended the account for violating its policy against hateful conduct. The account has since been restored — even though Libs of TikTok has repeatedly misgendered public figures and content creators.

Pushaw has been interacting with Libs of TikTok and promoting it since at least July 2021. The account pushed the same anti-LGBTQ messaging Pushaw has used, and Pushaw credited Libs of TikTok in a March 24 tweet with opening her eyes to educators teaching “about sex, sexuality, and LGBT issues.”

Media Matters analyzed tweets from Libs of TikTok and found that in addition to posting videos targeting LGBTQ people, the account specifically used “groomer”-related language in 46 tweets since November 2021. The tweets earned over ​​220,000 total interactions (replies, retweets, like, and quote tweets), or an average of nearly 5,000 interactions per tweet — almost double the average interaction of the account’s other tweets. Notably, the majority of the tweets with “groomer”-related language from Libs of TikTok — 24 out of 46 — were posted before March 4, when Pushaw tweeted similar rhetoric.

Pushaw has directly mentioned Libs of TikTok in 97 tweets, with 70 of them posted before her March 4 anti-LGBTQ tweets. Libs of TikTok similarly mentioned Pushaw in 41 tweets since June 2021, praising her as “one of the greatest accounts” on Twitter. (We coded tweets as “mentions” when a user replied to an account, tagged it in a tweet, or replied to another tweet which had tagged that account.) 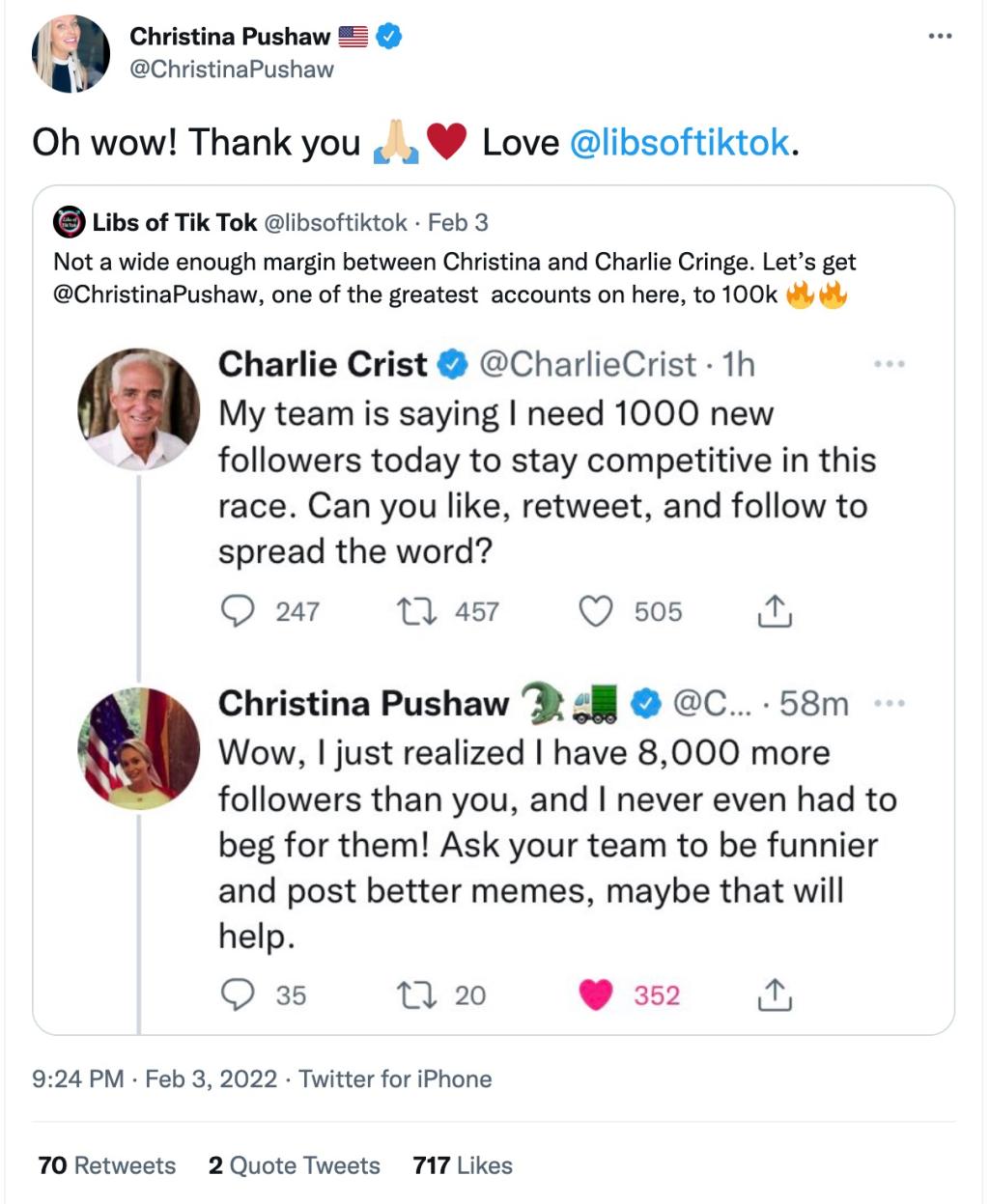 Pushaw has also repeatedly praised Libs of TikTok, similarly calling it “one of the best accounts on here.” She has also encouraged other users to look at the account’s “evidence.” 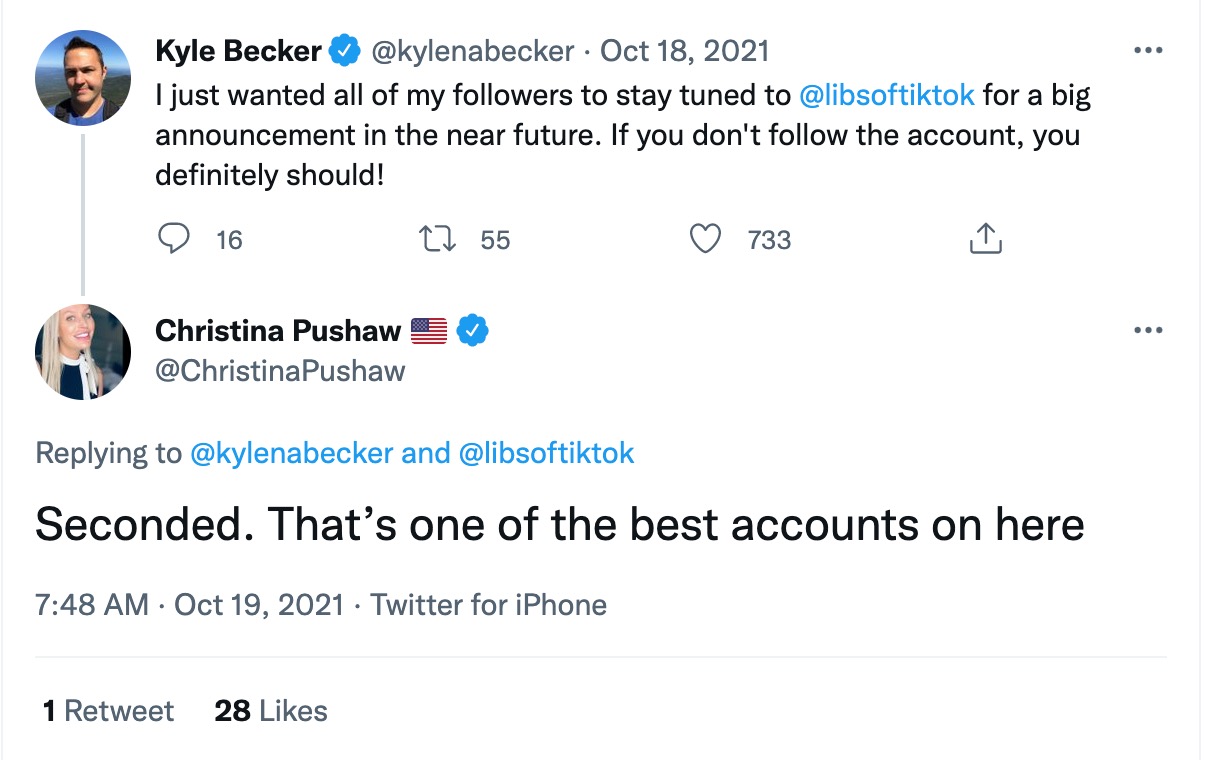 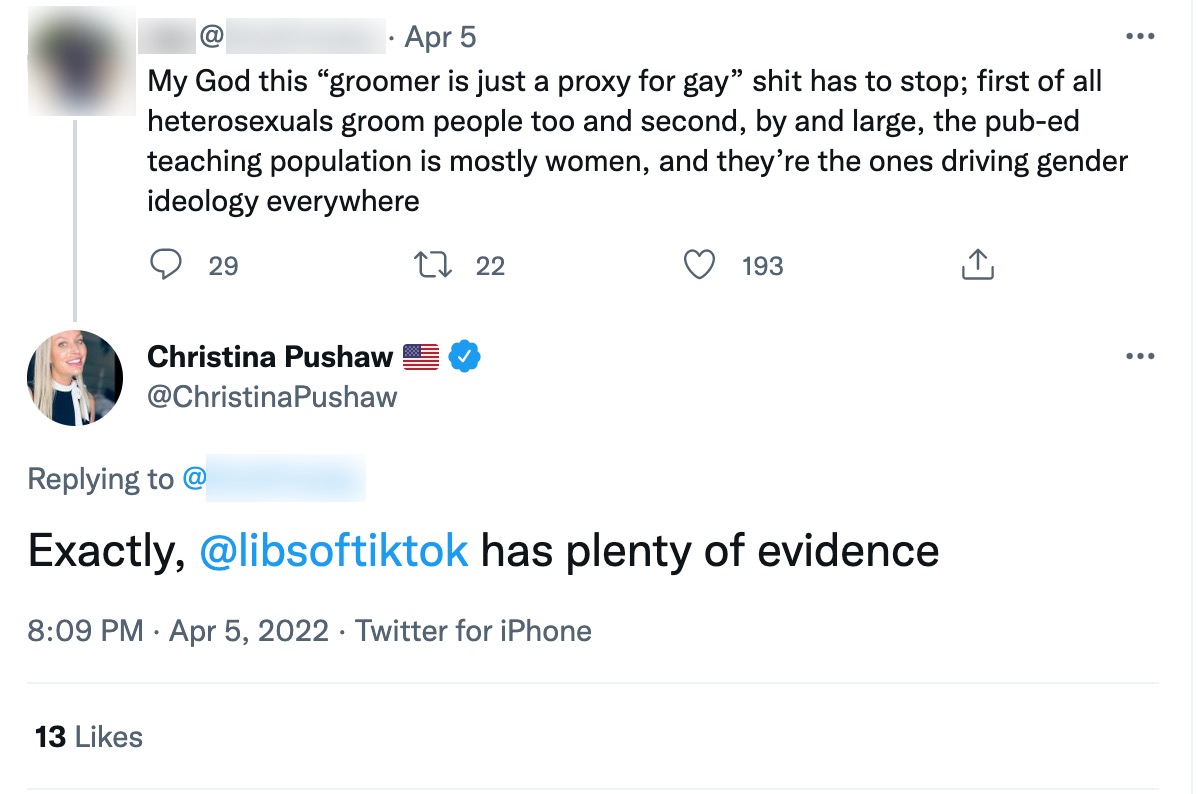 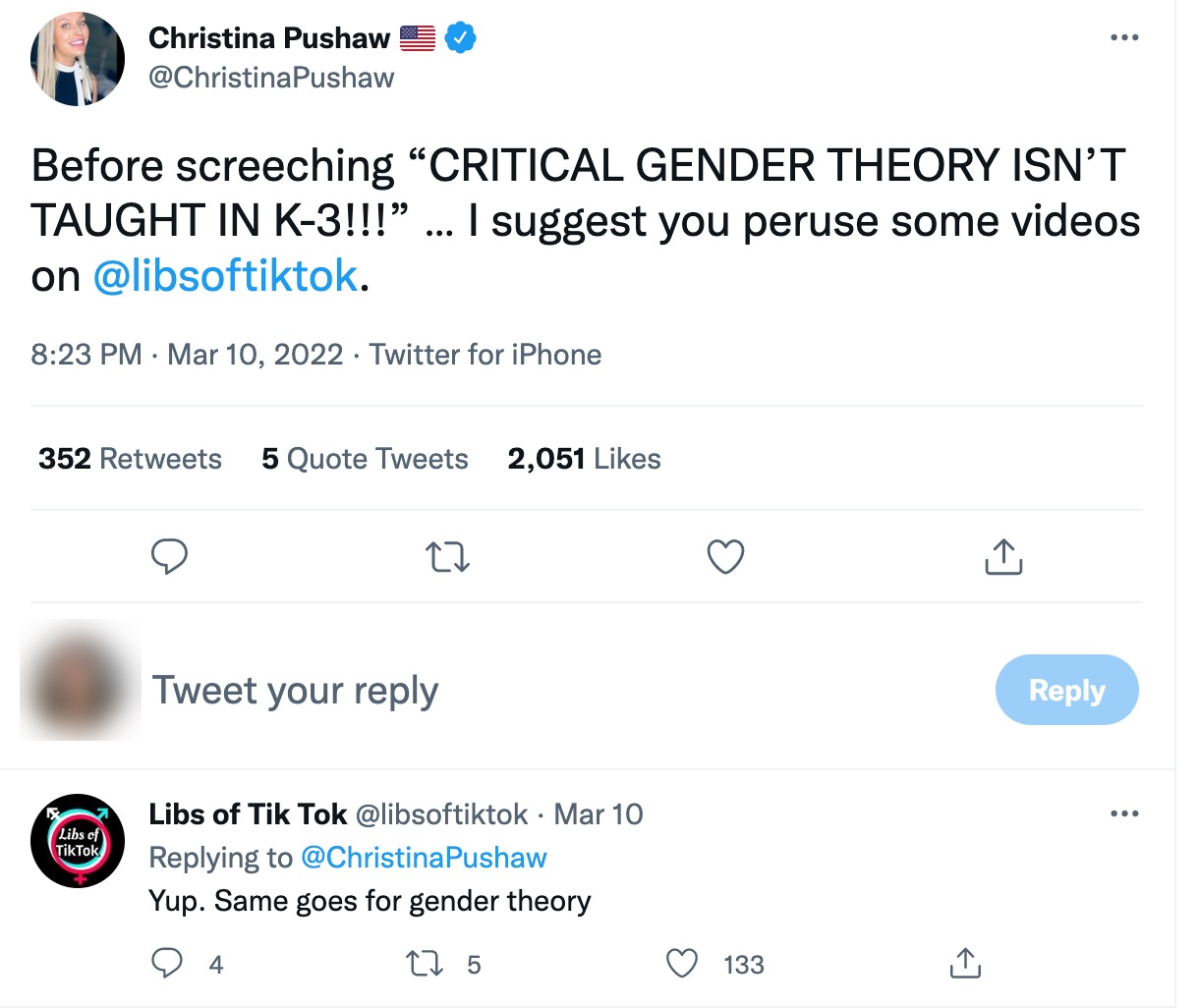 Since Pushaw used “grooming” language in her tweets on March 4, she has tweeted similar language another 22 times, earning over ​​23,000 total interactions, or an average of 1,000 interactions per post. This average is roughly triple that of her other tweets. Meanwhile, Libs of TikTok has continued to post anti-LGBTQ content, even replying to a Pushaw tweet and praising the “Don’t Say Gay” legislation as “literally genius” for exposing “creeps” and those that “identify themselves as pro-grooming.” 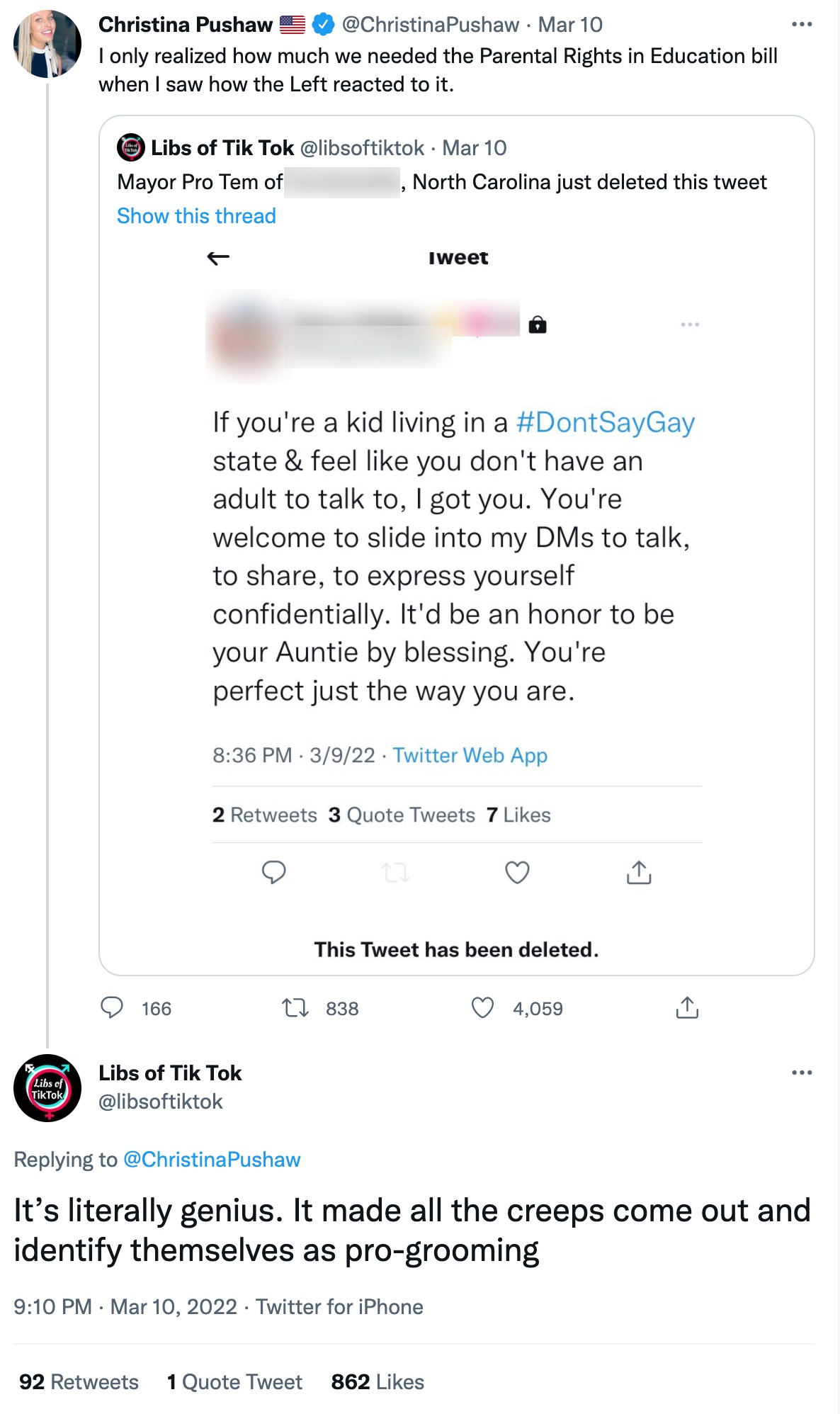 Pushaw has continued to interact with Libs of TikTok since March 4, even recently asking for additional information on content that claims to expose Florida teachers and/or curriculum. 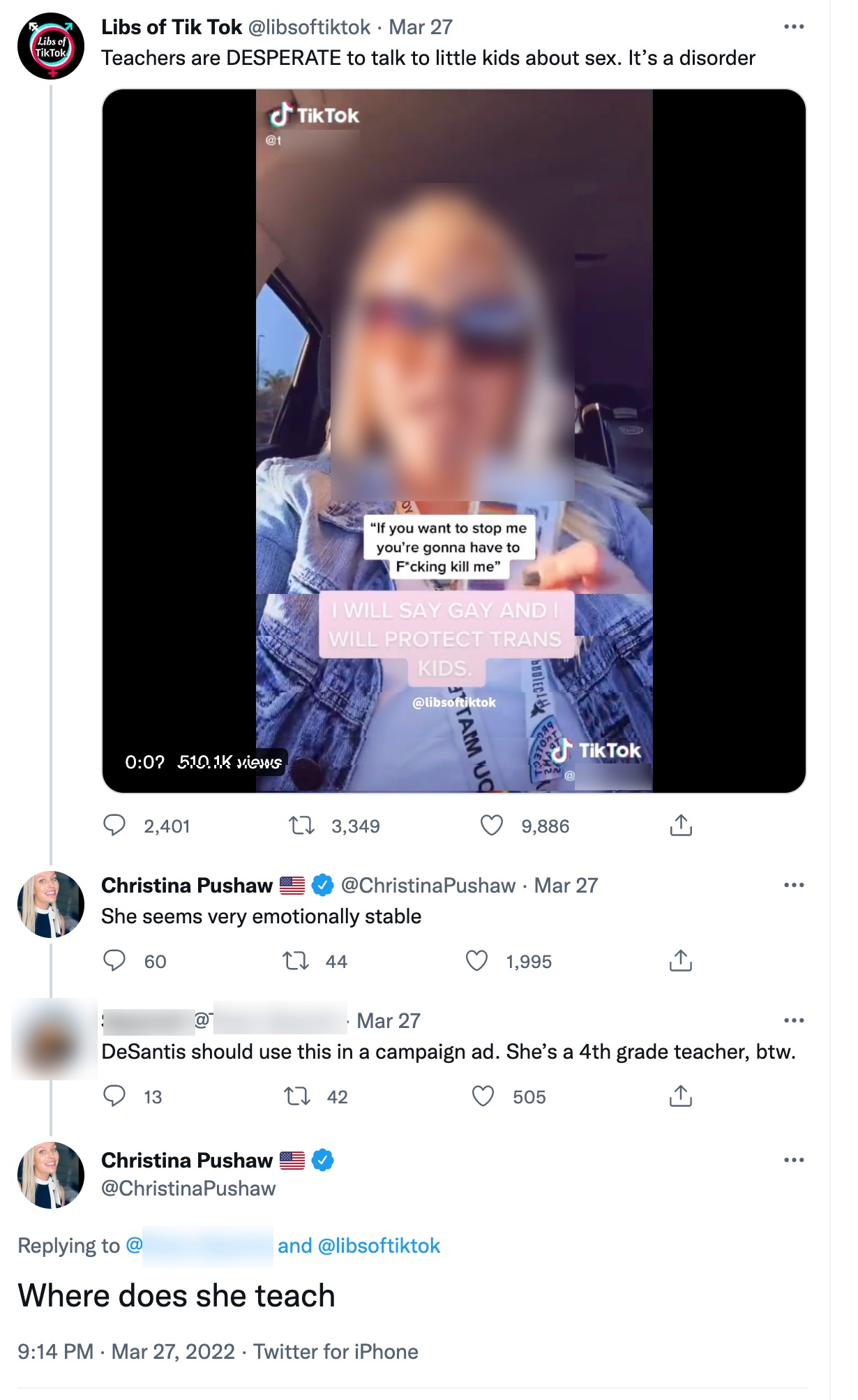 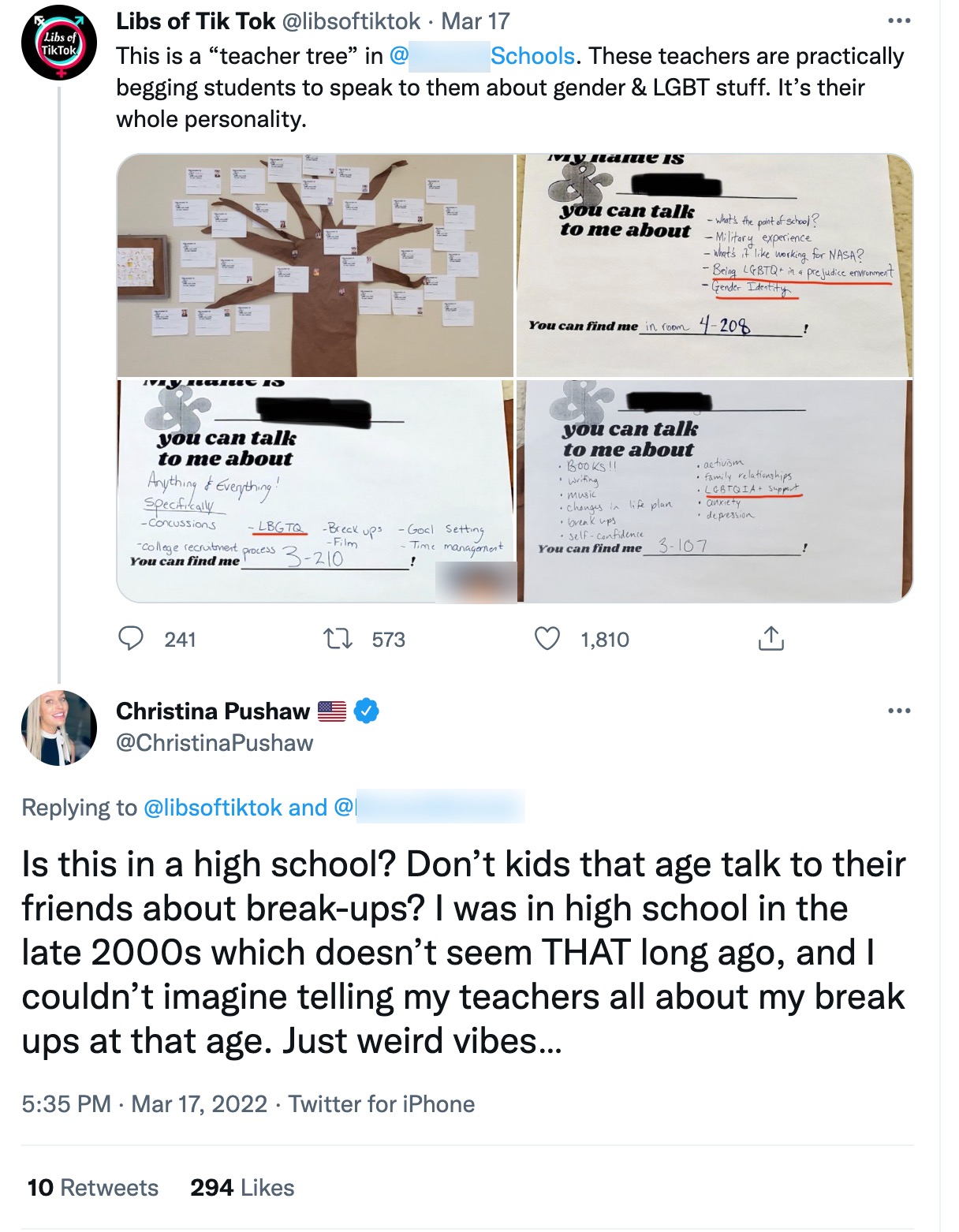 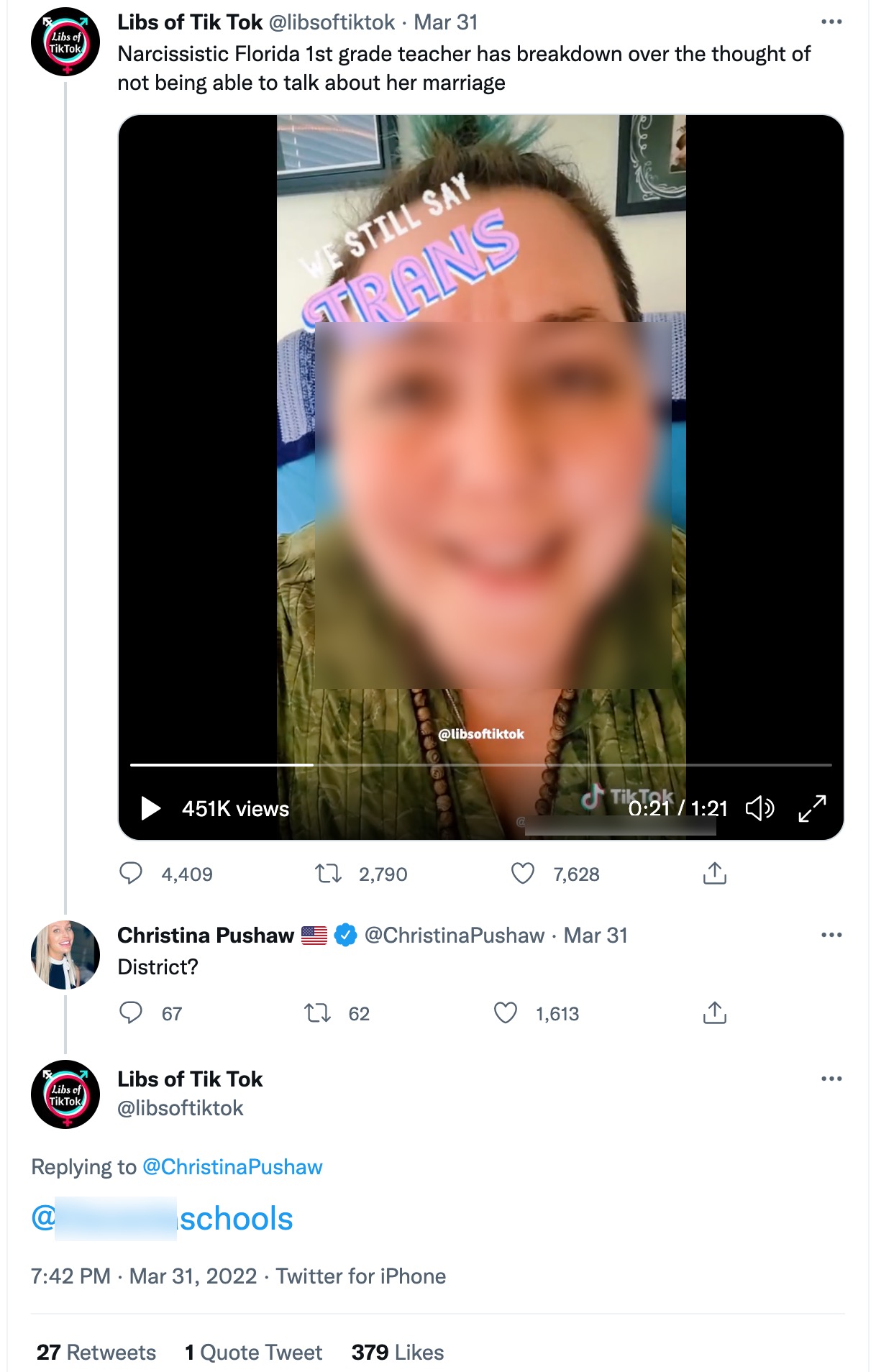 The influence of Libs of TikTok is particularly problematic, as the account is run by an anonymous user who openly espouses anti-LGBTQ rhetoric — such as calling LGBTQ identity “narcissism” based on “delusions” — has called for all openly LGBTQ teachers to be fired, and claimed in a recent interview that she is directly responsible for some “evil” teachers being fired already.