During the September 7 edition of his Fox show, Tucker Carlson questioned whether diversity is a strength, suggesting that it weakens institutions “such as marriage or military units.”

After widespread criticism of Carlson's racism, Carlson attempted a defense first via Twitter before then doubling down on his attacks on diversity during a September 10 segment, claiming the slogan “E Pluribus Unum” encompasses the idea that “differences mean less.”

Sleeping Giants, “a campaign to make bigotry and sexism less profitable,” called for advertisers to “reconsider” their support for Carlson’s show in direct response to his war against diversity.

THREAD: This weekend, we sent out this open letter to corporations sponsoring Tucker Carlson Tonight. The truth is that, much like Laura Ingraham after her racist comments, Fox will never take him off the air, even with no advertisers. But why should corporations support him? pic.twitter.com/J9Mg7JIHjS

Since Sleeping Giants released its open letter to advertisers, white supremacists have been running defense for Carlson’s argument. (Carlson claims to have nothing in common with such people despite repeating their talking points during prime time on his Fox News show.)

Lana Lokteff, who has railed against interracial relationships and has hosted white supremacists on her explicitly racist YouTube channel, Red Ice TV, defended Carlson on Twitter: 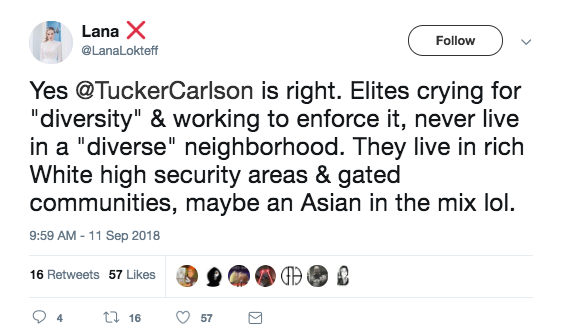 @Alba_Rising, a Twitter account that periodically posts extremist content, accused those criticizing Carlson of wanting “to destroy whites” and reacted to the Sleeping Giants letter by promoting its own letter from a nonexistent organization, encouraging advertisers of Carlson’s show to stand “strong against the threats” that it characterized as “antiwhite.”

The symbol is a pair of white hands holding a heart with a Life Rune in it. Via the @ADL_National's hate symbol database:https://t.co/tFGAaz6aej pic.twitter.com/ty9q1qGaHc

Neo-Nazi outlet The Daily Stormer slammed Carlson’s critics, adding that “racist” means a “white guy who thinks he has a right to exist,” and that critics should explain “why we are flooding our country with all of these third world hordes.” The article, penned by neo-Nazi Andrew Anglin, ended with warm praise for “this gigantic man” who “showed up and put a wrench in the gears of the white genocide machine” above a photo of President Donald Trump. 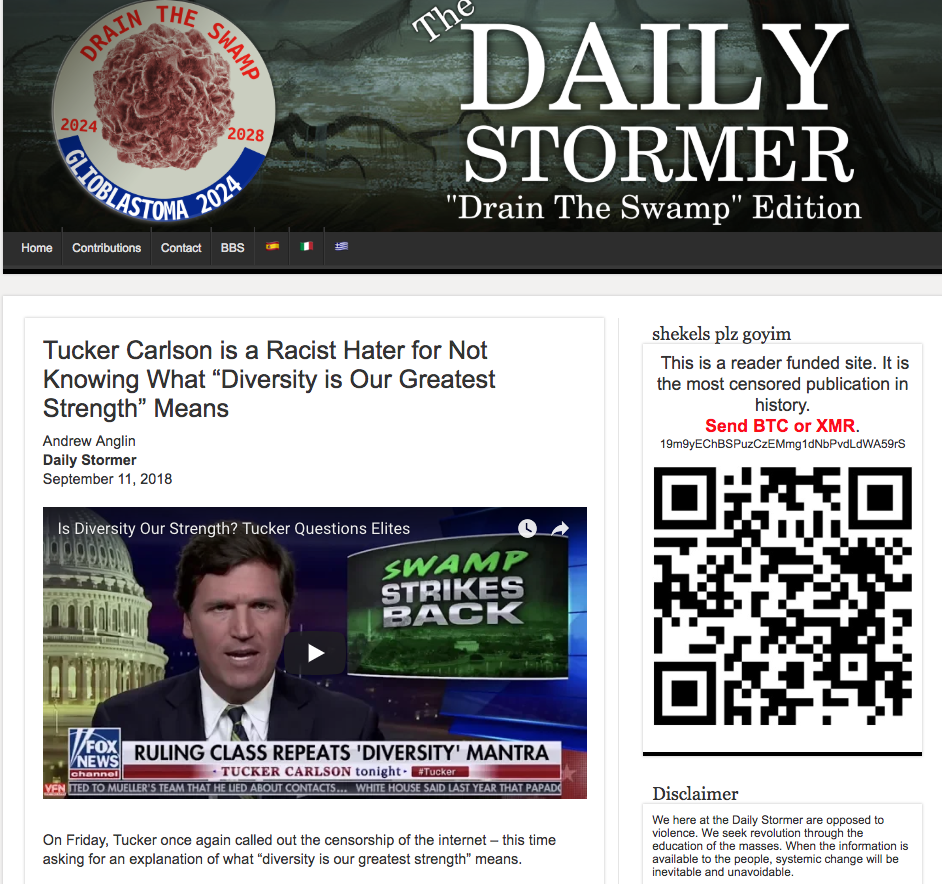 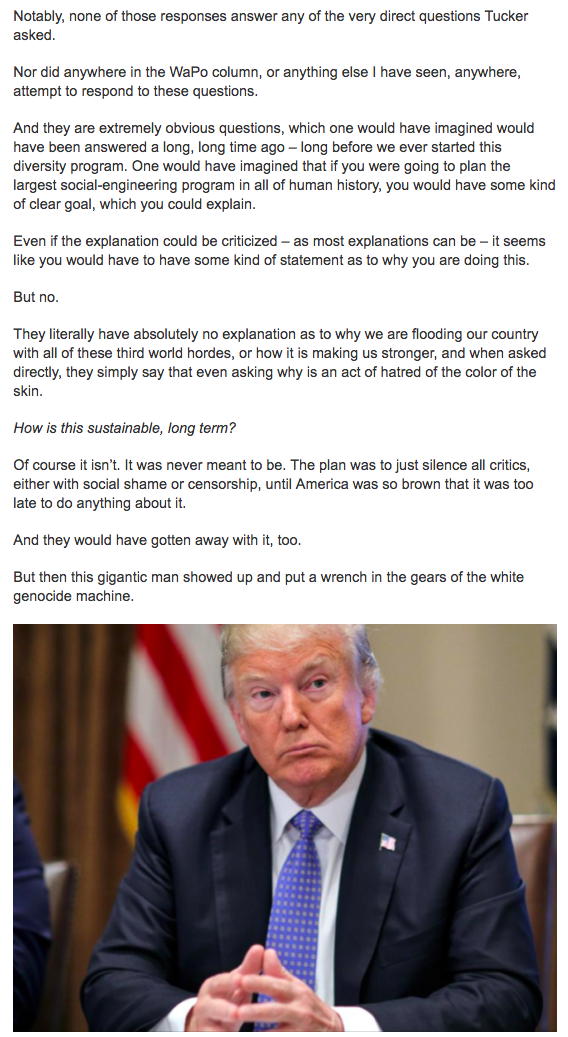 Faith Goldy -- formerly a host for The Rebel Media who was fired for appearing in a neo-Nazi podcast after attending the 2017 Unite the Right Rally in Charlottesville, VA, and who has repeatedly pushed white supremacist slogans online -- defended Carlson’s racism as an opportunity to plug her mayoral ambitions. 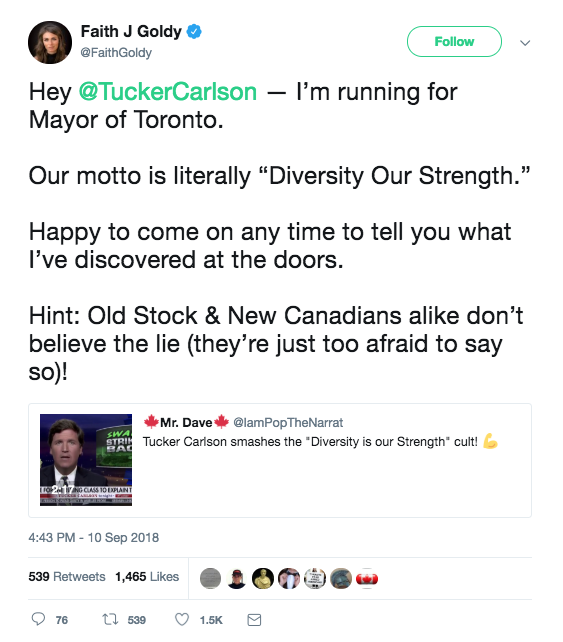 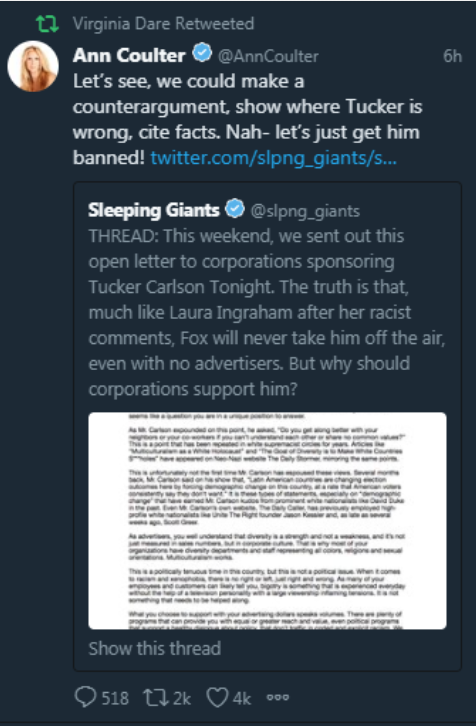 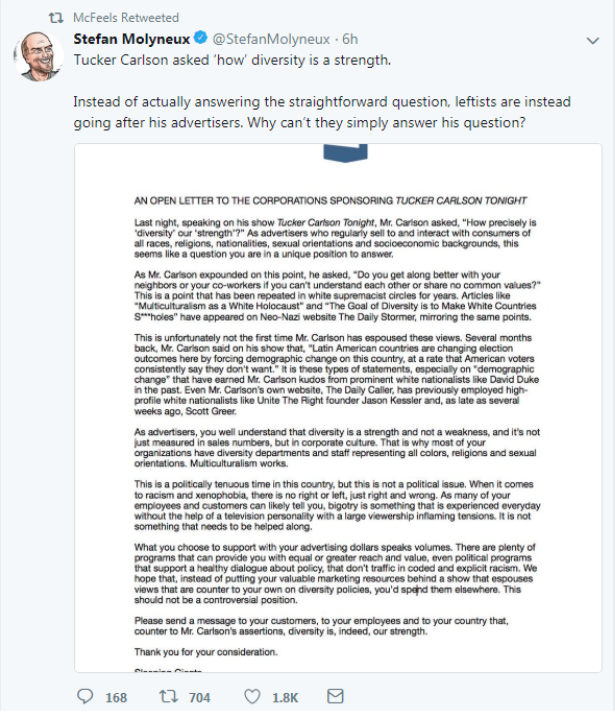 “Pizzagate” conspiracy theorist Jack Posobiec, a troll with past links to the “alt-right” who, as reported by Right Wing Watch, worked with “alt-right” figure Vox Day to publish his latest book, bemoaned the backlash against Carlson. 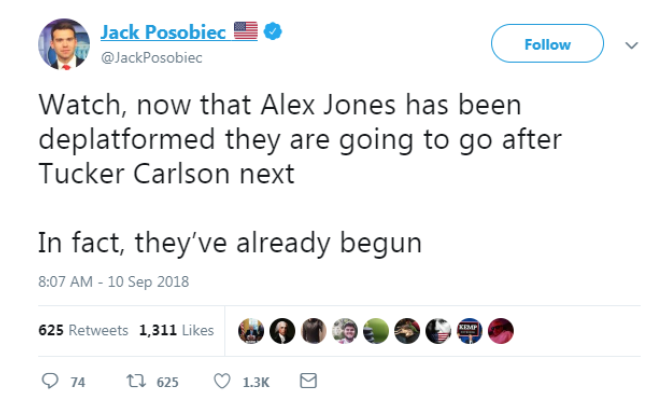 White nationalist YouTuber Nick Fuentes, host of America First with Nicholas J. Fuentes, devoted his September 10 livestream to supporting Carlson, calling diversity “no good,” claiming Carlson was just asking questions, and accusing his critics of censorship. Fuentes complained, “Why are you not allowed to talk about the browning of America? Why are you not allowed to talk about white identity or white pride?” and asserted that the “problem with multiracial democracy” is that “you can never bring up the flaws with certain groups of people.”