A memo to media and any would-be think piece writers: If you’re mad about protesters bothering Fox News host Tucker Carlson at home, then it’s worth asking whether you've expended the same energy over the harassment abortion providers face on a daily basis.

According to CBS News, approximately “20 protesters gathered in front of Carlson's home” on November 7:

Carlson's wife said she heard “loud banging and pounding on her front door,” the police report says. When officers arrived, they found politically-charged signs left on cars in the driveway, a sign on the front door and the anarchy symbol spray painted on the driveway. [CBS News, 11/8/18]

Carlson told The Washington Post that the gathering “wasn’t a protest. It was a threat.” Although he was not home at the time, Carlson claimed, “They weren’t protesting anything specific that I had said. They weren’t asking me to change anything. … They were threatening me and my family and telling me to leave my own neighborhood in the city that I grew up in.”

There are many things that Carlson has said in his capacity as a mouthpiece for white nationalism, xenophobia, racism, and sexism that are more than worthy of objection. He also regularly uses his platform on Fox News to bully, mock, and enable harassment of his guests. And the details of the protest -- as described in ThinkProgress by someone who was actually there -- vastly contradict Carlson’s claims. Yet there is now a veritable catalogue of think pieces about the lack of “civility” shown by those who protested Carlson. If media want to have a real conversation about “civility” and harassment, then it should be impossible to omit this fact: Abortion providers, patients, and clinics face everything that Carlson claimed and more, but this kind of regular, persistent, and, in some cases, daily harassment doesn’t garner the same kind of media attention as incidents like the protest at Carlson’s home.

Eleven people have died as a result of anti-abortion violence since 1993. Numerous others have been injured, and still more have found themselves and even their families targeted for personalized harassment from abortion opponents. This trend of violence and harassment against abortion providers, patients, and clinics has increased in recent years, and it shows little sign of abating. According to a report by the National Abortion Federation, rates of anti-abortion clinic protests in 2017 were already at the highest levels seen since the organization began tracking such incidents in 1977. In 2018, there have been numerous incidents of violence or threats against clinics reported in Illinois, New Jersey, Utah, Texas, Pennsylvania, California, Washington, Massachusetts, and more.

In North Carolina, abortion provider Calla Hales has painstakingly documented the frequent anti-abortion protests and harassment directed at her clinics in the state -- including attacks on her personally. As but a few examples of the type of harassment Hales and her patients face, protesters have:

Followed Hales, and taken photos and video of her car: 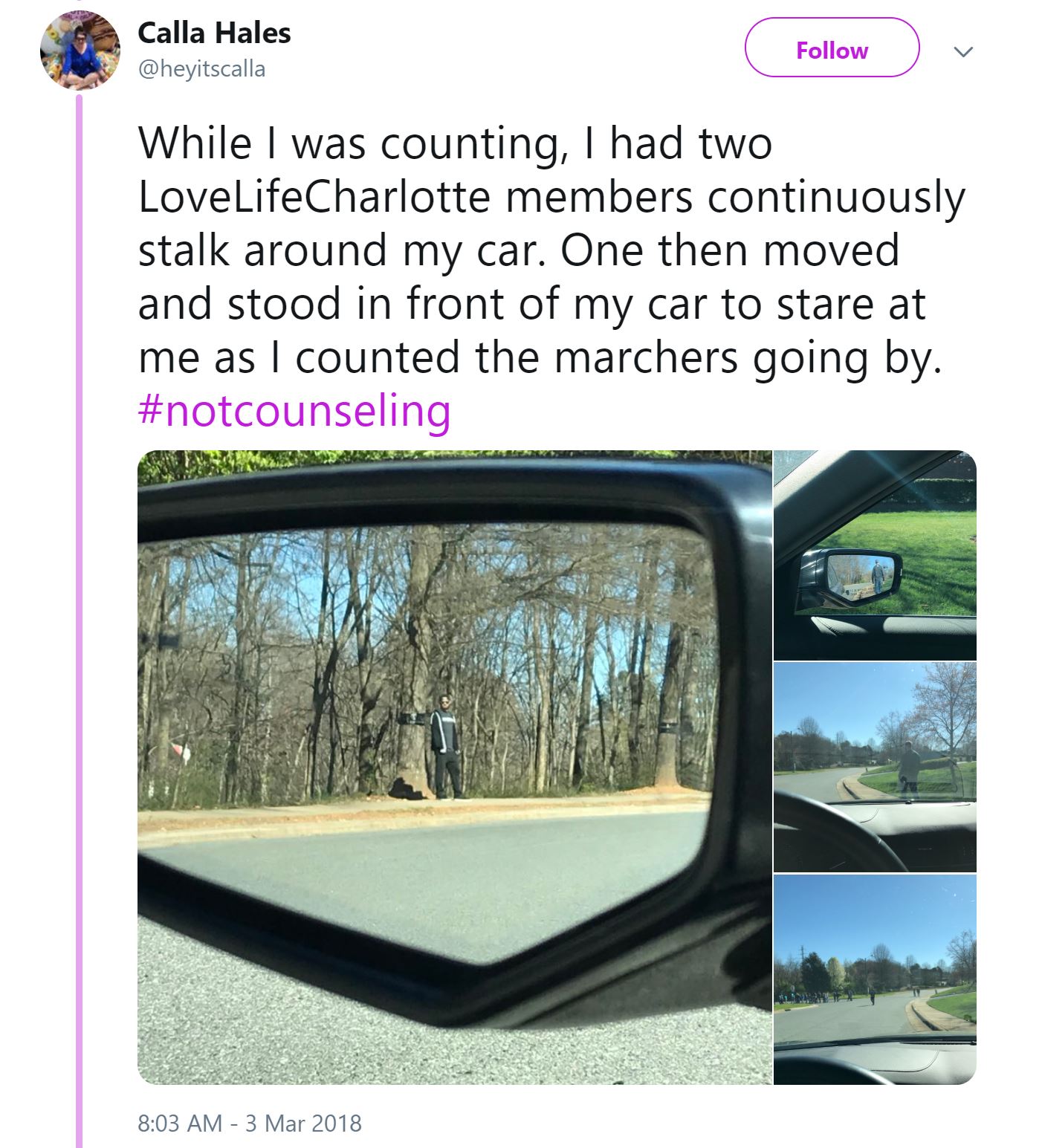 Taken photos and videos of patients entering the clinic, and persisted in trying to “counsel” them even after being asked to stop:

Deceptively dressed themselves as law enforcement to give patients the false perception that they can direct traffic, or stop their cars on the way into the clinic: 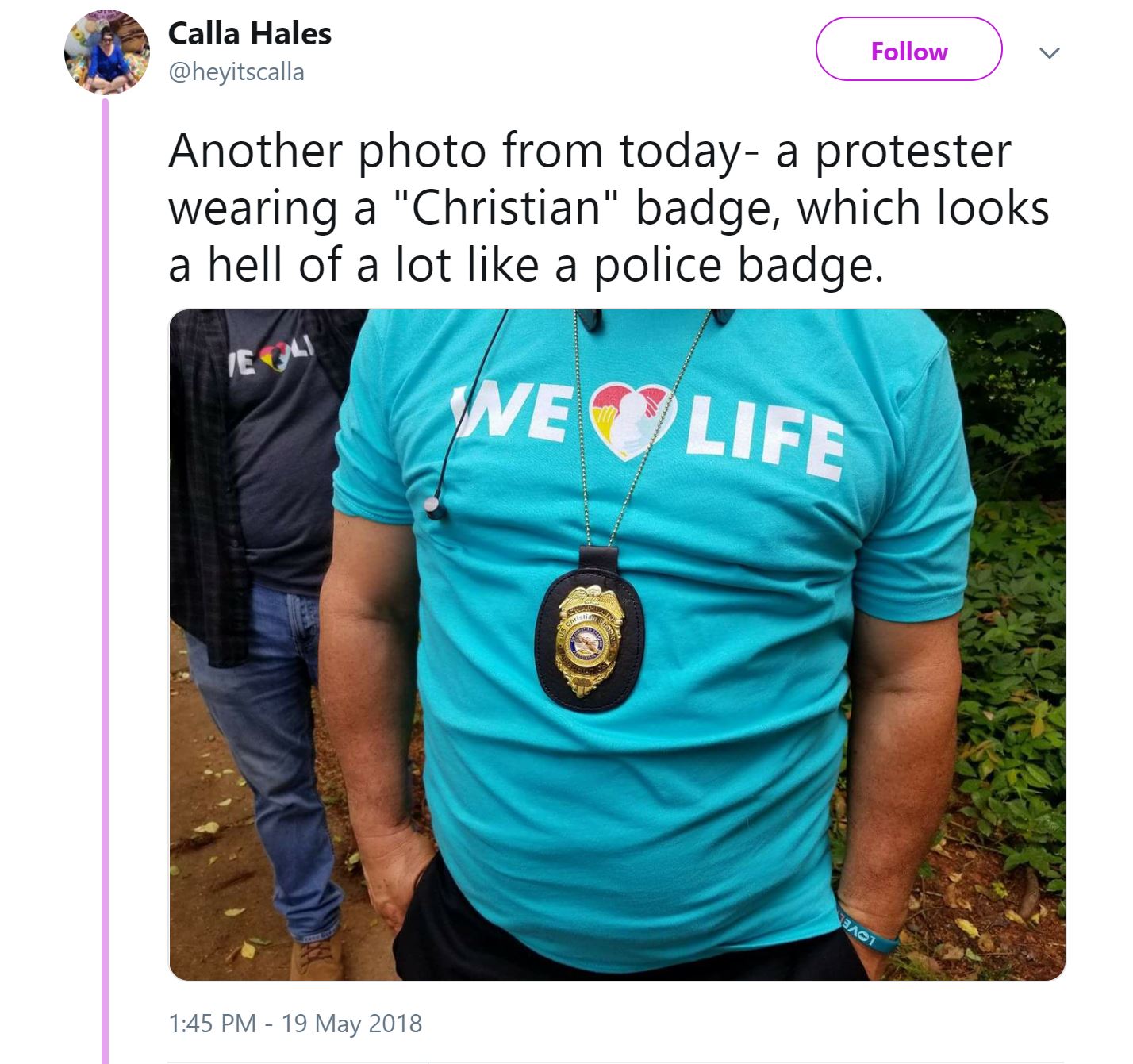 Used amplification systems to not only harass patients, but also to target clinic staff, physicians, and their families by publicizing their names:

If all of that wasn’t enough, hundreds of protesters regularly gather outside of Hales’ clinics -- blocking traffic, harassing patients, and generally making the process of accessing legal and necessary heath care more complicated than it should ever be: 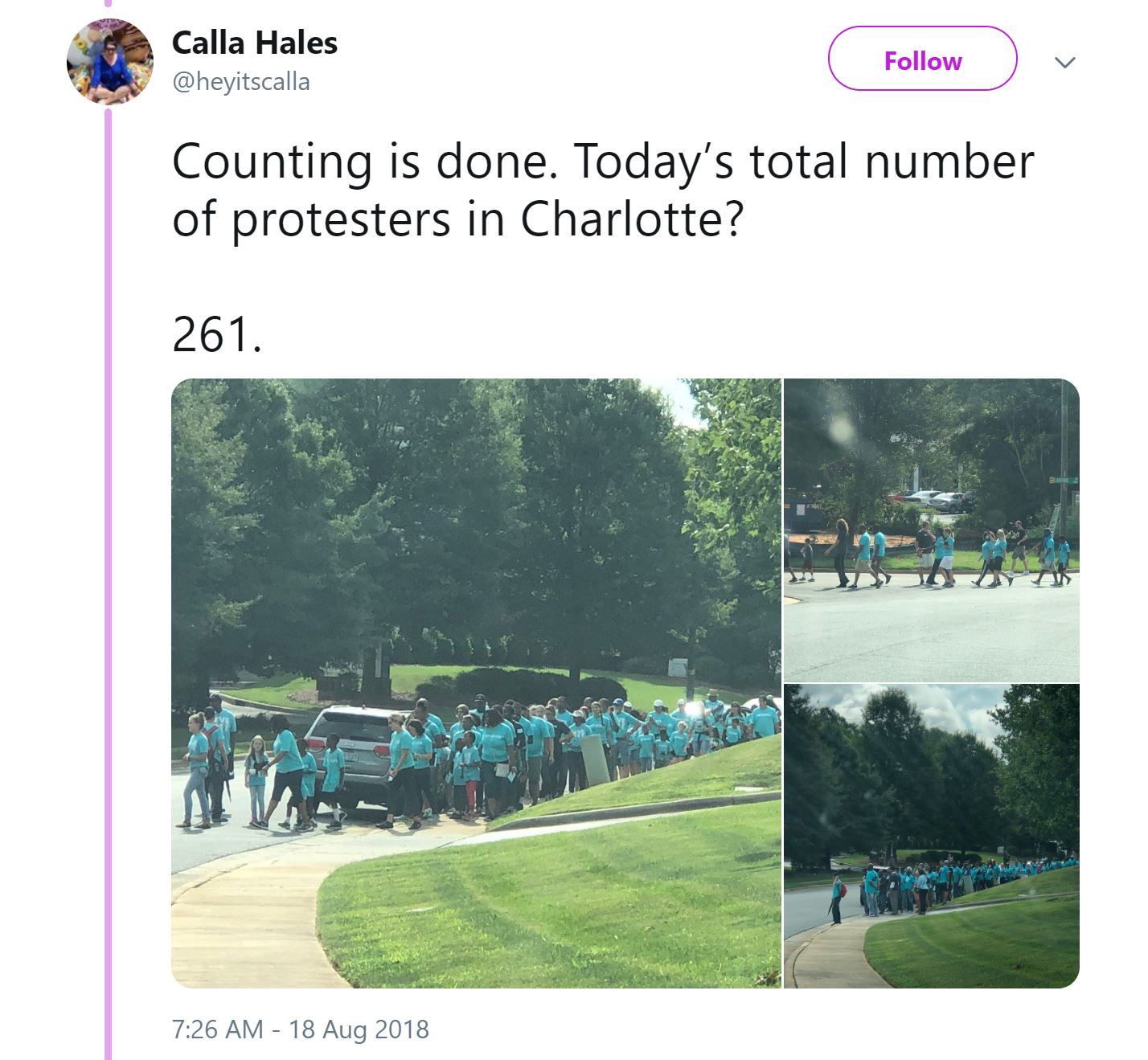 Hales has frequently noted that despite her efforts to document the continuing harassment faced by herself, her staff, and the clinic's patients, many people are still unaware of the sheer magnitude of the problem. In particular, Hales contrasted the disparate reactions to the protest at Carlson’s home and the lack of regular attention surrounding the ongoing and more severe harassment she and many other providers face:

As reported by The Charlotte Observer, the protesters regularly harassing Hales’ clinic recently acquired a nearby property and are preparing to use it as a base of operations to intensify their harassment. Imagine the media outrage if a group of protesters did even a fraction of these incidents to a right-wing media figure. How many op-eds would be written calling for “civility” if a group of protesters purchased the property next to Carlson’s home and set up speakers to yell at him and his family on a daily basis?

Unfortunately, Hales’ experience is not uncommon for abortion providers, patients, and clinics across the country. The anti-abortion group Operation Save America regularly circulates flyers with photos and home addresses of abortion providers, often with incendiary language. Just last week, radical anti-abortion group Army of God published a new manifesto from Eric Rudolph (who bombed an abortion clinic in 1997) calling for more violence against abortion providers. The organization’s website currently celebrates the release of Rachelle “Shelly” Shannon -- an anti-choice extremist who attempted to assassinate abortion provider Dr. George Tiller in 1993, and was also convicted for “six firebombings and two acid attacks at abortion clinics in California, Oregon and Nevada.” Assistant U.S. Attorney Steve Peifer told NPR: “She has counseled people to commit similar acts — even more violent acts than she did. … And there's been nothing to indicate that she's changed her mind in that regard.”

Right-wing media argue that these anti-abortion extremists are acting in isolation. Yet in many instances, these media personalities -- Carlson included -- have fostered or encouraged anti-abortion harassment. Before being ousted from Fox News after public reports that he sexually harassed multiple colleagues, Bill O’Reilly spent years not only spreading misinformation about abortion, but also openly bullying abortion providers like Tiller. Prior to Tiller’s assassination by anti-abortion extremist Scott Roeder, O’Reilly called the doctor “Tiller the baby killer,” and insisted that there was a “special place in hell” for him. After a deadly shooting attack at a Colorado Planned Parenthood clinic in 2015, O’Reilly defended his previous attacks on Tiller, claiming that his comments were accurate. After this attack, The New Republic reported on how the admitted shooter’s penchant for right-wing media such as Fox News and Infowars shaped his paranoid and conspiratorial views about abortion and Planned Parenthood. On this year’s anniversary of Tiller’s assassination, Infowars live streamed an anti-abortion protest in front of a Texas Planned Parenthood clinic. The conspiracy theory-pushing outlet then repeated the stunt in November -- just days after caterwauling about the “unhinged” protesters that “terrorized” Carlson’s home.

Harassment, threats, and violence of any kind are unacceptable. Last weekend, thousands of protesters gathered outside Hales’ clinics. Although some media outlets have reported on the epidemic of harassment faced by providers like Hales, those who saved their outrage for the protest at Carlson's home have little excuse for not reporting on the harassment facing patients, providers, and clinics on a daily basis.