During the August 22 edition of his show, Carlson devoted a segment to fearmongering about land reform in South Africa, presenting the South African issue -- in which the government is attempting to address the Apartheid-influenced concentration of land ownership by whites -- as the “definition of racism.”

Trump continued his live-tweeting Fox News by promoting the segment on Carlson’s show and adding that he had directed Secretary of State Mike Pompeo to look into the issue:

I have asked Secretary of State @SecPompeo to closely study the South Africa land and farm seizures and expropriations and the large scale killing of farmers. “South African Government is now seizing land from white farmers.” @TuckerCarlson @FoxNews

While Carlson presented his segment as an “exclusive investigation,” he was merely lifting a narrative that has been brewing in this country -- in the far-right corners of the internet -- for the better part of 2018. Pioneered by the Apartheid-minimizing organization AfriForum -- which has successfully leveraged its relationships with the international far-right to put its agenda on the map -- what’s presented as a crusade against land reform that the organization claims is linked to violence against white farmers has been embraced by white supremacists abroad and at home as evidence of white genocide.

Carlson had already given a platform to AfriForum back in May, during a visit its leaders Kallie Kriel and Ernst Roets made to the U.S. During the trip, they also met with Sen. Ted Cruz (R-TX), the U.S. Agency for International Development, and conservative and libertarian think tanks. While hosting Roets, Carlson lectured, “This is not what Nelson Mandela wanted.” As reported by Michael Bueckert at the time, AfriForum’s tour of America was “met with outrage and mockery” back in South Africa, with government authorities, academics, and journalists issuing condemnations of what they saw as an effort to “mobilise the international community against their own country.” The outrage in their country wasn’t baseless, as experts have pointed out that while some white South African farmers have been killed, AfriForum and its supporters base their narrative of white targeting on problematic statistical methodology and mischaracterizations of the current state of crime and violence in South Africa.

Carlson wasn’t the only right-wing figure elevating the issue on August 22. Earlier in the day, Alex Jones, who sees in Tucker Carlson an ally in his fight against the globalists, devoted one of his unhinged tirades on his conspiracy theory outlet Infowars to what he framed as whites being “wiped out” in South Africa while claiming that Black South Africans think “the more barbarous the better.”

Both Carlson and Jones’ comments are evidence that the narrative, which had been brewing for months, had reached boiling point. Days before, Drudge Report tweeted about the issue, while bigoted radio host Michael Savage lobbied for signatures in support of white South African farmers (Savage is now accusing Carlson of pushing his talking points without giving credit). The day before, Newsbusters -- the Media Research Center project that has promoted white nationalist propaganda in the past -- bemoaned the lack of American media coverage of South African land ownership issues.

As early as January, in a now-archived thread, users of 8chan (an anonymous message board known for its popularity among “alt-right” supporters and connections to harassment campaigns and hoaxes) had portrayed events in South Africa as a “race war” while using racist slurs against Black South Africans. 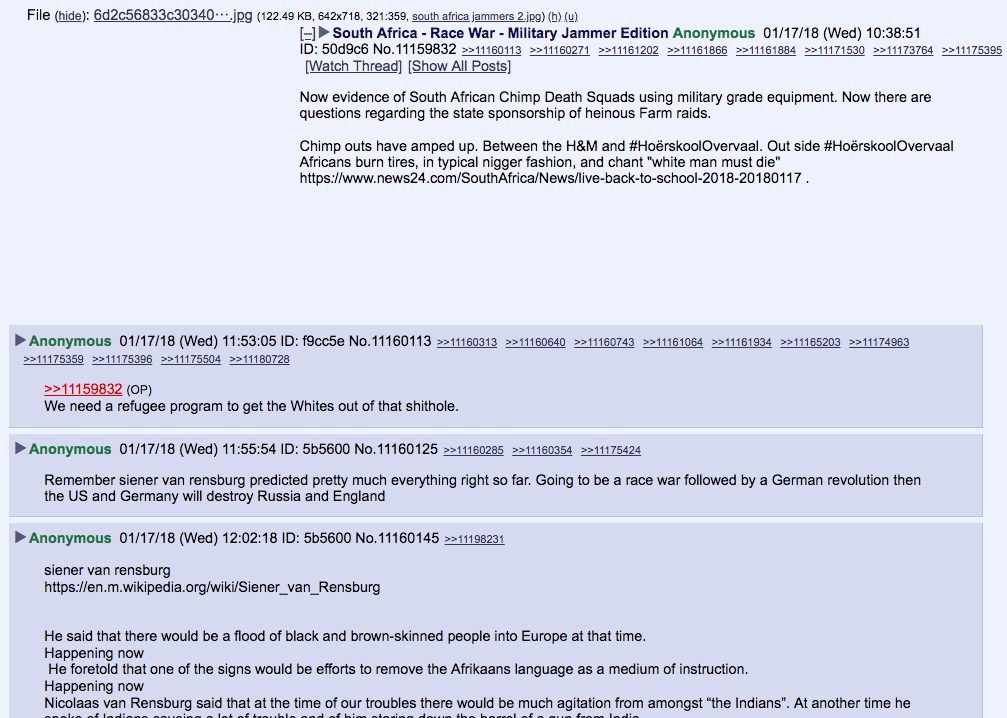 Lauren Southern, a prominent far-right troll who gained prominence on YouTube, seized on the narrative by going to South Africa in January to shoot a documentary aimed at raising the voices of those advancing the idea of white oppression connected to land ownership reforms. Following Southern, notoriously bigoted Rebel Media commentator Katie Hopkins announced her own project to expose the supposed “ethnic cleansing of white farmers.” As reported by Media Matters in March, both of their projects did more to amplify the interests of white supremacists in advancing a narrative of victimhood than actually show any plight of white South Africans. Southern’s documentary revealed her ties to white nationalist-affiliated Afrikaner activists like Simon Roche. Roche leads Suidlanders, a group that aims to protect the South African white minority against what it claims is an inevitable race war. He has links to American white supremacist Jared Taylor, whose conference he’s attended in the past, and has benefited from Southern encouraging donations to his group.

As the site Angry White Men accurately described in February, Southern’s project was “agitprop dressed up as a documentary.” But it successfully inserted South Africa as a convenient talking point for far-right figures attempting to find a case study for their argument that white people are under siege, with no regard for historical context. By February 28, the #whitegenocide hashtag had been trending for two days on the Southern Poverty Law Center’s hate tracker, a tool that maps out trending topics among far-right Twitter users. Prominent far-right trolls, like former Gateway Pundit White House reporter Lucian Wintrich also helped popularize the narrative. 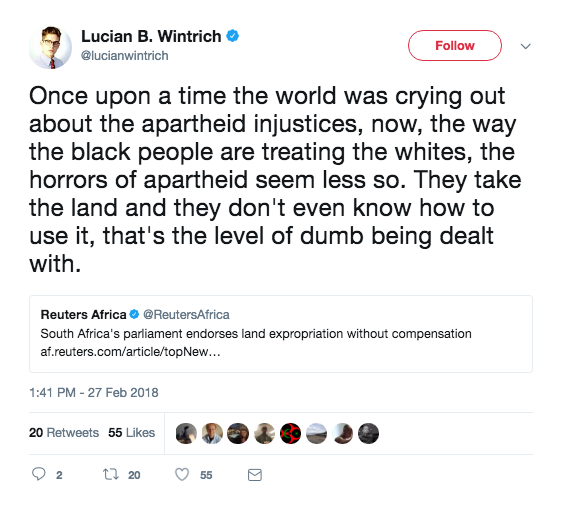 By March, prominent American white nationalist figures, including Occidental Dissent’s Brad Griffin, The Right Stuff’s Mike Peinovich, American Renaissance’s Jared Taylor, and League of the South’s Michael Hill, were using their platforms to promote Suidlanders’ cause and crusade for white South Africans. On social media, extremists were resorting to hoaxes in their efforts to illustrate the South African narrative in the most gruesome light. In a now-deleted tweet, Proud Boy Kyle Chapman posted a horrifying picture claiming it depicted a child brutalized for being white in South Africa. The picture turned out to be a 4chan hoax unconnected to South African politics, but it got attention on Twitter.

Reports on the rising interest in South African land politics and violence were met with criticism from far-right media figures, who unfairly accused researchers covering the issue of supporting brutal murders.

After Tucker Carlson hosted AfriForum in May, bigoted Proud Boys founder and violence instigator Gavin McInnes devoted an episode of his CRTV show Get Off My Lawn to the supposed plight of white people in South Africa. He hosted Willem Petzer, a white South African who makes appearances on far-right media to frame anecdotal incidents of violence as oppression of whites. McInnes opened the show with a monologue in which he characterized former South African President Nelson Mandela as “a terrorist" and claimed that current South African land politics are not related to “Blacks trying to get their land back -- they never had that land” but instead are “ethnic cleansing” efforts against whites.

It came as no surprise then that Carlson -- who has used his platform to champion white nationalist causes, has notably abstained from criticizing white supremacists, has neo-Nazis fawning all over him, and is referred to lovingly as “our guy” by some extremists on 4chan -- would seize upon the narrative and present it without appropriate context. What’s more worrisome is that the president of the United States, who oversees the most powerful foreign policy operation in the world, would prefer to get policy advice from Fox News.

Actual experts on the issue debunked the narrative pushed by Carlson and Trump. The former U.S. ambassador to South Africa was among the many who condemned the racist undercurrents and factual inaccuracies of Trump’s statement:

The President of the US needs political distractions to turn our gaze away from his criminal cabal, and so he’s attacking South Africa with the disproven racial myth of “large scale killings of farmers”
This man has never visited the continent and has no discernible Africa policy

I don’t watch Fox, but it sounds like Carlson was talking about some of the bogus propaganda put out by white nationalists about South Africa. They exaggerate isolated stories to claim that a “white genocide” is underway. If that’s the case, POTUS is all but saying the 14 words. pic.twitter.com/X36SexQZCv

Murders of farmers in South Africa are at a 20-yr low, per research cited by @burke_jason. Also note: “statistics for farm murders include farmworkers, who are usually not white and who are also often hurt in violent attacks.” https://t.co/9HuY3yP7x5

Wondering what this is all about? Everything that Trump thinks he knows about South Africa has been mediated (and distorted) by white supremacists. I’ve written about this for @africasacountry: 1) https://t.co/shg87pXdle 2) https://t.co/w87INLKc0W pic.twitter.com/OVB4E2rTej

Along with celebrating the role Carlson was playing in carrying white supremacist narratives all the way up to the White House, White supremacist Mike Peinovich called the moment “very big”: 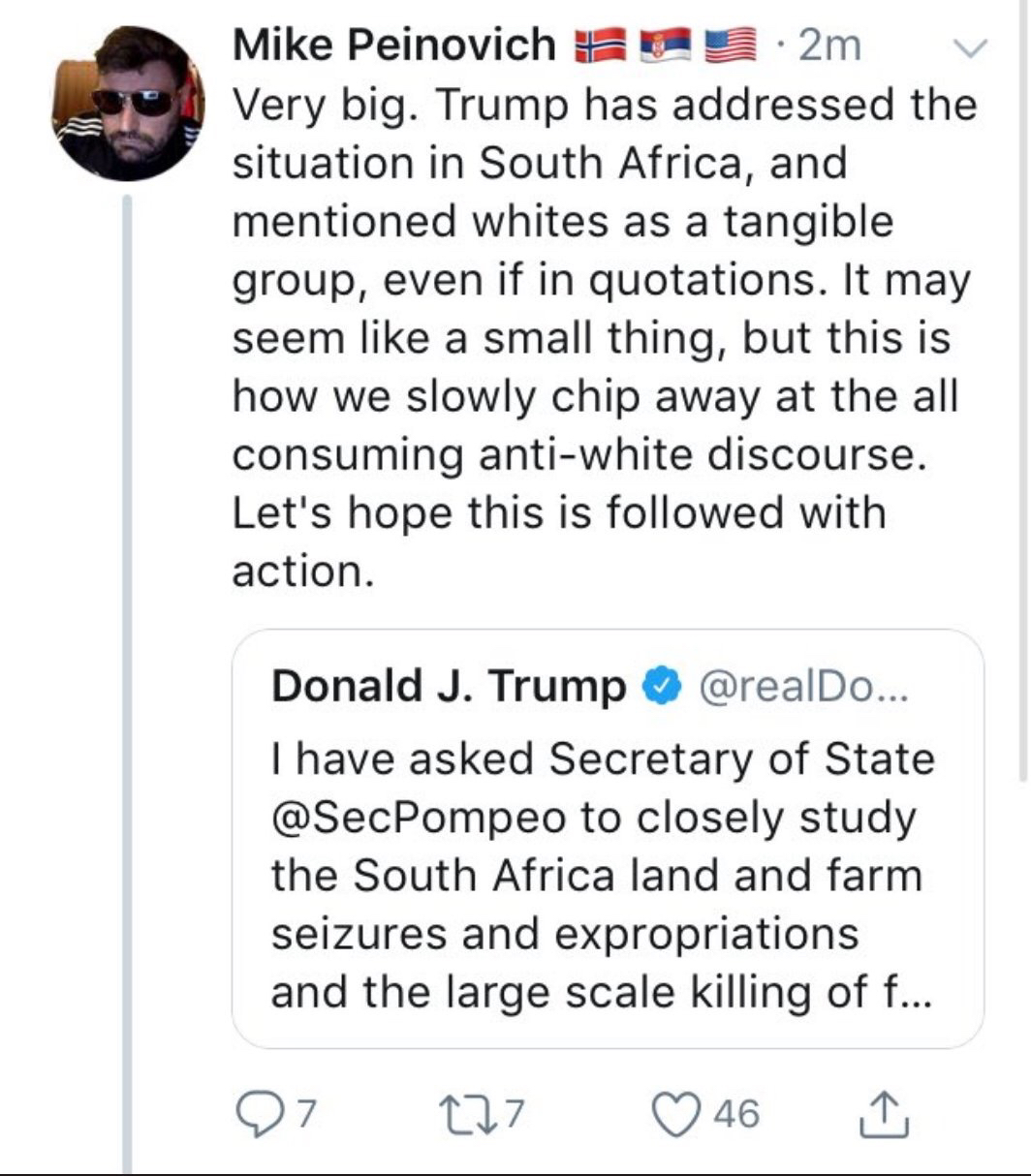 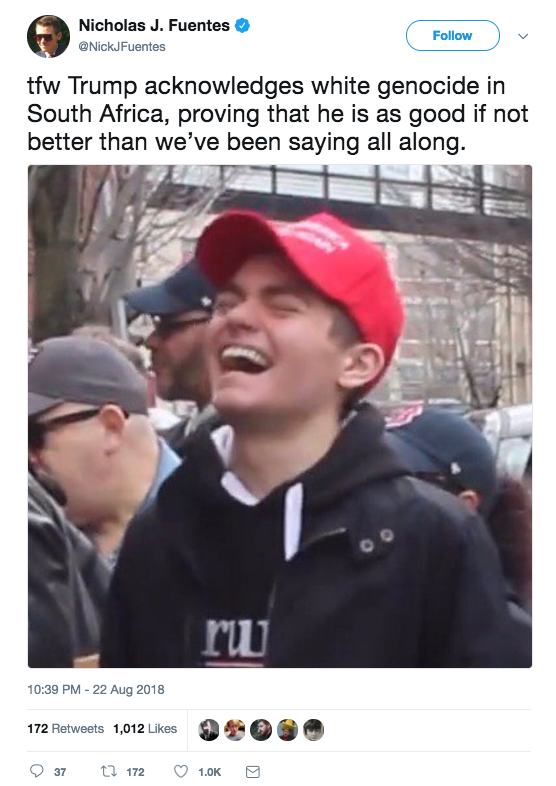 The “alt-right” group Identity Evropa framed the issue as “a warning to people of European heritage all around the world:” 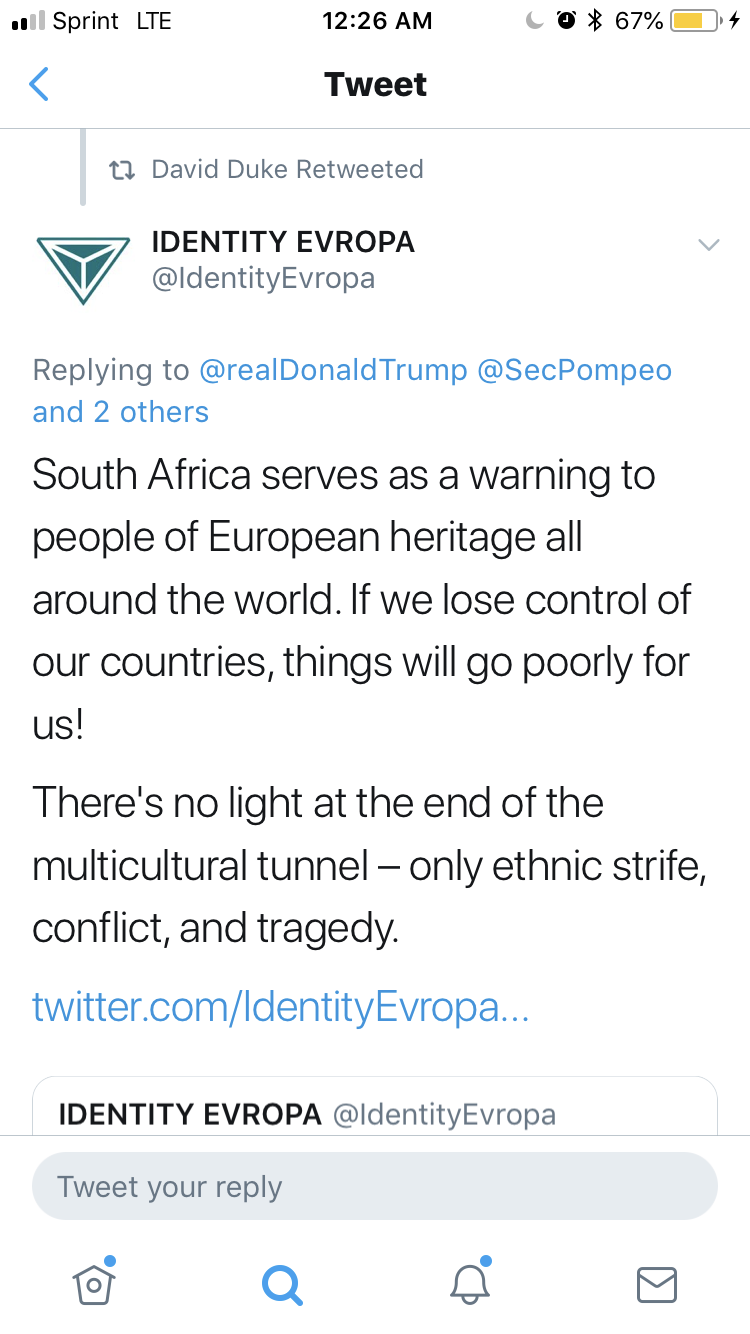