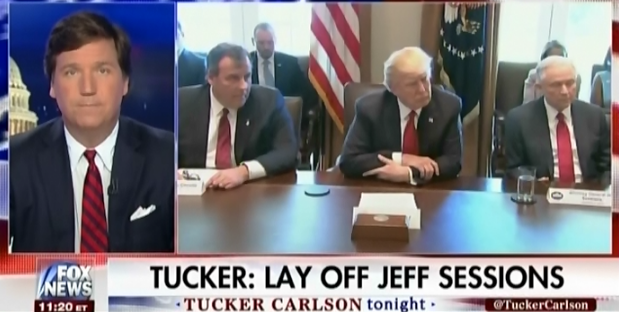 Embattled Attorney General Jeff Sessions will appear on Fox News’ Tucker Carlson Tonight as President Donald Trump continues to criticize Sessions’ decision to recuse himself from the investigation into possible coordination between the Trump campaign and the Russian government during the 2016 election. Given host Tucker Carlson’s frequent fanboying and staunch defenses of Sessions in the past, the beleaguered attorney general  will most likely enjoy a fawning, sophomoric interview during his appearance on the show.

Sessions’ planned appearance on Tucker Carlson Tonight is not the first time he has used the friendly platform to address controversies surrounding his role in the administration. During Sessions’ confirmation process for his current job, Roll Call’s Jonathan Allen highlighted the former Alabama senator’s racist past, writing in a November 15 column that Sessions was “unfit for the Cabinet” and a “partially reconstructed baiter of minorities.” In response, Carlson went to bat for Sessions; he invited  Allen on to his November 18 broadcast and lambasted his article as “one of the most unfair things I’ve ever read.” Carlson also accused Allen of “smearing” Sessions by "download[ing] some talking points from the DNC” and said Allen had impugned Sessions with “slur[s]” and “pure talking points.”

On March 2, when numerous Democratic lawmakers were calling for Sessions’ resignation in response to reports that he had met with the Russian ambassador and lied about it under oath, Sessions retreated to his safe space on Carlson’s show in an effort to defuse the firestorm. Carlson’s softball interview with Sessions included questions such as, “Do you see this as a witch hunt?”

Carlson is once again coming to Sessions’ defense, but this time around, the people aiming for Sessions are doing so from inside the White House. In a July 19 interview with The New York Times, Trump went after his own attorney general, saying, “Sessions should have never recused himself, and if he was going to recuse himself, he should have told me before he took the job, and I would have picked somebody else.” The attacks haven’t ceased, with the president repeatedly tweeting out criticism of Sessions.

Carlson, in a somewhat surprising split from agreeing with everything Trump does, leapt to Sessions’ defense and devoted a segment of his July 20 show to vouch for Sessions’ perceived value to the Trump administration. Carlson maintained that Sessions “has been the rare person in the entire executive branch making actual progress implementing the agenda his boss ran on, because he's the rare person who believes in it,” and warned that Trump should “lay off Jeff Sessions.”

TUCKER CARLSON (HOST): Sessions was worried about what an unsecured border and mass immigration would do to America, even though the biggest effects from those wouldn't be seen until decades after he was long gone from this earth. So, he jumped in and accepted Trump’s offer to become attorney general. He didn't do it to get rich, and certainly not to become more popular. He instantly became less. You’ll remember that many of his former colleagues in the Senate slandered him as a bigot during his confirmation hearings. As attorney general, Sessions has been the rare person in the entire executive branch making actual progress implementing the agenda his boss ran on, because he's the rare person who believes in it. In an administration brimming with opportunists and ideological saboteurs, people who literally couldn’t be less interested in what voters think, Sessions has never lost sight of the lessons of the last election. He’s gone after sanctuary cities, he’s enforced immigration laws, he’s ended the Obama administration's attacks on local police departments, and a lot more. He’s likely the most effective member of the Trump cabinet.

In return, the president attacked him in the failing New York Times. That’s not just criticism. It's an insult. It's also a worrisome sign that the president may be forgetting who is on his side. Goldman Sachs did not elect Donald Trump. America’s long-ignored middle class did. Trump voters may find his tweets about the media amusing, and well-deserved because, obviously, they are, but they’re not the point of this exercise. The point is to shine some light on the broad middle of this country, on the millions of normal people who are hurting and who could badly use an ally in power for the first time in a long time. Now the hope is that what happened yesterday was just a stress-related aberration, the political equivalent of yelling at your kids when you had a bad day at the office. If so, it will be not be hard to fix this. Going forward, just pay a little less attention to The New York Times, pay a little more to Matt Drudge. And for God’s sake, lay off Jeff Sessions. He is your friend. One of the very few you have in Washington.

There are many similarities between Carlson and Sessions. They both regularly villainize immigrants, and like Sessions, Carlson is beloved by neo-Nazis and white supremacists. Tonight’s interview will most likely be nothing more than a public relations stunt for Sessions.