Fox News’ Tucker Carlson had a night off on August 7, but that didn’t stop him from airing yet another interview with anti-choice extremist and spreading misinformation about Planned Parenthood. And Reddit’s “r/The_Donald” forum, where “alt-right” members supporting President Donald Trump congregate, is starting to take notice.

During the August 7 edition of Tucker Carlson Tonight, guest host Laura Ingraham -- who has her own history of spreading misinformation about abortion -- aired a pre-taped interview in which Carlson hosted anti-choice activist Abby Johnson. Although posts about abortion don’t usually gain much traction in “r/The_Donald”, the August 7 segment sparked an unusual amount of interest from users.

Since moving into a coveted primetime spot in the Fox News lineup, Carlson has seemingly made a habit of hosting anti-abortion activists and packaging their misinformation around the theme of “censorship.” Within the anti-abortion movement, alleging censorship has become a popular tactic, in which an anti-abortion group or outlet alleges it has been persecuted in order to rally followers and raise funds. Although Carlson positions his program to appeal to right-wing and “alt-right” extremists, as Media Matters noted in July, he has taken particular pains to manufacture outrage on behalf of anti-abortion guests by alleging that their misinformation has been censored by another outlet.

In the pre-taped August 7 interview, Johnson expanded beyond the typical right-wing media attacks on Planned Parenthood that often allege the organization is not an essential health care provider. Johnson additionally argued that Planned Parenthood not only had so-called “abortion quotas” -- a claim that has been soundly debunked -- but also attempted to provide patients with birth control “with a high human error rate” so they would later schedule abortions, another falsehood that is most often repeated by only the most extreme anti-abortion activists.

Pro-Trump Reddit users don’t often engage with topics related to abortion. For example, during Republicans’ unsuccessful attempt to dismantle the Affordable Care Act (ACA), a post on “r/The_Donald” about a provision of the repeal bill that would have defunded Planned Parenthood generated only two comments. Similarly, a new smear video from the discredited anti-abortion group Center for Medical Progress (CMP) that was posted to “r/The_Donald” yielded only one comment; and a post promoting a Facebook Live event of another anti-abortion group (Students for Life of America) received zero comments. On other occasions, however, threads about Planned Parenthood on “r/The_Donald” did generate a greater number of comments, but even these topped out at around 200 replies.

In contrast, a post concerning the August 7 segment of Carlson’s show generated upwards of 700 comments from pro-Trump Reddit users on “r/The_Donald.” Most notably, a number of users described the segment as a “red pill” moment for them -- a pop culture term referring to an experience that supposedly shows reality to an individual -- or as evidence of so-called “censorship” and responded by making threats against Planned Parenthood employees.

One poster wrote that “this may be the biggest redpill any of us have ever swallowed,” while another said that it was good because “we need a kick in the ass like this.” A third poster argued, “I've always said that abortion is the biggest red pill you can take. Glad to see [“r/The_Donald”] is taking it.” 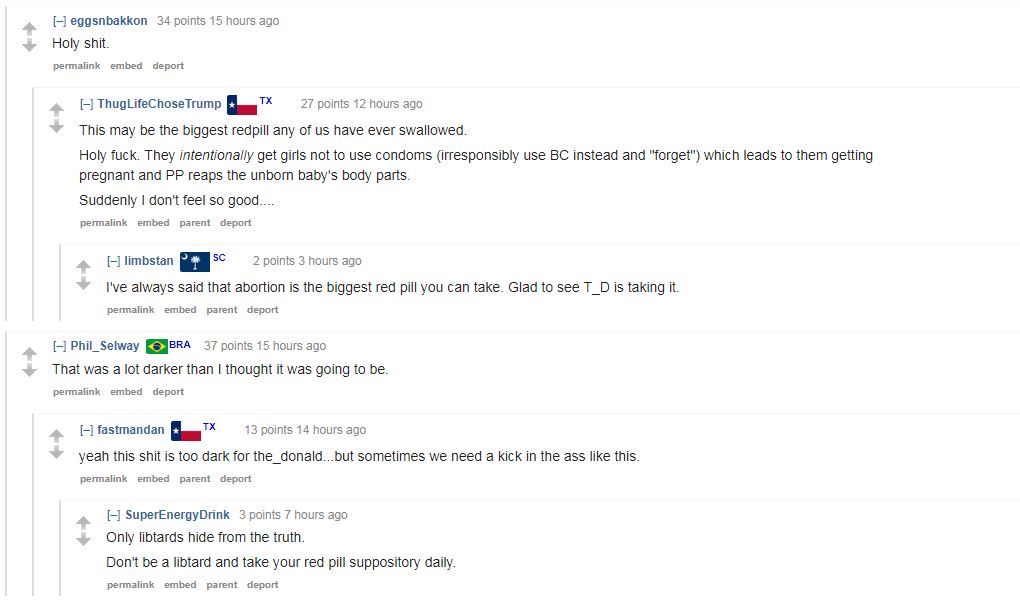 In another example, a user described the segment as “my final red pill on abortion.” 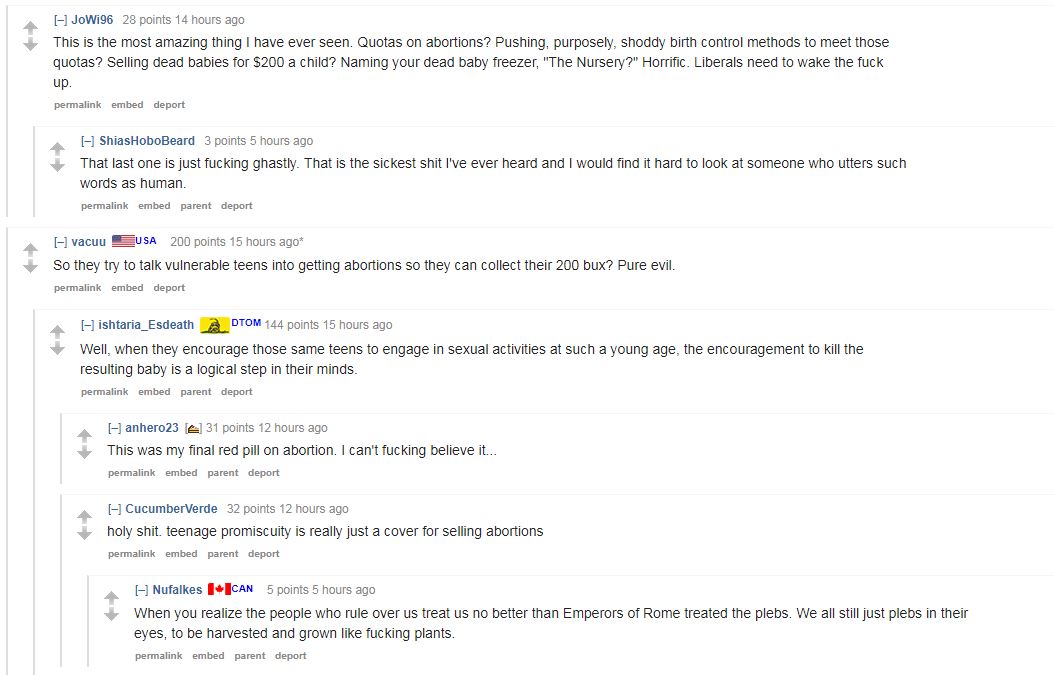 Beyond expressing general outrage about what are, in reality, inaccurate allegations against Planned Parenthood, some users went a step further and posted threatening statements against the organization’s staff and board members. One poster wrote, “DEFUND THEN (sic) BURN THE BUILDINGS DOWN,” garnering a response from another user that someone should “salt the earth once the flames have died down.”

Others argued that Planned Parenthood staff should “be imprisoned for life for first degree murder,” that “these demons are not of this earth” and that “every single person on the board of [Planned Parenthood] needs to be strung by the neck.” 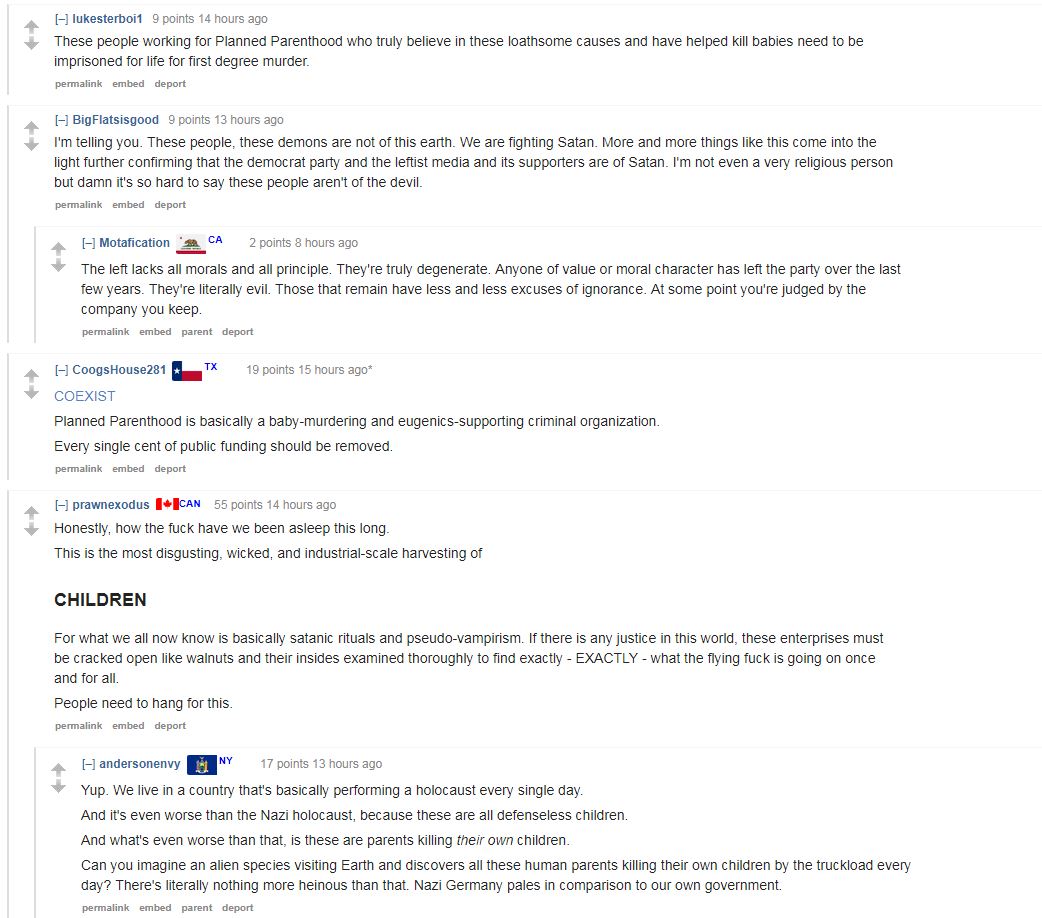 In instances where individuals didn’t call for attacks on Planned Parenthood clinics or staff, they seemingly endorsed acts of anti-choice violence committed by others. As one user wrote, “I used to think the people that attacked these clinics were nuts, but WOW.” Another wrote that they would “be okay if vigilantes started burning these places down in the night.”

After white supremacists and neo-Nazis rallied in Charlottesville, VA -- leaving one person dead and many injured -- the threat posed by radicalized online communities cannot be understated. Although Carlson may not be the originator of the anti-choice misinformation he spreads, he is specially packaging it for an audience rife with misogyny and primed for violence. And if pro-Trump Reddit’s reaction to Carlson’s segment with Johnson is any indication, these online communities are starting to take notice.