Fox News and other right-wing media outlets overhyped the threat of looting during their coverage of Hurricane Harvey last week. Some conservative blogs ran stories warning about looting that featured tweets from fake accounts, which have since been deleted. This coverage often had a racist element, either subtly or overtly accusing African-Americans of rampant criminal behavior.

In fact, looting has not been a widespread problem, according to law enforcement officials. Experts say the threat of looting is often exaggerated during disasters, and that appears to be the case with Harvey. “The Houston Police Department says very little looting occurred during the first week of flooding in the wake of Hurricane Harvey,” Snopes reported on September 1. A spokesperson for the department told Snopes, “Looting is almost non existent in Houston. People have been cooperative not just with each other, but also with Houston PD. The weather is at its worst but Houstonians are at their best.” Los Angeles Times correspondent Matt Pearce, who drove around Houston to report on Harvey, called claims of widespread looting “bullshit.”

When news outlets overhype the risks of looting and violence, it can have dire consequences, one expert told WNYC's On the Media. “The media has a responsibility here to be very nuanced in the way it talks about crime in the midst of a disaster, which is that if people are overly concerned about that, they may not evacuate,” said Scott Gabriel Knowles of Drexel University, a historian and author of the book The Disaster Experts: Mastering Risk in Modern America.

On August 30, Houston Police Chief Art Acevedo announced that his officers had arrested 14 people for looting. But in a metropolitan area with 6.6 million residents, that's not a large number.

Nonetheless, President Donald Trump's favorite program Fox & Friends played the arrests up on August 30 and scaremongered about looters, with correspondent Griff Jenkins describing them as “criminals that have unleashed the worst that humanity has to offer.”

Fox News' Tucker Carlson and his guest, former police officer and GOP congressional candidate Dan Bongino, also used over-the-top rhetoric on August 30 while discussing a tweet from ABC's Tom Llamas that described looting at a supermarket in Houston. Bongino said, “What kind of like certifiable savage man-beast do you need to be to walk into a small business [and loot]?”

Other Fox News programs inflated the looting danger too, like America's Newsroom, which featured this chyron on September 1: 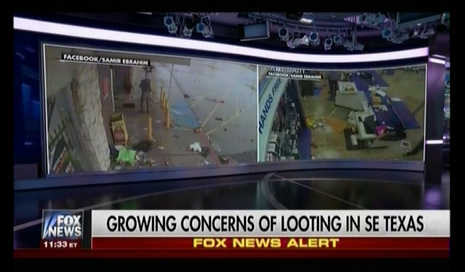 Conspiracy theorist and radio host Alex Jones, a Trump friend and ally, displayed blatant bigotry when he blamed looting on black people on his August 29 show, citing tweets he claimed to have seen. “It's got the racist black gangs are there saying, 'Look at what we looted, look at what we got.' They're putting it on Twitter, 'We're robbing the white folks, they deserve it.' And then of course there's black folks helping white folks and white folks helping black folks. It's a very small minority of scum that's doing this. But can you imagine if there were white people robbing black neighborhoods right now? And you know, I'm sure I bet some of that actually goes on.”

Other conservative outlets pushed the same false narrative, in some cases basing their stories on tweets from fake accounts. Snopes investigated a “proliferation of dozens of tweets hashtagged #HarveyLootCrew threatening widespread looting and purporting to prove that a great deal of looting had already taken place,” and found that the tweets were entirely bogus:

A series of tweets from the accounts (since deleted) of “Jamaal Williams” (@RUthlessFCB) and “Jayrome Williams” (@BrotherTooTurnt), for example, spoke of looting white neighborhoods and “racist Trump supporters”

The tweets were taken at face value by some mainstream media outlets (including Click2Houston), as well as by several right-leaning blogs such as Pacific Pundit, DC Clothesline, and Think Americana, with the latter using them as the basis for a report stating that “far leftists promote looting of homes and businesses of only Trump supporters”.

What we found when we looked at the tweets carefully, however, was that all of them were fake, originating from troll accounts set up under assumed identities. None of the photos depict anything that actually took place in Houston, much less in 2017.

It isn’t difficult to discern the motivation behind these fake tweets, which were obviously created to sow fear and racial hatred in a time of crisis.

Other, more responsible media outlets have pointed out that the frequency of looting during disasters is often greatly exaggerated. “Looting and violence are the exception, not the rule,” Brooke Gladstone, co-host of WNYC's On the Media, said while introducing a segment on the topic. “Disasters usually bring out the best in people.”

Knowles told On the Media, “Fifty years of social science research indicates that widespread looting is really pretty much a myth. … There's pretty good evidence, looking at Hurricane Sandy for example, that crime can actually go down in the midst of a disaster.”

The Washington Post cited other experts who made similar points:

In the wake of massive disasters, fears about crime and other forms of disorder almost always rise, experts say. But while some people do take advantage of the collective distraction, the fear of crime — particularly looting — typically outstrips the reality, said experts who study storms and recoveries.

There were about 63 people charged with storm-related crimes including burglary and theft from Aug. 26, the day after Harvey made landfall, to this past Thursday, according to the Harris County district attorney’s office. Harris County has a population of nearly 5 million people, including the city of Houston.

“Fears of looting are common in disasters and maybe even more common than actual looting itself,” said Andy Horowitz, an assistant professor of history at Tulane University who focuses on disasters.

“There’s no doubt that on any given day, there are people who are going to steal other people’s stuff,” said retired Army Lt. Gen. Russel L. Honore, who helped oversee the military response to Hurricane Katrina. “But what we see after these storms is a greatly overexaggerated concern.”

In the days and weeks after Katrina made landfall, major news outlets relayed reports of rape and murder inside emergency shelters — many of which were later found to be false and may have delayed aid to evacuees.

Claims of widespread looting often have a racist tinge

Knowles and Honore both pointed out that claims about looting often have racial and socioeconomic overtones, playing into negative stereotypes about poor, non-white people engaging in criminal behavior.

“There’s a bias at play," Honore told the Post. "People think that if you’re poor or black you’re always trying to steal something. These warnings about looting validate the stereotypes that people hold about poor people.”

These stereotypes were put front and center in the aftermath of Hurricane Katrina in 2005, as the Los Angeles Times reminded people last week. Two much-discussed wire-service photographs from that period showed people wading through chest-deep water with groceries: One photo that depicted an African-American had a caption describing him as “A young man … after looting a grocery store”; another photo that showed a white couple had a caption describing them as “Two residents … after finding bread and soda from a local grocery store.”

Boston Globe reporter Astead W. Herndon summed up the contrast in a tweet: “The difference between 'looting' and 'finding' is often black and white.” 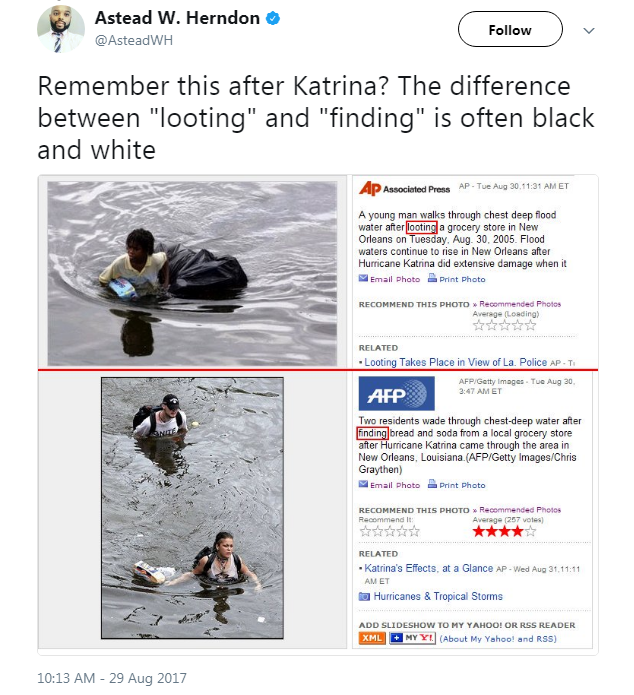 African-Americans should get extra aid during disasters, not unwarranted accusations

Black communities tend to get hurt the most by hurricanes in the U.S. “During any natural disaster such as a hurricane, low-income and under-served communities are usually the hardest hit,” according to a 2010 study by researchers at Florida A&M University. It assessed “the socio-economic vulnerability of African Americans to hurricanes at the county level in the Gulf Coast region,” and found that in nearly half of the counties, “African Americans are in a high vulnerable condition against hurricanes and natural disaster.”

The disproportionate impact on African-Americans was highly visible during Hurricane Katrina. “Katrina was not an equal opportunity storm,” wrote Gary Rivlin, investigative journalist and author of a book on the hurricane, last year for TalkPoverty.org, a project of the Center for American Progress. “A black homeowner in New Orleans was more than three times as likely to have been flooded as a white homeowner. That wasn’t due to bad luck; because of racially discriminatory housing practices, the high-ground was taken by the time banks started loaning money to African Americans who wanted to buy a home.”

After Superstorm Sandy hit in 2012, the story was similar. “Studies show that low-income and communities of color in the New York-New Jersey area were among the hardest hit by Hurricane Sandy,” wrote Pamela Worth of the Union of Concerned Scientists. These same dynamics have been playing out in Houston. And as climate change worsens and leads to more extreme disasters, experts say people of color will continue to bear the brunt.

But instead of reporting on the struggles of black hurricane victims and the ways that disasters disproportionately hurt non-white communities, some right-wing media outlets have been blaming blacks for fictional crime rampages.

Now, as Hurricane Irma barrels toward Florida, which has large black and Latino communities, should we expect to see more of the same?