As the Republican Party and corporate donors are forced to grapple with what has been perfectly apparent for a while -- the fact that Rep. Steve King (R-IA) unapologetically embraces white supremacy -- white supremacist media are stepping up to bat for him.

While it’s not a secret that white nationalists openly support King, his sympathy for them has only recently come under fire from GOP leadership. This sudden change of heart prompted users of the anonymous message board 4chan’s “politically incorrect” forum (known as “/pol/”) to gin up support for him, calling for “meme magic” to help King against the “media onslaught” supposedly trying to kick him out of Congress. 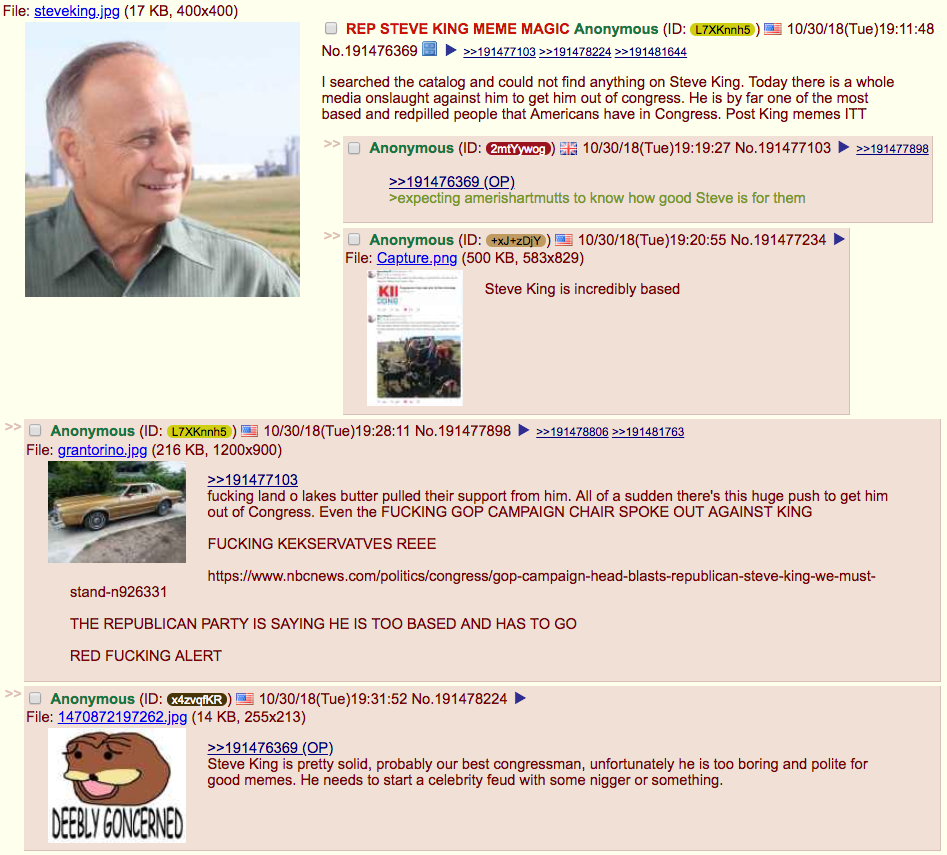 In the October 30 edition of his show America First, white nationalist YouTuber Nick Fuentes took a break from an anti-Semitic rant to praise King for “talking about white genocide,” saying, “He retweets some of our guys, and he goes over to Austria, I believe it was, and he rubbed shoulders with some of our guys. I mean, he basically gets it, he knows what's going on.”

On the October 20 edition of Third Rail, a podcast of white supremacist website The Right Stuff, the host known online as Borzoi declared, “We know about Steve King. We know what he’s all about. We’ve got Steve King’s back.”

Later on the show, in the context of a discussion mentioning The Camp of the Saints -- a “stunningly racist” anti-immigrant novel popular with right-wing media -- Borzoi mentioned King’s tweet that “we can’t restore our civilization with somebody else’s babies,” as a reference to the white supremacist conspiracy theory “the great replacement.”

King’s white supremacy rhetoric often comes in the form of dog whistles that his racist supporters hear loud and clear, as evidenced by an October 30 thread on /pol/. The since-archived thread celebrated King’s tweet which mentioned “the diversity” among the dogs present in his pheasant hunt, writing, “We had English Setters, Brittanys, German Shorthairs, and black, yellow, chocolate & white Labradors all assimilated into a fine working team.” “Steve King is a white nationalist and shitlibs HATE him for it,” wrote the user who started the celebratory thread, while another poster praised the “great line” of “comparing dog breeds to different races.” 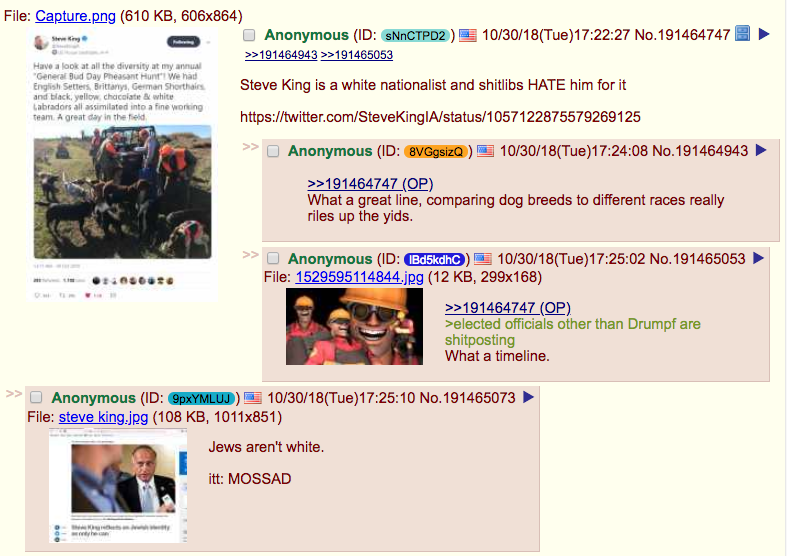 Like Fox’s Tucker Carlson, King has also earned 4chan’s affectionate title of “our guy.” An October 23 thread put forward a list of reasons why King fit /pol/’s definition of “/ourguy/,” which included “Neo Nazi” and “likes the confederacy.” Responding to the original post, another user wrote, “Of course he’s our guy.” 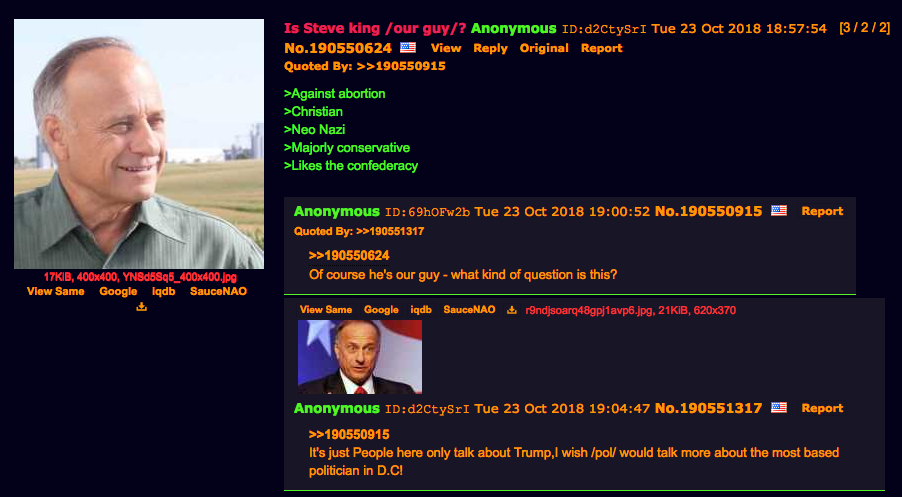 It’s not hard to see why /pol/ would consider King to be on their side. In addition to his repeated dog whistles, he’s quote tweeted neo-Nazi Mark Collett, whose YouTube channel features incendiary anti-Semitic commentary that includes videos titled “The Jewish Question Answered in 4 minutes” and “The Holocaust: An Instrument of White Guilt.” After receiving backlash for his infamous “somebody else’s babies” quote, King doubled down on the statement. The phrase and similar derivatives have become a battle cry among his supporters on 4chan, where users post it on King-related threads as a reference to “white genocide” conspiracy theories.

King also endorsed openly anti-Semitic white nationalist Faith Goldy in her unsuccessful mayoral bid for Toronto. He defended his endorsement in a media appearance, saying he had talked to Goldy “a number of times” and “took her through a lot of philosophy.” In the same appearance, King bemoaned that white nationalist “is a derogatory term today. I wouldn’t have thought so maybe a year, or two, or three ago.” Before that, King gave an interview to a far-right Austrian outlet about “his belief in the superiority of European culture over others,” his fear of “falling fertility rates in the West,” and “his belief that Europe and America are threatened by Muslim and Latino immigration.”

King reacted to the latest backlash on Twitter by posting recent endorsements of Republican congressmen and supporters and celebrating President Donald Trump’s intentions of ending birthright citizenship. King’s response to Trump’s statements echoed his fellow white supremacists on social media, leaving few outside of GOP leadership to wonder why former Klu Klux Klan leader David Duke refers to him as the “Future King of America.”