A trove of leaked chat messages reportedly from members of white supremacist group Identity Evropa shows the group’s appreciation for Fox News host Tucker Carlson. Members praised segments from Tucker Carlson Tonight and fantasized about the idea of him running for president someday.

On March 6, the nonprofit media organization Unicorn Riot released chat logs from a Discord server reportedly used by members of Identity Evropa, a group attempting to sanitize white supremacy by rebranding its racist beliefs as pro-white “identitarianism.” The chat server’s name, “Nice Respectable People Group,” reflects Identity Evropa’s focus on “optics,” a strategy of intentionally rebranding away from obvious extremism to avoid the negative press that supposedly keeps their ideas from appealing to the mainstream.

Media Matters reviewed hundreds of chat messages containing mentions of Carlson -- who extremists refer to with familiarity as “Tuck” or “Tucker” -- and can confirm that the white supremacists routinely turn on Fox News to watch him deliver messages aligned with their extremist cause. They see Carlson’s prime-time audience as an effective opportunity to rebrand themselves and get positive media coverage for their extremism.

Users in the leaked chats shared a Media Matters video that shows how closely Carlson’s rhetoric aligns with that of white supremacists like American Renaissance’s Jared Taylor (a point extremists have made as well), with users asking, “Where’s the lie?” and calling the video a “red-pill compilation” (the phrase “red-pilling,” a reference to the movie The Matrix, is far-right shorthand for radicalizing). 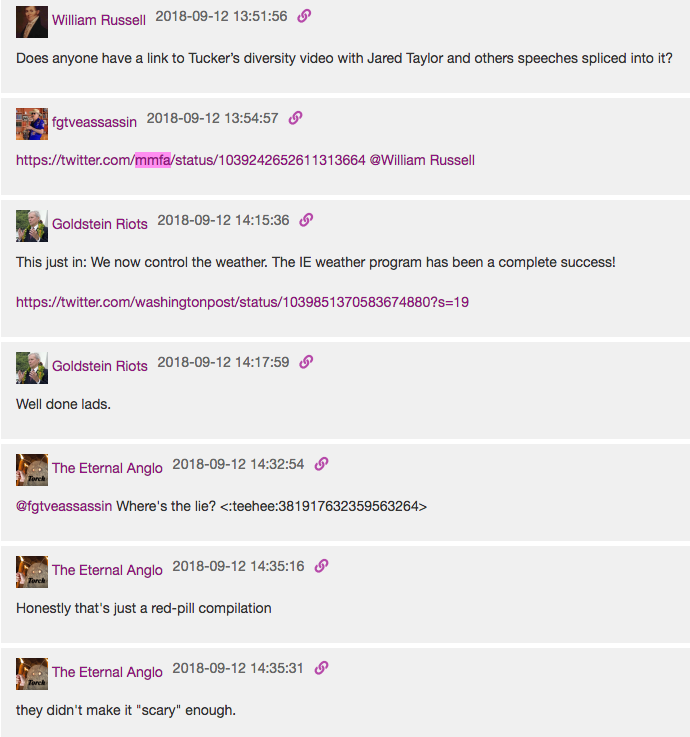 The leaked chats clearly show the admiration that some of the Discord server users have for Carlson. They include users praising the Fox host, claiming that he’s the sole reason they tune in to cable, and calling him “a lone voice of reason in the media.” Borrowing language from anonymous message board 4chan, white supremacists call Carlson “our guy” (users of 4chan have anointed white supremacist Rep. Steve King (R-IA) with the same title -- and they call far-right actress Roseanne Barr “our girl”).

The chats show many users praising Carlson for his subtlety in delivering extremist talking points as a strategic way of remaining on the airwaves, explicitly crediting Carlson with “normalizing 80% of [Identity Evropa’s] talking points,” and pointing out that figures like Carlson and Nazi sympathizer Ann Coulter “know exactly what they’re doing” to “nudge people further to the right.” It is clear is that Carlson’s fearmongering about changing demographics comes across to these extremists as an explicitly white supremacist talking point.

Members of Identity Evropa praise the Fox host for “doing divine work” that has “done more for” white supremacists than they “could ever hope to” do, while crediting Carlson’s rhetoric with moving the Overton Window, a measure of what’s considered acceptable public discourse, closer to extremism. In fact, they suggest staying within the limits of Carlson’s rhetoric to be effective with mainstream conservatives, calling it “the edge of the acceptable” and claiming that “acceptable … moves toward us daily.”

The messages also show that white supremacists consider Carlson to be an effective mouthpiece for their messages and pet narratives. They view him as an essential part of the informational “food chain” that funnels their interests to President Donald Trump, who they believe is “being exposed” to their issues through Carlson’s show. And they’re not wrong about that. Last year, a segment on Carlson’s show pushing a white nationalist narrative about South African farmers inspired a presidential tweet, exciting white supremacists around the globe. A leaked chat message shows that members of Identity Evropa actively organized an online campaign to boost Carlson’s South Africa segment using sock accounts -- online accounts with false identities -- and turn the segment into a tool for recruiting on social media.

Because they deem Carlson’s show to be a valuable platform for the white supremacist movement, some chats show users rallying to get Carlson’s eyes on stories they consider important, or discussing getting their leader, Patrick Casey, on Tucker Carlson Tonight. But to these white supremacists, Carlson is more than a useful mouthpiece, and his show is more than a valuable platform. They look at him as a thought leader and an influential thinker. A user of Identity Evropa’s Discord server promoted Carlson’s Twitter account as one of numerous “serious accounts comprising of European and American Identitarian and reactionary thought leaders.” Another user suggested Carlson’s latest book Ship of Fools as a blueprint for the group’s actions.

Additionally, Carlson’s Fox show provides his audience with a reason to build communities centered around extremism. The Identity Evropa chats show a user promoting a Carlson-themed Facebook group that was also promoted by The Daily Shoah or TDS, a fascist podcast whose hosts also admire Carlson.

The leaked chats show that Identity Evropa’s conversations about Carlson are often centered around positively discussing segments of his Fox show -- such as pushing a segment in which Carlson elevated white nationalist outlet VDare as “laying the groundwork for a White Identity politics apologetics” -- and promoting links to his Twitter videos and YouTube clips, creating an incentive for Fox News to continue profiting from extremism.

Identity Evropa’s conversations about Carlson also reflect a degree of sycophancy that includes wishful thinking about a joint Carlson-Coulter appearance at the group’s national conference and active fantasizing about having Carlson in a presidential ticket. 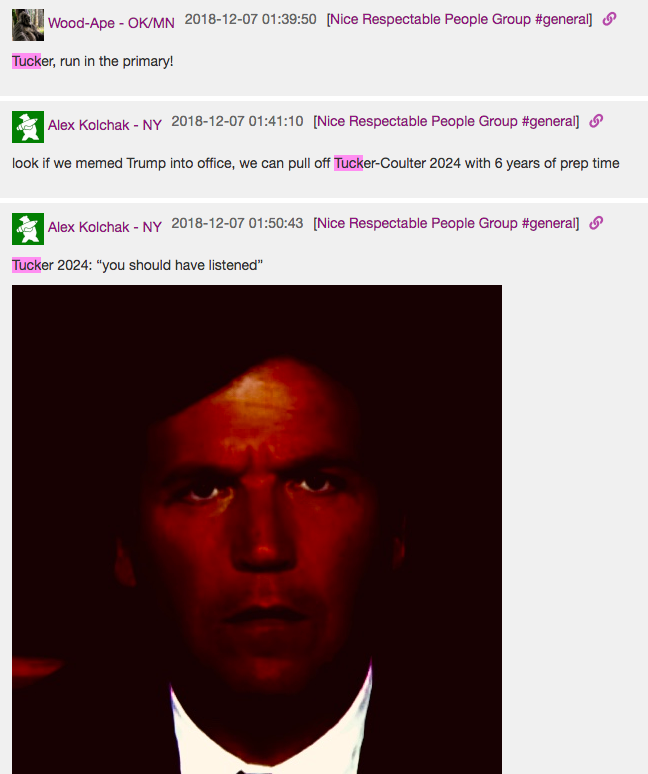