When he’s not busy harassing Teen Vogue columnists, Fox News’ Tucker Carlson has made a habit of hosting anti-abortion activists and packaging their misinformation and lies in a way that appeals to his base of “alt-right” extremists and Reddit trolls.

Since the white nationalists’ golden boy scored a prime-time spot in the Fox News lineup, he has gained a reputation for bullying and insulting his guests, deceptively editing segments, and even booking actors to represent highly curated versions of “opposing viewpoints” to his own. His most recent trick, however, appears to be hosting anti-abortion extremists and giving them a platform to cry “censorship” while simultaneously spreading misinformation about abortion.

Although Carlson is no stranger to hosting anti-abortion guests -- a Media Matters study found that he did so frequently over the span of a year -- his more recent segments have heavily relied on the false proposition that anti-abortion groups or individuals are somehow being censored.

Alleging censorship is a common tactic among anti-abortion activists to rally support and rile up sympathetic right-wing media audiences. And for his part, Carlson appears more than willing to amplify such voices and give them an even larger platform from which they can spread their misinformation to millions.

For example, on June 26, Carlson hosted anti-choice activist Lila Rose for a segment about Twitter’s alleged censorship of ads by her organization, Live Action. During the segment, Rose argued that Twitter was secretly “blocking the advertisement of pro-life speech” by not allowing Live Action to buy ads on the platform. Rose frequently referenced what she called the “hate and sensitive” policy as the reason for the ads being rejected.

In reality, the so-called “hate and sensitive” policy is Twitter’s “sensitive advertising content policy” -- guidelines that are publicly available and a far cry from being a means of censorship. Despite this, Carlson ramped up his incredulity and further sensationalized Rose’s claims, calling Twitter’s decision “an atrocity” and alleged that Twitter was treating Live Action’s tweets like “hate speech.”

Previously, Rose appeared on the May 31 edition of Tucker Carlson Tonight to promote deceptive footage from the discredited anti-abortion group Center for Medical Progress (CMP). Before her appearance, federal Judge William Orrick had barred the release of the footage, and ultimately required all copies of the illicitly spread footage be removed from the internet. Ignoring the substance of these orders, Carlson and Rose alleged the videos had been censored, and attacked Orrick for being biased. At one point, Carlson suggested that the footage should be shared in spite of the court order because “if there was ever a time for civil disobedience, it seems like some might think this would be the time.” 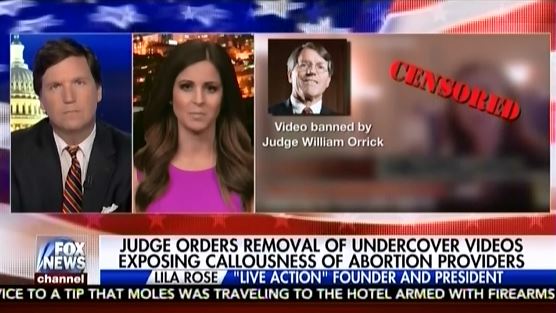 On June 9, Carlson hosted CMP founder David Daleiden on his program to continue this line of attack on Orrick and advance the narrative that anti-abortion misinformation was being censored. During the segment, Daleiden alleged he was a victim of “viewpoint discrimination” and detailed evidence of Orrick’s supposed “pre-existing personal bias and prejudice” against anti-abortion groups that should “disqualify” him from the case.

Just as with Rose’s appearances, Carlson acted as an instigator for Daleiden -- amplifying outrage, crying censorship, and fanning the already over-inflated persecution complex of his anti-choice guest. Carlson called Orrick’s order to bar the footage from release “a clear violation of free expression” and complained that it was “totally un-American” as well as “completely authoritarian and insane.” 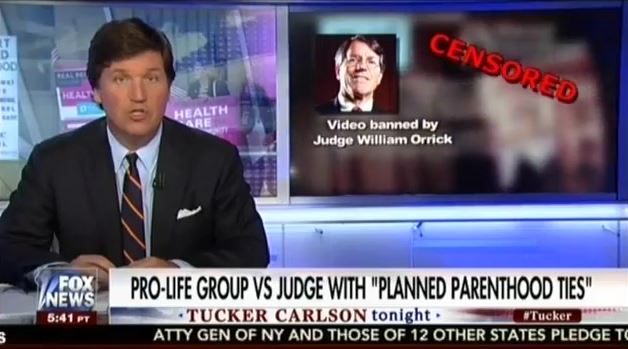 One would think that sustaining this level of outrage over exaggerated censorship claims would be exhausting, but it appears Carlson’s ability to conjure expressions of faux incredulity and take offense from phantom injury knows no bounds. And regardless of the veracity of these censorship claims, the frequency with which Carlson fuels and spreads them is a dangerous tactic meant to specifically appeal to the radicalized base of his show’s viewers.

Media Matters has consistently documented Carlson’s history of noxious commentary about any number of topics. Notably, it’s his very commitment to attacking women, people of color, and the most vulnerable -- while positioning proponents of those attacks as victims of persecution or censorship -- that has appealed to Carlson’s “alt-right” base the most. In fact, it's become common for “alt-right” and white supremacist trolls to harass guests on the program if they don't agree with Carlson's extreme views.

As Rewire’s Amy Littlefield explained, the tactic of attacking so-called media bias has also been largely embraced by the anti-choice movement. Reporting on the most recent National Right to Life Conference, Littlefield noted that there had been a “general tenor of anti-journalism throughout the conference, as speaker after speaker condemned and mocked outlets from the New York Times to the Washington Post to CNN.” In one particularly revealing moment, Littlefield noted that Daleiden refused to speak with her claiming that Rewire was not only “American Pravda,” but also “very fake news.”

Being wrong about abortion and reproductive rights is nothing new to Carlson. What’s different, though, and potentially more dangerous, is Carlson’s latest trick: manufacturing, amplifying, and ultimately over-inflating claims of censorship made by anti-abortion extremists in order to convince his radical base that it would be “un-American” not to rally behind their cause.