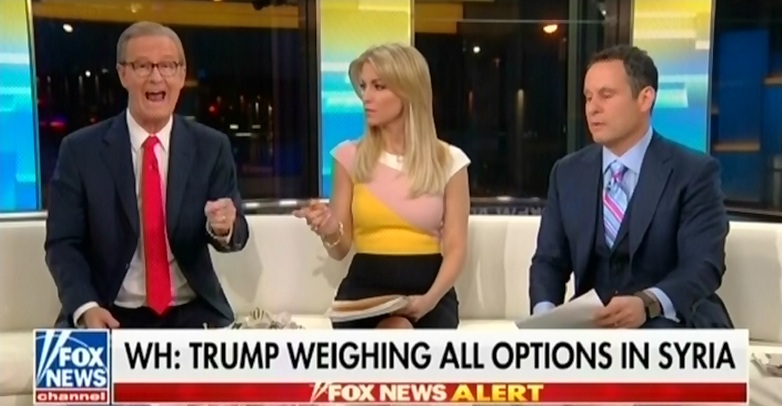 During the coverage of possible American strikes against the regime of Syrian President Bashar Assad, Fox & Friends host Steve Doocy uncritically pushed a Russian-backed smear against an organization of first responders on the ground in Syria called the Syria Civil Defence, also known as the White Helmets. While discussing the potential American response to the April 7 apparent chemical attack outside Damascus, Doocy said, “Some of it could be Russian propaganda, but I was reading this morning in Newsweek … that apparently this group called the White Helmets, … there are stories that they staged bodies to make it look like there was a gas attack.” From the April 12 edition of Fox News’ Fox & Friends:

STEVE DOOCY (CO-HOST): There are these stories out there, and you've got to figure some of it could be Russian propaganda, but I was reading this morning in Newsweek, online because there is no print edition anymore, that apparently this group called the White Helmets, which used to be the Syrian defense organization, there are stories that they staged bodies to make it look like there was a gas attack. Meanwhile, you've got Russian media saying, “We sent investigators in, our military did, and they could not find any traces of any toxins or gas on any of the bodies.”

Doocy's co-hosts Brian Kilmeade and Ainsley Earhardt pushed back on Doocy’s comment, with Kilmeade saying, “Unbelievable, they really expect us to buy that?” What Doocy inadequately stipulated “could be Russian propaganda,” is, in fact, Russian propaganda. As it has been well-documented, the White Helmets have been “the target of an extraordinary disinformation campaign” that is “propagated online by a network of anti-imperialist activists, conspiracy theorists and trolls with the support of the Russian government (which provides military support to the Syrian regime).” According to Wired, the “smear campaign” against the first responders is “designed to bolster the regime of Syrian president Bashar Assad and undermine its opponents, including the United States.”

Doocy’s uncritical parroting of a smear against the Syrian first responders comes as numerous pro-Trump and right-wing media figures, such as Tucker Carlson, Alex Jones, Michael Savage, and other conspiracy theorists have suggested the April 7 chemical attack was a “false flag.”