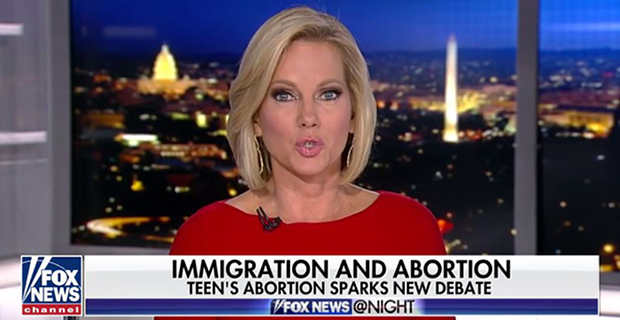 On October 30, Fox News’ Shannon Bream debuted the evening program Fox News @ Night. The show was new, but one thing stayed the same: Bream’s commitment to misinforming about abortion.

As Mic noted, Bream’s program represents a “departure from a longtime tradition” of playing reruns of other “popular primetime shows” during the 11 p.m. hour. Bream herself has attempted to brand her program as “straight news, not opinion” and claimed the program “will be straight down the middle.” In reality, Bream has a long history of presenting misleading reporting about a number of reproductive rights topics -- and if the first episode of Fox News @ Night is any indication, having her own program won’t change anything.

For example, long after the anti-choice group Center for Medical Progress (CMP) and its smear campaign against Planned Parenthood were discredited, Bream gave CMP founder David Daleiden an unchallenged platform to push misinformation. Before that, Bream had played frequent validator for CMP’s claims -- going so far as to anchor a Fox News special on its content, titled Planned Parenthood: The Hidden Harvest. Beyond her emphasis on CMP’s inaccurate contentions, Bream also has a tendency to cite polls commissioned by anti-choice groups to suggest a lack of public support for abortion access.

In back-to-back segments during the October 30 edition, Bream also hosted NARAL Pro-Choice America President Ilyse Hogue and Texas Attorney General Ken Paxton to discuss a recent case involving the Trump administration’s denial of an abortion to an undocumented minor being held in federal custody. According to BuzzFeed, the minor (referred to as Jane Doe) did not ask for “the government to pay for the procedure or arrange the transportation” -- in fact, as Politico reported, she had already “obtained the money” for the procedure. Nevertheless, Fox News’ coverage of the case has focused on a made-up idea that taxpayers should be outraged about the possibility of funding abortions for undocumented immigrants like Doe -- an offshoot of the debunked, but oft-repeated, right-wing myth of so-called “taxpayer-funded abortion.” (In fact, no taxpayer money may go to abortions under the Hyde Amendment.)

During the first segment, Bream not only pressed Hogue on a series of anti-choice talking points about the case (including the myth of taxpayer-funded abortion), but also directly channeled the concerns of anti-abortion groups. In one instance, after Hogue noted that opponents of Doe’s abortion want to “put Roe [v. Wade] on trial through this case,” Bream interjected that what she “heard from a lot of pro-life groups is they were worried this is Roe v. Wade 2.0.” Bream continued that these anti-abortion groups were concerned that Doe’s case was “not just about abortion, but it’s now encouraging -- they think -- in some ways, people coming here from other countries where maybe they can’t get an abortion.”

Bream’s comment about having “heard from a lot of pro-life groups” is unsurprising. In but one example, the afternoon before Bream’s program debuted, Marjorie Dannenfelser, president of the anti-choice Susan B. Anthony List, tweeted that Bream is a “friend” and that she “covers Life issues with fearlessness and fairness.”

The BEST. Watch and RT. Our friend @ShannonBream covers Life issues with fearlessness and fairness. https://t.co/hM8SoOXeZe

The Fox prime-time lineup has seen a lot of change over the past year. Following the ouster of Bill O’Reilly for numerous reports of sexual harassment (and more recent news of further settlements still), the network was forced to make changes to its evening talent. As a result, white nationalist golden boy and serial anti-abortion misinformer Tucker Carlson scored a prime-time spot -- a platform he has used to host anti-abortion activists and present their allegations in a way that appeals to his extremist base. In September, after Fox was forced to fire prime-time host Eric Bolling (again for reports of sexual harassment), the network announced Fox News @ Night, hosted by Bream at 11 p.m., and another program, The Ingraham Angle, hosted by longtime contributor Laura Ingraham (who has her own history of spreading misinformation about abortion).

As Variety reported, Fox executives are hopeful that the addition of Ingraham and Bream will finally “cap a flurry of schedule changes” that audiences have endured over the past year. And although Bream has pitched her show as one that “will focus heavily on politics and events in Washington” -- a choice that one media professor told Variety will offer viewers “news, not more punditry” -- audiences shouldn’t be fooled.

If the chyron previewing the abortion-related segment during the October 30 premier is any indication, Bream’s coverage of reproductive rights topics will be more of the same Fox News xenophobia and bluster: 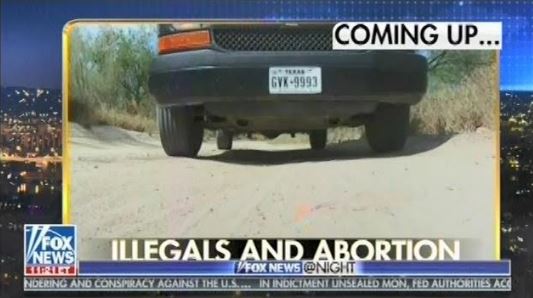