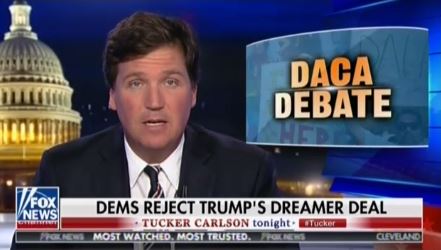 Over the past week, Fox hosts and pundits have insisted that the White House gave a “major concession” by including a pathway to citizenship to undocumented immigrants who qualify for the Deferred Action for Childhood Arrivals (DACA) program in its immigration proposal, ignoring the draconian aspects of the plan.

On the January 27 edition of Fox & Friends Saturday, co-host Pete Hegseth exclaimed, “For conservatives, citizenship and 1.8 [million] DACA recipients is a lot more than people expected this White House to give … They made that concession out of the gate.” Tucker Carlson echoed that sentiment on his show, claiming that “the White House’s proposed immigration deal gives a major concession to Democrats: amnesty.” Fox News Sunday host Chris Wallace has pushed the “huge concession” line multiple times. Washington Post columnist Marc Thiessen was the latest to make the misleading claim on the January 31 edition of America’s Newsroom:

First off, the proposal grants the Trump administration $25 billion for a border wall, a number that has been criticized as “a bloated increase from the $18 billion the White House called for just at the start of the year.”

And as the libertarian think tank Cato Institute points out, “The new plan [cuts] the number of legal immigrants by up to 44 percent or half a million immigrants annually—the largest policy-driven legal immigration cut since the 1920s.”

The proposal also pits “immigrants against one another” as it limits the scope of family reunification policies, preventing immigrants who have obtained citizenship from sponsoring certain family members and likely deterring skilled immigrants who are considering relocating to the United States. The White House proposal also expedites deportations for undocumented immigrants, effectively “strip[ping] all those people, if caught by the federal government, of their right to a deportation hearing before a judge.”

Fox's servile “major concession” drumbeat is just another example of the network sacrificing context to push the White House’s agenda.