Multiple Fox News figures and other right-wing media personalities are suggesting that former first lady Michelle Obama helped actor Jussie Smollett after his alleged attack that police say he staged. The claim comes after far-right message boards, social media accounts, and other outlets pushed conspiracy theories that the Obamas or Sen. Kamala Harris (D-CA) had been involved in the Smollett incident.

In a startling about-face on Tuesday that drove a rift between Mayor Rahm Emanuel and local prosecutors, the Cook County State’s Attorney’s Office dropped all charges against the “Empire” actor Jussie Smollett, who had been accused of staging a hate crime attack in the city’s downtown in January.

The state’s attorney’s office said in a statement, “After reviewing all of the facts and circumstances of the case,” including Mr. Smollett’s performance of community service and an agreement to forfeit his $10,000 bond payment, “we believe this outcome is a just disposition and appropriate resolution.” [The New York Times, 3/26/19]

Michelle Obama’s former chief of staff had communicated with the state’s attorney about the case, but there has been no evidence that the Obamas themselves were involved. Tina Tchen, a former chief of staff for Michelle Obama, had reached out and corresponded with State’s Attorney Kim Foxx. Tchen told Foxx that Smollett’s family had “concerns about the investigation.” From the Chicago Tribune:

Foxx reached out to Johnson after Tina Tchen, former chief of staff to first lady Michelle Obama, emailed Foxx saying the actor's family had unspecified “concerns about the investigation.” Tchen, a close friend of Mayor Emanuel's wife, said she was acting on behalf of the “Empire” actor and his family. A relative later exchanged texts with Foxx.

The exchanges began Feb. 1, three days after Smollett said the attack occurred. It would still be 2 ½ weeks before he was charged with making the story up, but some media outlets were already starting to question the actor's account, citing unnamed police sources. [Chicago Tribune, 3/26/19]

After charges against Smollett were dropped, Fox figures implied Michelle Obama was directly involved in helping the actor

TUCKER CARLSON (HOST): So, it looks to us from outside Chicago looking in like this was just a pure political deal -- somebody called somebody else. Everybody here's connected. Smollett knows people, he knows the Obamas, he knows Kamala Harris, and he somehow pulled strings to get out underneath these charges. Do you think that's right?

KEVIN GRAHAM (CHICAGO FRATERNAL ORDER OF POLICE): I think you've hit the nail right on the head. And it stinks. It was stinking from the beginning and it smells even worse now. [Fox News, Tucker Carlson Tonight, 3/26/19]

LAURA INGRAHAM (HOST): Did Michelle Obama's office have a role in shutting the Jussie Smollett case down? Now follow me here. Just days after Smollett reported his alleged hate crime to police and the Cook County State’s Attorney Kim Foxx tried to persuade police Superintendent Eddie Johnson to turn investigation over to the FBI. Now the request came after Foxx received this text, according to the Chicago Sun-Times, from Tina Tchen, A Chicago attorney and former chief of staff for former first lady Michelle Obama. Quote, “I wanted to give you a call on behalf of Jussie Smollett and family who (sic) I know. They have concerns about the investigation.” Shortly after that, a Smollett family member reached out to Foxx, having been given her number by Obama's former assistant. Well Foxx then replied in a text message that she, quote, “spoke to the superintendent,” and that she was, quote, “trying to figure out logistics.” The relative then replied, “OMG, this would be a huge victory,” referring to the FBI taking over the case. Foxx then texted, “I make no guarantees, but I’m trying.” This is so great. So let me get this straight. The top prosecutor at the office that ultimately decided not to prosecute Smollett was actively seeking to help the defendants? And this was all set in motion by Michelle Obama's former chief of staff. [Fox News, The Ingraham Angle, 3/26/19] 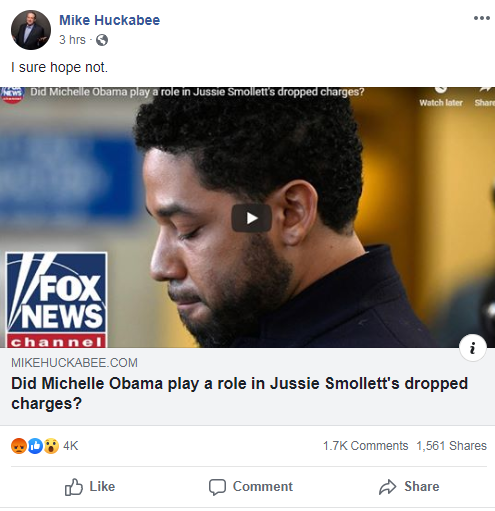 ALEX FERRER: This guy is connected. I understand he is friends with the Obamas and early in this case, Michelle Obama's chief of staff made a call to the state attorney and tried to get the investigation transferred at the request of Smollett's family to the FBI. That’s a remarkable coincidence.

BRIAN KILMEADE (CO-HOST): So you think that Michelle Obama should be questioned?

FERRER: No, I don't know that Michelle Obama had anything to do with it. But when you're connected at that high a level, there’s a lot of people who are willing to do you favors. [Fox News, Fox & Friends, 3/27/19]

BRIAN KILMEADE (CO-HOST): And real quick. You think that because of [Kim Foxx’s] link to [INAUDIBLE] the Obamas, the Obamas could somehow gain from this. How?

PETE KOCONIS: Well, if [Cook County Board President Toni] Preckwinkle does win the mayor's race, which she -- my God, she’s so far behind she shouldn't -- then it’ll be easier for them to get their library in because she’s the head, she’s the boss of bosses in the Chicago machine. She’s what -- her and Foxx are two of the people that are the machine politics now, and they have to be thrown out of office. [Fox News, Fox & Friends, 3/28/19]

RUSH LIMBAUGH (HOST): So, what would be the interest from, let's just say, Michelle Obama? We know that her former chief of staff made a phone call to Foxx, so we know that she's involved here. [Premiere Radio Networks, The Rush Limbaugh Show, 3/26/19]

RUSH LIMBAUGH (HOST): There are now stories about maybe the Obamas get involved. Tina Tchen, who is a former Michelle Obama chief of staff in the White House, is a friend with the prosecutor and a friend with the sister of Smollett, and people are wondering if the Obamas are involved in this. What in the world do they have to gain by it?

What in the world would be in it for them to be associated with this, which justifiably has people really mad about a travesty of justice? [Premiere Radio Networks, The Rush Limbaugh Show, 3/27/19]

GRANT STINCHFIELD (HOST): I can tell you this as a fact: Michelle Obama had made a phone call just days after this happened. I’m sure she thought that Smollett was telling the truth at the time. She made a phone call early on to help Jussie Smollett. They are friends of the Obamas. My question is, how high up does this go? [NRATV, Stinchfield, 3/27/19]

Family Research Council senior fellow and NRA board member Ken Blackwell posted a meme asking for Michelle Obama to be investigated. On Facebook, FRC senior fellow Ken Blackwell posted a meme with the text “Should Michelle Obama be investigated for influencing a Chicago prosecutor to drop charges against Jussie Smollett?” He wrote, “America deserves answers!” 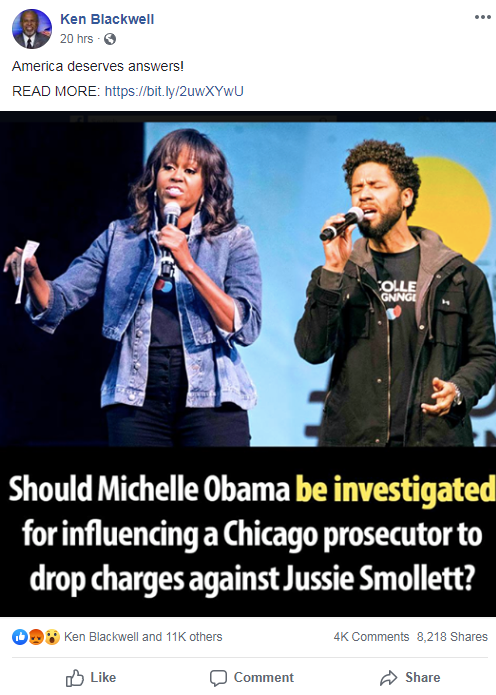 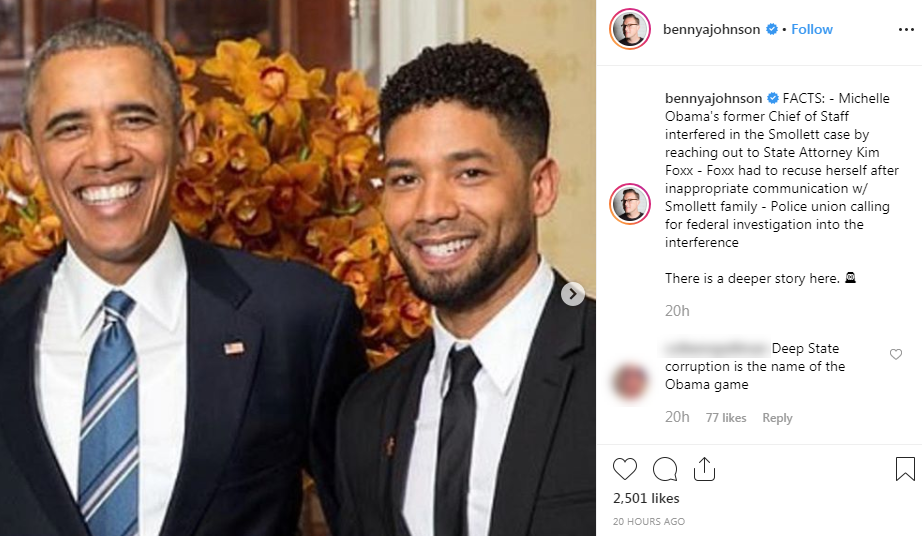 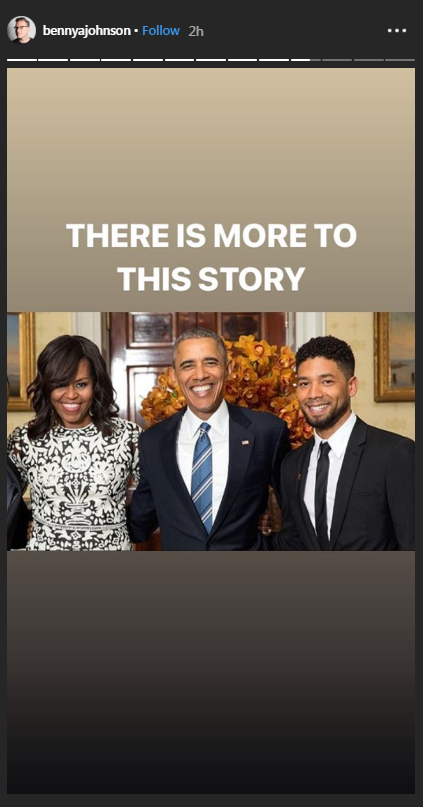 This is really interesting in the context of Mayor Emanuel’s openly-expressed fury over news of the charges being dropped. Was that merely cover for his personal connections to some of the players in this case, or was it genuine outrage?

And did Tchen reach out to Foxx because she herself is a friend of the Smollett family, or did she reach out at the request of Michelle Obama? [RedState, 3/26/19]

Twitter account @almostjingo: “Smollett sister was invited to introduce Obama during campaign, she and sis worked endless hour to have him elected.” 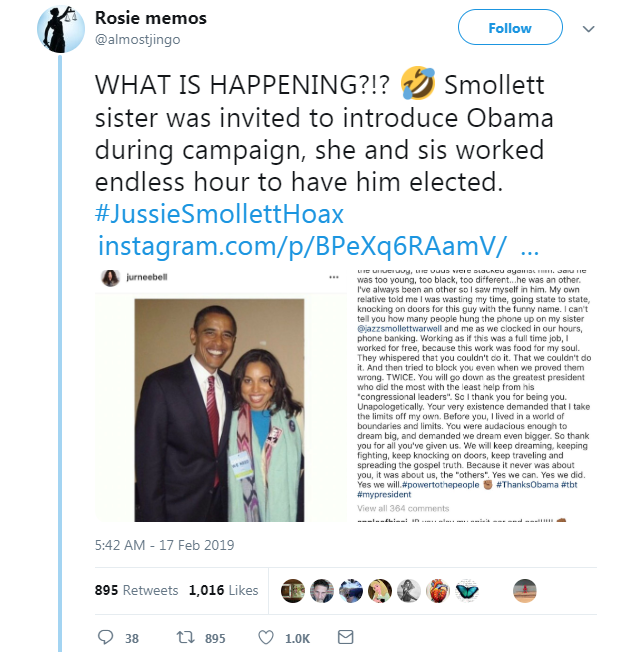 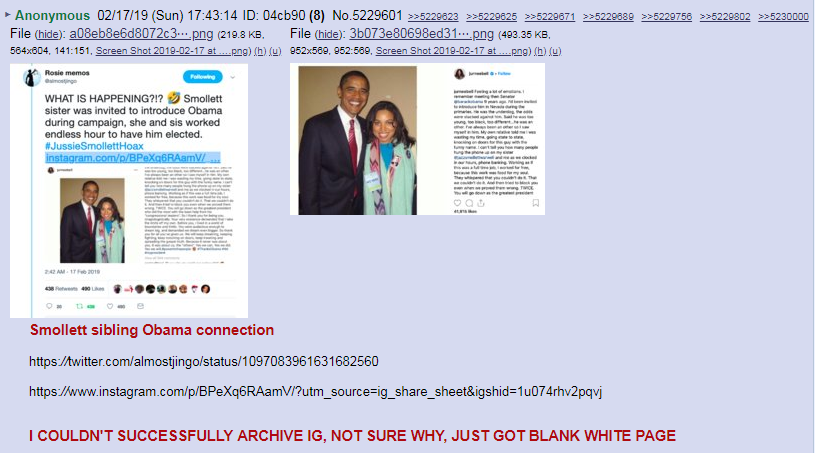 How long was Smollett’s “hate crime” story in the making?

And more significantly how many more are on the way? [Canada Free Press, 2/18/19] 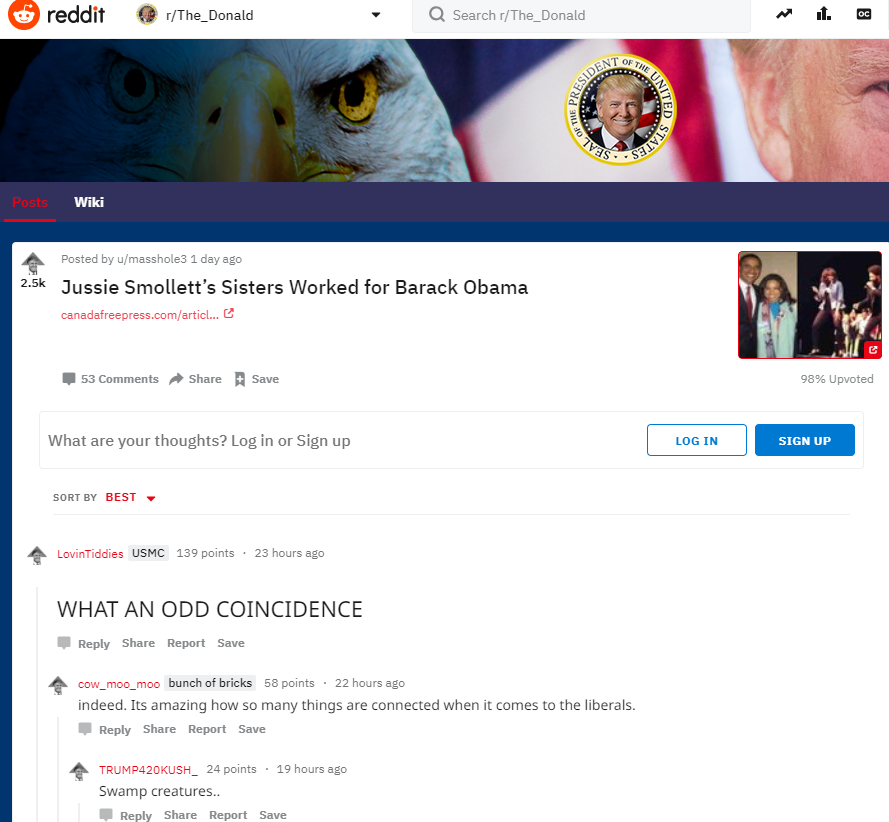 The question with Jussie Smollett's connections not only to Obama but also other Democrat establishment faces like Kamala Harris, is if you have to wonder if the Democrat establishment or even the Obama administration played a role in the Jussie Smollett 2 AM Chicago hate hoax? You can only be curious now as Jussie Smollett's connections to the Obama campaign and Kamala Harris have now come out, as the hate hoax becomes a broken narrative for the Left. [Puppet String News, 2/18/19; Media Matters, 8/23/18]

It’s curious how the former first family, who appears to have close ties with the Smollett family, has remained silent on the “attempted lynching” and “hate crime” committed against their good friend Jussie Smollett. The Obama’s silence on the “hate crime” committed against their friend is especially curious, given that the “attack” by “white MAGA hat” wearing men took place in their hometown of Chicago.

What do you think? Do you find it odd that the Obama’s, who are usually on the forefront of the race war in America, remained silent for so long on the Smollett attack in their hometown of Chicago? Did they know something that no one else knew? [100PercentFedUp, 2/18/19]

Alex Jones: “They're definitely investigating Obama and Kamala Harris and all of them, the Democrats, because they're all buddies with Smollett.” Infowars host and far-right conspiracy theorist Alex Jones claimed Obama and Harris were being investigated because “they're all buddies with Smollett.” From the February 21 edition of Infowars’ The Alex Jones Show:

ALEX JONES (HOST): Our sources told us about the national emergency. They're definitely investigating Obama and Kamala Harris and all of them, the Democrats, because they're all buddies with Smollett and the fact that he was so arrogant and connections -- they’ve now got his phone and his phone records. That's why Chicago -- he's trying to circle the wagons now and trying to whitewash this. [Infowars, The Alex Jones Show, 2/21/19]