C. Christine Fair, an associate professor at the Georgetown School for Foreign Service, found herself in the midst of a right-wing media uproar Monday over a facetious tweet about Sen. Lindsey Graham (R-SC) and Supreme Court nominee Judge Brett Kavanaugh. The right-wing outrage over the literal interpretations of her tweet perfectly illustrated how a 4chan targeted harassment campaign traveled through the pipeline to become content for Fox News prime-time programming, where host Tucker Carlson framed the tweet as an example of “white genocide,” a common white supremacist trope.

On September 29, Fair responded to a news article about Graham by writing on Twitter, “Look at thus (sic) chorus of entitled white men justifying a serial rapist's arrogated entitlement. All of them deserve miserable deaths while feminists laugh as they take their last gasps. Bonus: we castrate their corpses and feed them to swine? Yes.”

The tweet was noticed by users of notorious anonymous message board 4chan -- a site hospitable to white supremacists and planners of targeted harassment campaigns -- and a user declared an intent to “expose this bitch [Fair] and get her ass fired.” The anonymous poster included a link to Fair’s personal website and blog. The user also doxxed Fair, posting her and her family’s phone numbers found via a web search. 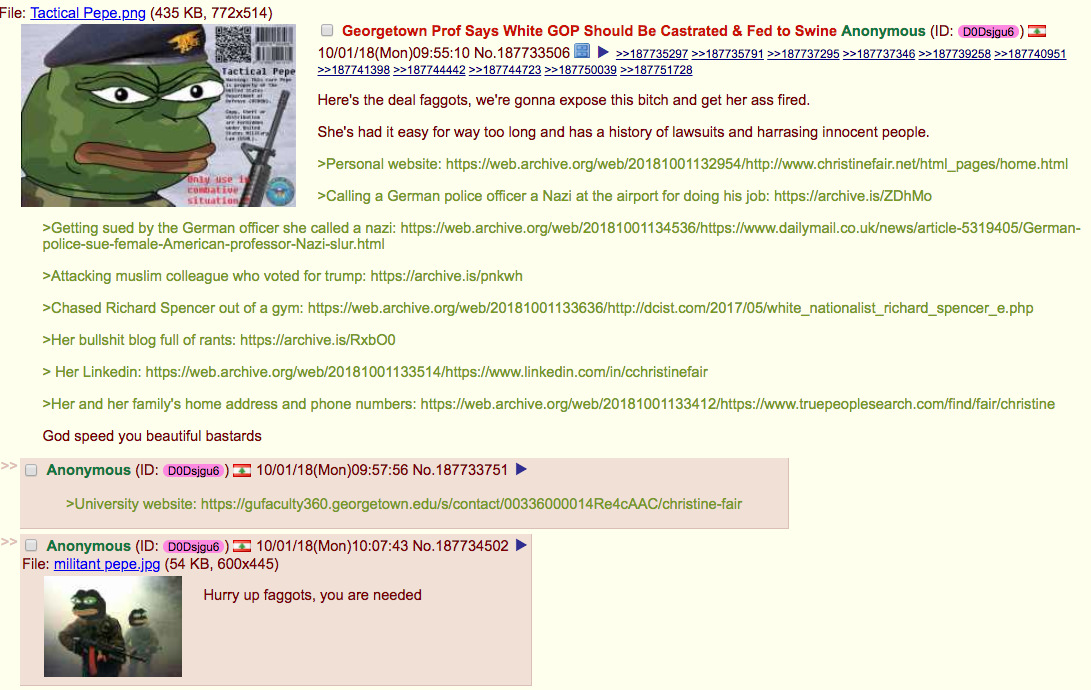 The 4chan thread time stamp indicates it was posted a little before 10 a.m. on October 1. Shortly after, at 11:31 a.m., Fox News tweeted out a story by FoxNews.com reporter Caleb Parke about Fair’s September 29 tweet.

A few hours later, the hostile backlash to Fair’s tweet had migrated from 4chan to Twitter, where users recommended calling Georgetown’s campus police and reporting Fair for threatening to castrate white men.

Right-wing outlets The Daily Caller and TownHall also jumped on the story (The Daily Caller inexplicably wrote up Fair’s tweet in two different stories, published within 30 minutes of each other). Finally, Fox News’ Tucker Carlson picked up the story on his prime-time show, using the tweet to warn his audience about the white supremacist conspiracy theory of white “genocide.” This is also not the first time Carlson has used a 4chan narrative to fearmonger on his show about the persecution of white people. Carlson often echoes white supremacist talking points on his show, earning accolades online among racists.

In another outrage thread about Fair’s tweet, on the anonymous message board 8chan (which is similar to 4chan, but with laxer standards), a user reacted to Carlson’s segment by suggesting its focus should have been more anti-Semitic. The user said Carlson should focus on three sets of parentheses surrounding Fair’s name on Twitter.

The three parentheses, or “echo,” are a white supremacist hate symbol used to identify Jewish people and organizations that anti-Semites deem Jewish-controlled. In response, some Jews and allies have reappropriated the symbol.

This isn’t the first time the outspoken professor has been targeted by right-wing media and far-right trolls.

On September 20, FoxNews.com reporter Parke wrote an article describing Fair as an “anti-Trump Georgetown professor” and characterizing a tweet she had written as a “profanity-laced Twitter rant.”

And last year, white supremacists on 4chan responded in outrage when Fair confronted “alt-right” figurehead Richard Spencer and posted her personal phone number and email address on the message board, declaring an intent to “wreck her shit.”

Fair appeared to be undaunted by the criticism -- and the harassment -- engendered by her controversial tweets. On Monday afternoon, she wrote, “Fox serves only one purpose: mobilize mobs of deplorables to harass people who are woke and sane enough to call the Fuckery the Fuckery.”