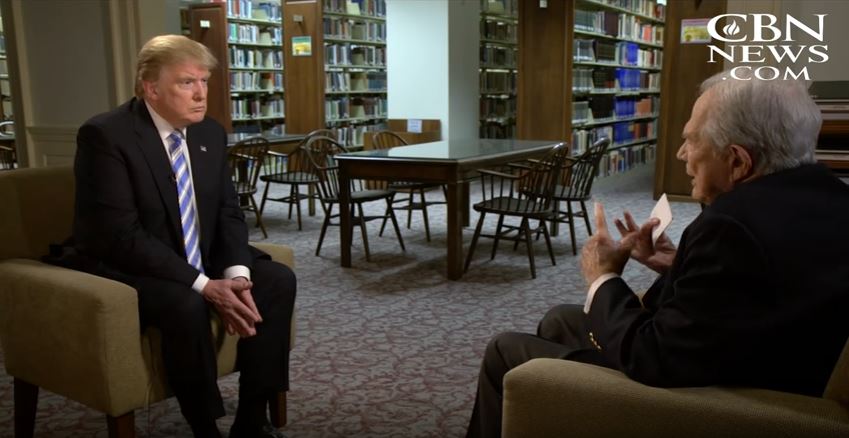 After two months of cozy Fox News interviews, President Donald Trump finally plans to sit down with another network’s host tomorrow. But don’t expect the interview to shed much light on the numerous scandals currently drowning the Trump administration. The president will be questioned by the Christian Broadcasting Network’s Pat Robertson, who has said that Trump’s critics are defying God’s will and serving Satan.

Trump has stopped granting televised interviews to media figures who aren't sycophants. According to a Media Matters review, he has done 17 television interviews since being sworn in, 12 of which were with the pro-Trump hosts of Fox News and Fox Business. He has done more interviews (four) with Fox & Friends than with ABC, CBS, and NBC combined. He has not been interviewed by a non-Fox host since his disastrous May appearance with NBC’s Lester Holt, during which he admitted that he had fired FBI Director James Comey because of his handling of the Russia investigation. Trump also has not done a full press conference since February, and his White House’s press briefings have become short, sporadic, and off-camera.

Robertson makes Sean Hannity look like Rachel Maddow. He believes that God is working on Trump’s behalf and that the president’s opponents are “not only revolting against Trump, they’re revolting against what God’s plan is for America” due to a “satanic” desire to “destroy America.”

The 700 Club host also has ties to Trump's personal attorney. Jay Sekulow has been chief counsel at the Robertson-founded American Center for Law and Justice since 1993.

Robertson has a long history of making bizarre and offensive commentary, including: