In 2017, Twitter accounts run by the Russian Internet Research Agency (IRA) repeatedly spread content that originated on TruthFeed, a pro-Trump site that has pushed fake news and has a major Facebook presence. TruthFeed also shared IRA content for its own purposes. Meanwhile, a senior adviser to President Donald Trump’s re-election campaign, Katrina Pierson, has connections to TruthFeed -- more than previously reported.

English-language IRA accounts did not just spread TruthFeed content, they relied on it. On August 15, Bloomberg’s Ben Elgin reported that between July and October 2017, publically known IRA Twitter accounts repeatedly shared content from a site (likely also run by the IRA) that copied stories from TruthFeed. By that October, content originating from TruthFeed “accounted for about 95 percent of the accounts’ English-language activity,” according to the article. A Clemson University communications professor told Bloomberg, “For a period of time, Truthfeed was central to their entire effort.” On August 10, BuzzFeed reported that IRA accounts shared content originating from TruthFeed to help fan the flames during last year's far-right gathering in Charlottesville, VA.

The relationship between the IRA and TruthFeed appears to have been mutual: During 2016 and 2017, the site regularly promoted content from IRA Twitter accounts to push numerous narratives. The site thus indirectly assisted Russia’s goal of sowing discord in the United States. That included TruthFeed sharing Russian account @TEN_GOP’s tweets to rebut claims of collusion between Russia and Trump’s campaign and to hype claims of voter fraud in Broward County, FL, before the 2016 election. Special counsel Robert Mueller directly cited the tweet about Broward County in his February indictment of several IRA employees. TruthFeed also embedded content from IRA accounts in an effort to: 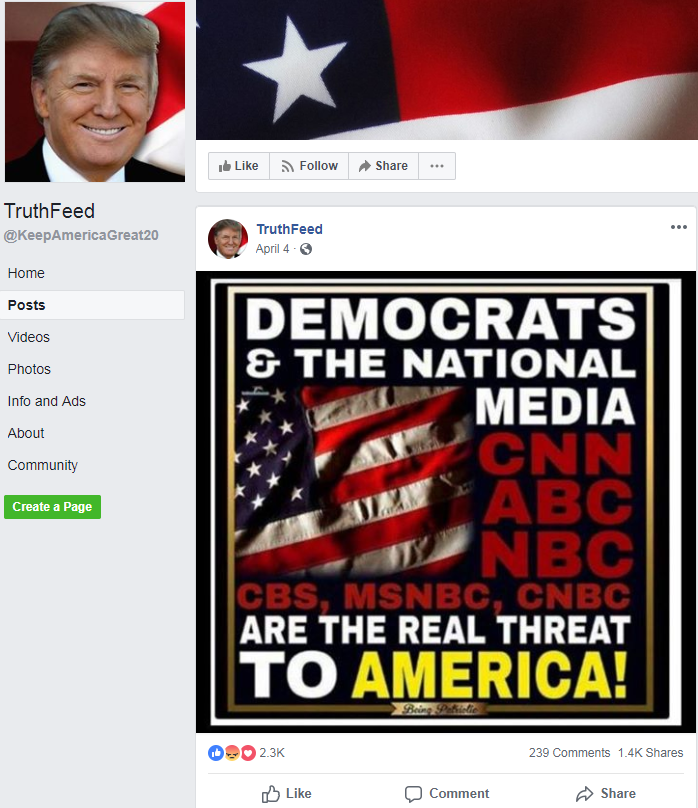 TruthFeed has frequently shared fake news: The site pushed the Pizzagate conspiracy theory, pushed a fake story that the Sutherland Springs, TX, mass shooter was a member of antifa, and claimed that the Parkland, FL, mass shooting survivors were being “coached.” The site also has links to extremists: Bloomberg's Elgin noted in November 2017 that Amy Moreno, TruthFeed’s main writer, has supported far-right and white nationalist figures.

Elgin’s initial TruthFeed investigation also found that the personal website of Katrina Pierson, who was a national Trump 2016 campaign spokesperson, shared a web hosting company, IP address, and MailChimp account with TruthFeed. Pierson’s attorney sent a letter to Bloomberg claiming Pierson “has no affiliation or connection with Truthfeed, save that her website formerly shared the same web platform.”

Yet there is evidence suggesting that there are more links between Pierson and TruthFeed than her attorney acknowledged: TruthFeed’s Facebook page and another page with more than 1.8 million followers, USA Patriots for Donald Trump, have repeatedly shared content from Pierson’s site and Facebook page, often with the same text at the same time (with TruthFeed’s page sometimes directly sharing posts from USA Patriots for Donald Trump), suggesting they are controlled by the same entity. 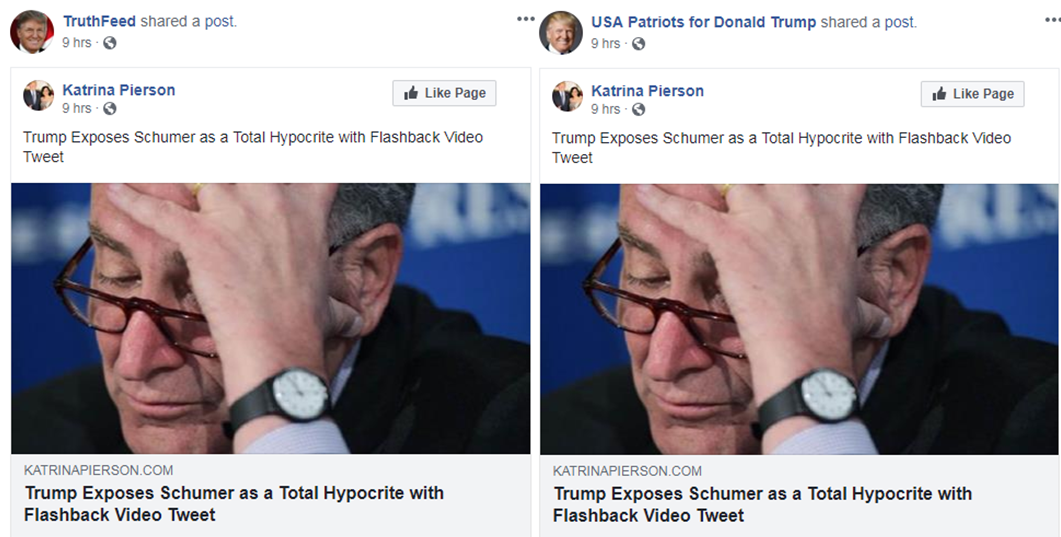 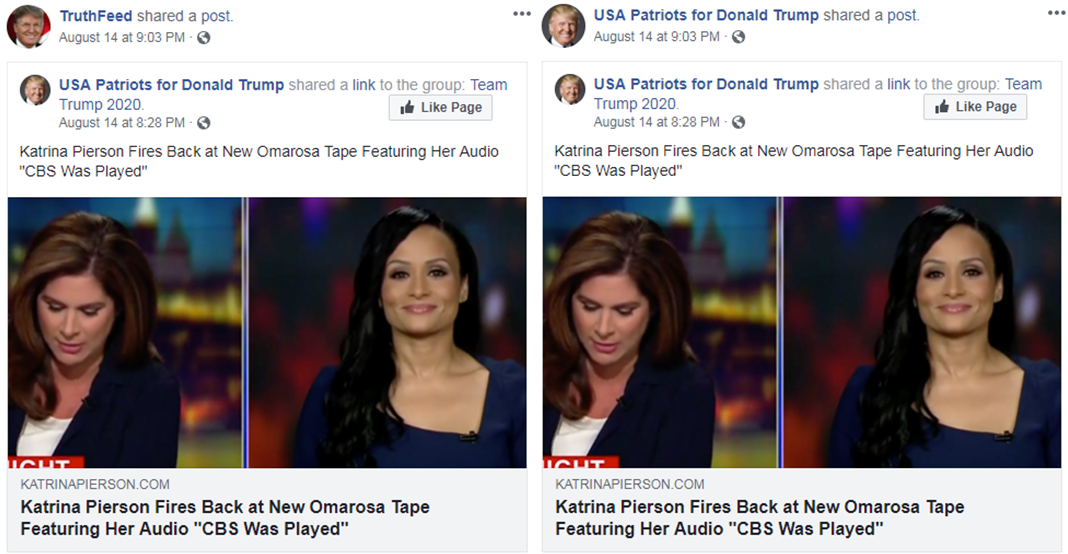 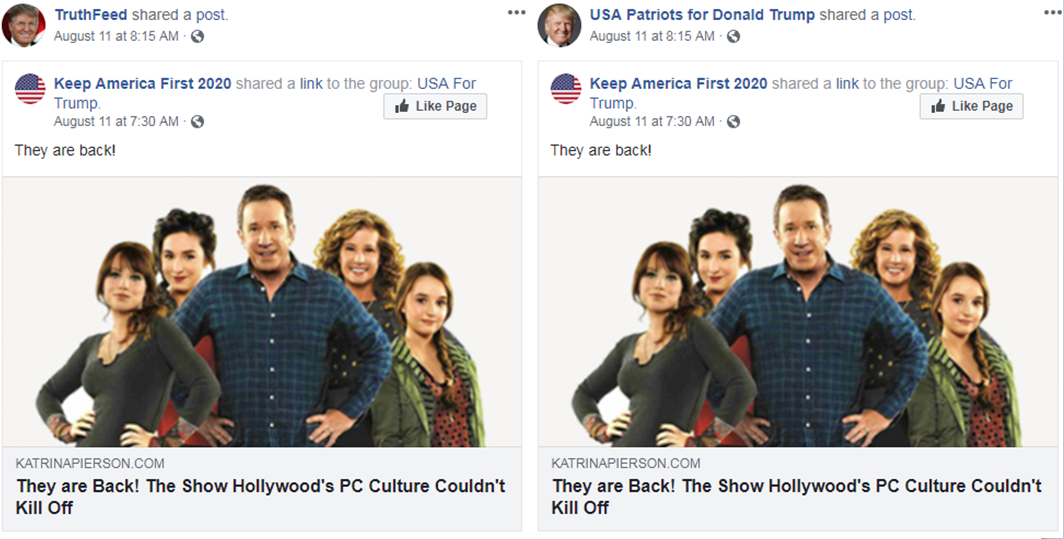 USA Patriots for Donald Trump has also repeatedly linked to TruthFeed’s content, using the same language and posting at the same time as TruthFeed’s page did.

Both pages have also repeatedly linked to a site called patriotbeat.com. That site shares two Amazon Affiliate IDs, a Google AdSense ID, and an Outbrain Template ID with TruthFeed, according to the analytic tool Trendolizer. 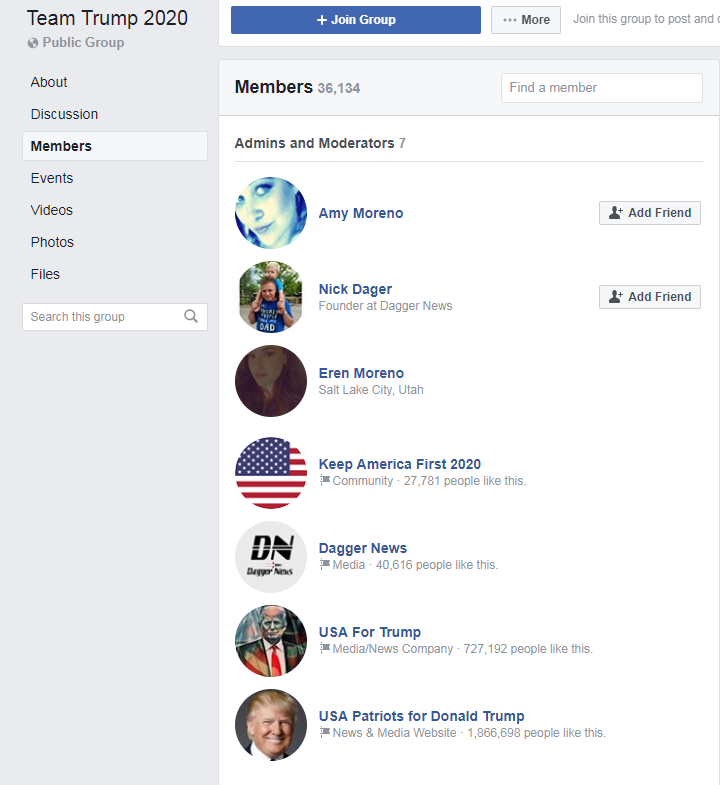 These links suggest that there are further connections between Pierson and TruthFeed than what she or her attorney told Bloomberg.