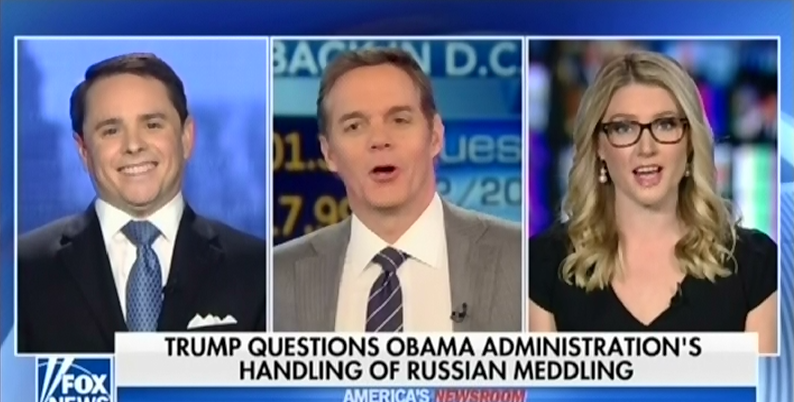 Following the indictment of 13 Russian nationals who were allegedly involved in interfering in the 2016 presidential election campaign, Fox News is attempting to cast blame on the Obama administration and deflect scrutiny from Senate Majority Leader Mitch McConnell (R-KY) for his role in blocking the administration from alerting the country prior to the election.

On Fox News’ America’s Newsroom, Josh Holmes, former chief of staff to McConnell, sought to blame former President Barack Obama for not stopping the Russian influence campaign, asking, “What in the world [was Obama] doing for the last two years” he was in office to prevent the Russian interference during the 2016 campaign.

But Holmes seems to have conveniently forgotten that his former boss shot down Obama’s efforts to “generate bipartisan support for an American response to a foreign attack” and refused to sign a bipartisan letter in August 2016 that would have explicitly warned the American public about the Russian influence efforts during the ongoing campaign. Former Vice President Joe Biden recently (though not newly) explained that the Obama administration specifically sought a bipartisan, “united front to dispel concerns that going public with such accusations would be seen as an effort to undermine the legitimacy of the election.” According to The Washington Post, McConnell even “voic[ed] skepticism that the underlying intelligence truly supported the White House’s claims” of Russian interference. While McConnell’s office claims that McConnell signed onto a bipartisan letter that was sent to the National Association of State Election Directors to warn the state officials about possible hacking attempts, according to Politico, “That missive ... did not address Russia specifically, or the larger topic of influence beyond voting systems.”

Despite McConnell’s refusal to cooperate with Obama's efforts to call out Russian influence efforts before the elections, Fox anchor Bill Hemmer attacked the Obama administration, saying it “didn't get around to even acknowledging [the Russian interference] until October of 2016.” From the February 20 edition of Fox News’ America’s Newsroom:

JOSH HOLMES (FORMER CHIEF OF STAFF OF SEN. MITCH MCCONNELL): Well, what I think is particularly galling here is that, if you were to listen to some of those players that you just named over the last six, eight months, they would have you believe that the entire Russian, quote unquote, “collusion investigation” started, and began, and ended within the confines of the Trump campaign. And what we've now come to find out through the Mueller indictments over the last month is this has been going on from 2014. So I think it's a legitimate question, beyond a legitimate question, to ask what in the world they were doing for the last two years?

HOLMES:  Everybody has sort of conflated the election with this Russian interference. The election itself, there is absolutely no evidence that any votes were changed, as you said, Bill. But the Russian interference is real and it dates back to 2014, and it’s something that we’ve really got to get a hold on. What is extremely concerning to me is that for two years we went through a basic understanding that they were trying to do what they were going to do, and the Obama administration didn't get around to even acknowledging it until October of 2016.