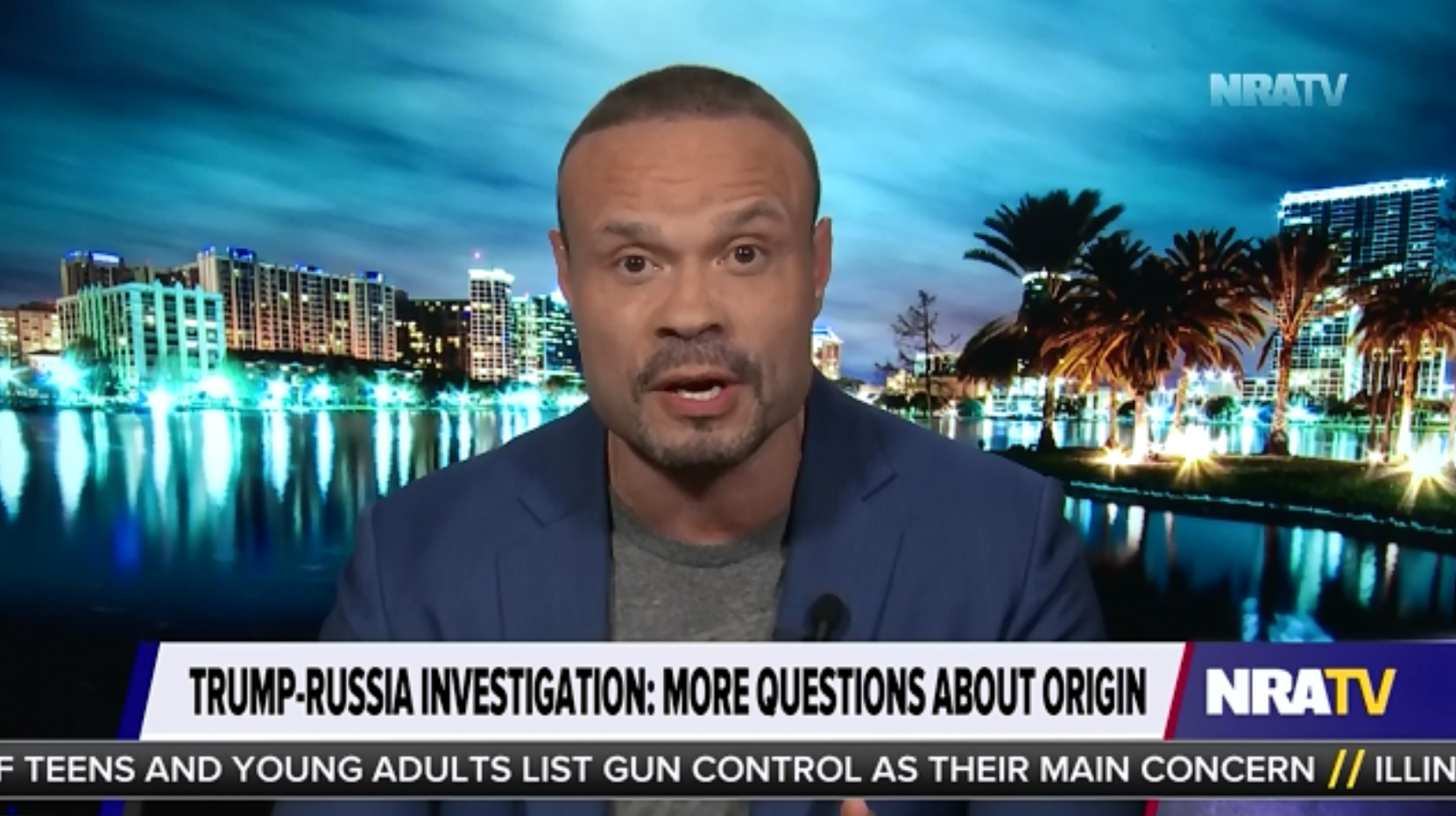 While the National Rifle Association deals with its own scandal surrounding Russian interference in the 2016 presidential election, NRATV hosts have spent the last few months attempting to discredit special counsel Robert Mueller’s “scam” investigation of President Donald Trump including, calling for Mueller to be “fired.”

Following reports that Trump knew about a June 2016 Trump Tower meeting between Donald Trump Jr., Jared Kushner, Paul Manafort, and a Russian lawyer, NRATV We Stand host Dan Bongino repeatedly insisted last week that while the meeting was “a bad idea” by an “inexperienced campaign,” the administration has been “completely transparent” about it. Yet the president’s lawyers have acknowledged that he “dictated” a falsehood-filled July 2017 statement claiming the meeting was about adoption rather than allegedly incriminating information about Democratic presidential candidate Hillary Clinton.

DAN BONGINO (HOST): Trump Tower meeting, a bad idea. I get it. It was an inexperienced campaign -- they probably get it too. They’ve been completely transparent about it, they put the information out there, nothing of value was exchanged, nothing, I mean, of information value -- I’m not talking about cash value; they don’t need this woman’s cash. And just to throw one more angle in this, to completely throw this thing into the -- throw a monkey wrench into the Clinton machinery here. I don’t know if you heard this, but the two Russians who actually showed up to the Trump Tower meeting with Don Trump Jr. -- you ready for this one? You ready? The two Russians that show up were connected to the Clintons and the people the Clintons hired. You can’t make this up. I’m not making this up.

This latest defense follows months of the NRATV shilling for the Trump administration and trying to discredit every new development in the Russia investigation.

After the FBI raided former Trump lawyer Michael Cohen’s office, Bongino called the investigation a “disgrace” and said, “Fire Bob Mueller, fire this guy now,” during the April 9 edition of his show. One month later, he said, “The whole thing is a scam and the entire story’s falling apart” because “it started for political, not law enforcement or counterintelligence, reasons.” During the June 4 edition of NRATV’s Stinchfield, Bongino and host Grant Stinchfield agreed that the president “could pardon himself” if needed but that the political ramifications of that move would be uncertain, which is one reason why the investigation “should just be disbanded.”

Following Deputy Attorney General Rod Rosenstein’s testimony before the House intelligence committee about the Mueller probe and his fiery exchange with Rep. Jim Jordan (R-OH), Bongino said Rosenstein should have “toned down the attitude a little bit” and claimed that “we should have fired this guy yesterday.” For his part, Stinchfield called Rosenstein “an utter disgrace,” said he showed “disrespect and utter arrogance,” and said that “it is clear he thinks he is better than everyone else.” He also speculated that the “deep state ... exists and Rosenstein is the leader.”

Stinchfield and Bongino also questioned the timing and content of indictments against 12 Russian intelligence officers, released on July 13, days before Trump and Russian President Vladimir Putin met for a summit in Helsinki. During the July 13 edition of We Stand, Bongino tried to use the indictment to discredit the Mueller investigation, saying, “There is no mention in the indictment anywhere of collusion. None, zero, zilch, nada, nothing. It’s not there, you’re not going to find it. Is this the best the Mueller team has?” The following Monday, Stinchfield called Rosenstein “a thorn in the president’s side” and said that he believes everything in the indictment but that it was released days before the summit to “undermine President Trump.”

All this while the National Rifle Association is knee-deep in questions about whether Russian money was funneled through the organization to help Trump during the 2016 presidential election. Most recently, we’ve learned that federal investigators are tracing “suspicious financial transactions” involving Russian national and NRA associate Maria Butina, who was charged with “conspiring to covertly serve as a Russian agent seeking to influence the National Rifle Association and other U.S. political groups.”

While NRATV has been happy to run defense for the president, it has been reluctant to address reports of Kremlin involvement in the NRA.