Today on Townhall.com, columnists Floyd and Mary Beth Brown are arguing for a filibuster of Supreme Court nominee Elena Kagan, claiming that she is a radical:

Consider this: Elena Kagan is a radical. Barack Obama and his allies in the left-wing media have made every attempt to paint Kagan as a “moderate,” but this truth is evident if you listen to her answers. She has a life-long history of extreme and radical left-wing political activism and her personal history clearly indicates that she will not hesitate to pursue Obama's far-left wing agenda from the bench.

Specifically, the Browns parrot the tired claims that Kagan has socialist views and that she banned military recruiters from campus. We've debunked these myths on several occasions.

And furthermore, it is the height of irony for Floyd Brown to be attacking someone else as radical. Brown is perhaps most famous for being the creator of the infamous Willie Horton ad that stoked racial fears against then-Democratic presidential candidate Michael Dukakis.

Brown is also a birther, having falsely claimed that President Obama has not proven “definitively that he is born in the United States.”

In addition, Brown has pushed for President Obama's impeachment. From an October 8 column by the Browns:

As a moderator of discussion on the blog www.exposeobama.com, Floyd has observed the discussion of impeachment is mushrooming amongst conservative activists.

Impeachment is no more or less than the recall of an elected official who isn't up to the job. Obama deserves recall much more than Gov. Gray Davis, and he was replaced by Gov. Arnold Schwarzenegger in a special recall election Oct. 7, 2003, in California.

America is a monument to the triumph of freedom. When Barack Obama thinks about freedom, he sees a world in which some people, due to personal initiative and good fortune, will do better than others. In that regard, he is right. But Barack Obama sees that as unfair. Where you see freedom, liberty and the opportunity for any American to be all that he or she can be, Obama sees greed and bigotry.

Like so many on the far-left before him, going all the way back to Karl Marx, he believes that it's his mission to promote “equality of outcome” over “equality of opportunity.” This worldview makes Barack Hussein Obama a very dangerous man, and a threat to your personal liberty.

Worldview explains why he has gobbled-up major banks and why the government now controls more and more of our money. And if you wake up one day to discover you're broke, don't be surprised. Barack Hussein Obama is Bernie Madoff with the political power of the presidency at his disposal.

Worldview explains why Obama intends to take away your freedom to choose your own doctor and your own treatment. Wherever government controls health care, bureaucrats decide who gets treatments, transplants, dialysis and costly medication.

The groundswell of calls for the impeachment of Barack Hussein Obama is growing.

Finally, if that is not enough evidence that Brown should be ignored, he is also the editor of ExposeObama.com, a conservative website that recently ran a Washington Post story entitled “Obama: Our First Female President” , but added the following epically bad Photoshop job: 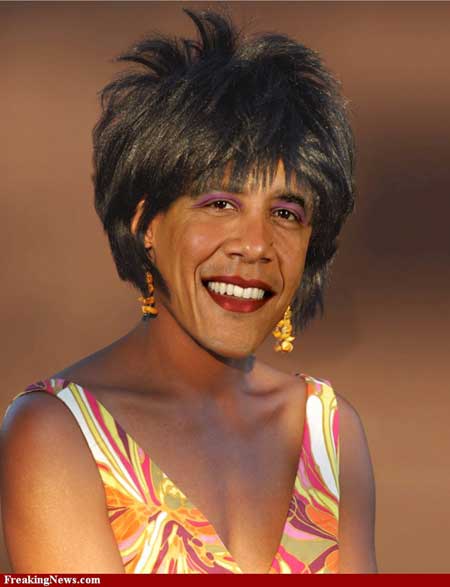