With the Senate Health, Education, Labor and Pensions Committee poised to vote on the Employment Non-Discrimination Act (ENDA) on July 10, anti-LGBT activists are ramping up their misinformation campaign against the legislation, which would prohibit employers from discriminating against employees and job applicants based on sexual orientation or gender identity.

ENDA Has Been Introduced In Congress By A Bipartisan Group Of Senators. According to the Huffington Post:

Hoping to get a lift from the changing tides on gay marriage, a bipartisan group of senators introduced legislation Thursday that would ban job discrimination based on sexual orientation or gender identity.

The Employment Non-Discrimination Act, or ENDA, has been introduced in Congress regularly since the mid-1990s without ever being passed. But given the public discussion on gay rights over the past year, Sen. Jeff Merkley (D-Ore.), a co-sponsor, told HuffPost he thinks the bill has about as good a shot as ever in the Senate. [Huffington Post, 4/25/13] 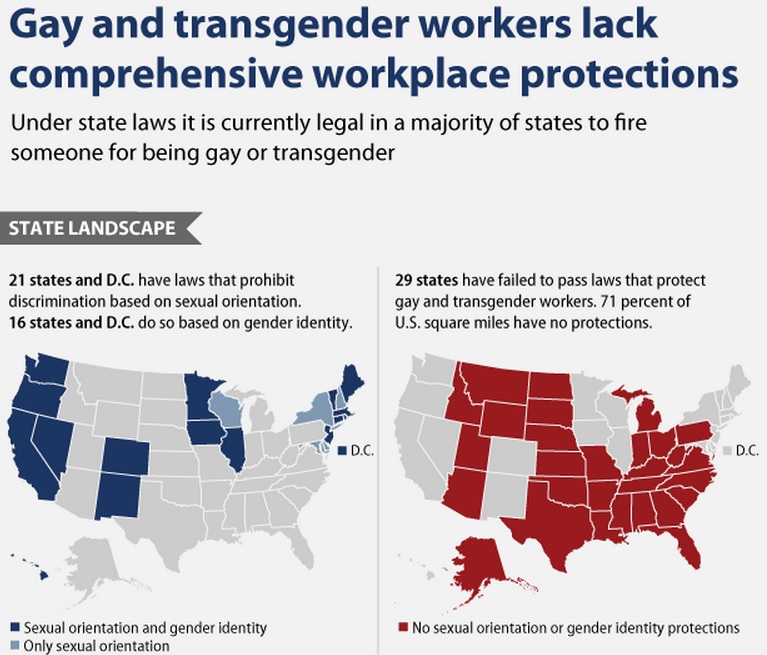 FRC: Christian Organizations Will Be Forced To Employ People Who “Parade Their Proclivities Into The Workplace.” In an Action Alert posted on its website, the Family Research Council (FRC) claimed that ENDA would force religious organizations to employ LGBT workers:

It will force Christian schools and colleges, Christian-owned businesses, day care centers, and other organizations to employ people who make their sexual behavior an issue as they parade their proclivities into the workplace. [FRC Action Alert, 3/5/13]

TVC: Religious Organizations Will Be Forced To Hire People “Whose Behavior Is In Violation Of Their Religious Tenets.” According to a Traditional Values Coalition (TVC) brief on ENDA:

The threat from ENDA doesn't stop there. The religious liberty of citizens who disagree with allowing transgenders to teach children in the classroom is also at risk, and it's not just the classroom that's impacted. If ENDA passes, Christian businesses, Christian camps, Christian counselors, Christian child care, Christian bookstores, and Christian TV and radio stations will be forced by ENDA to hire individuals whose behavior is in violation of their religious tenets. [TVC Brief, October 2012]

WND: ENDA Enshrines “Special Protections” For LGBT Employees. According to a June 14 article in WND:

A Senate committee, for the first time in years, is giving serious consideration to the Employment Non-Discrimination Act, which in spite of its title is intended to provide special “protections” for homosexuals and transgender persons in workplaces across America. [WND.com, 6/14/12]

ENDA-the Employment Non-Discrimination Act-is dangerous. It feeds on freedom, primarily the freedom of religion and speech: not in theory, but on a practical, everyday level. It leaves few freedoms behind.

Yes, the bill has a fair-sounding name, but in fact, ENDA would give special rights to men and women who engage in homosexual behavior. [FRC Action Alert, 3/5/13]

FRC: ENDA Gives “Special Rights And Protections” Based Solely On Sexual Behavior. According to a February 25 FRC mailer to supporters:

Certainly to you and me, the very idea of ENDA-giving special rights and protections to people based solely on their sexual behavior-is outrageous. But to this pro-homosexual President and the totalitarian homosexual lobby, it's a reasonable way to advance their cause-and crush the biblical view that stands in their way of fundamentally transforming America. ENDA is massive leap forward in redefining America, undercutting traditional morality, and investing unprecedented power in the homosexual minority. [FRC Mailer, via Right Wing Watch, 2/25/13]

HRC: ENDA Extends Already Existing Employment Protections To Include Sexual Orientation And Gender Identity. According to the Human Rights Campaign:

- Prohibits employers, employment agencies, and labor unions from using an individual's sexual orientation or gender identity as the basis for employment decisions, such as hiring, firing, promotion, or compensation.

- Provides for the same procedures, and similar, but somewhat more limited, remedies as are permitted under Title VII of the Civil Rights Act of 1964 and the Americans with Disabilities Act. [Human Rights Campaign, accessed 7/3/13, emphasis original]

NAACP: ENDA Extends Current Protections That Prohibit Discrimination On The Basis Of Race, Gender, Religion, Etc. According to an Action Alert from the National Association for the Advancement of Colored People (NAACP):

This legislation would extend civil rights protections that are currently based on race, religion, gender, national origin, age and disability to include gays and lesbians. It would prohibit employers from making decisions about hiring, firing, promoting or compensating an employee based solely on their perceived sexual orientation or gender identity. [NAACP Action Alert, 5/7/13]

The gender identity provisions, meanwhile, undermine the right of employers to impose reasonable dress and grooming standards, by forbidding employers to use the most fundamental standard of all -- that people be dressed and groomed in a way that is culturally appropriate for their biological sex. [CNN.com, 3/22/13]

ENDA Allows Employers To Continue To Implement Dress Codes. According to Section 8 (a) of ENDA:

Nothing in this Act shall prohibit an employer from requiring an employee, during the employee's hours at work, to adhere to reasonable dress or grooming standards not prohibited by other provisions of Federal, State, or local law, provided that the employer permits any employee who has undergone gender transition prior to the time of employment, and any employee who has notified the employer that the employee has undergone or is undergoing gender transition after the time of employment, to adhere to the same dress or grooming standards as apply for the gender to which the employee has transitioned or is transitioning. [S.815, Employment Non-Discrimination Act of 2013, accessed 7/2/13]

Liberty Counsel's Staver: ENDA Would Cause Bathroom Sexual Assault. During the June 12 edition of VCY America's Crosstalk, Liberty Counsel Chairman Mat Staver claimed ENDA would put “individuals at risk” of being sexually assaulted, which could “result in significant damage and even death”:

So you can go into these restrooms or changing rooms, if you're a man, and want to go in and molest, or watch, or sexually assault young girls. So, I mean, the absurdity of this is just beyond understanding how someone could be in favor of it. This will ultimately, in addition to colliding with religious liberty, in addition to forcing a radical agenda on people, this also will put individuals at risk and ultimately result in significant damage and even death of some individuals. [VCY America's Crosstalk, via Right Wing Watch, 6/12/12]

The logic of the argument that allowing transgender people to use a bathroom consistent with their gender will create a risk to women's safety rests upon an assumption that those who are registered sex offenders will use false claims of gender identity disorder to gain access to women's spaces in order to commit sex crimes. This assumption is disproven by experience.

There are 13 states and a hundred cities with gender identity civil rights ordinances, beginning with Minneapolis in 1975. There are over 491,000 registered sex offenders in the U.S. There are over 270,000 sexual assaults per year in the U.S.

FRC: Employee With Bible On Desk Could Be Fired Because Of ENDA. According to a February 25 FRC mailer to supporters:

But if ENDA becomes a federal law, I have no doubt activists will use it to provoke a confrontation-and try to silence us through legal action. If they silence us, they silence you!

So I strongly urge you to take decisive action today.

To keep Christians from being fired for their faith...

To keep a Christian from being terminated for “anti-gay harassment” simply because he kept a Bible on his desk....[FRC Mailer, via Right Wing Watch, 2/25/13]

ENDA prepares the way for a form of reverse discrimination -- against anyone who expresses disapproval of homosexual behavior. The more open homosexuals become, the more people with traditional values will be forced to conceal their views. This can happen even if the employee's views are expressed outside of work (as happened to Allstate's Matt Barber, who was fired), and when no reference is made to sexual orientation (as happened to the City of Oakland's Good News Employee Association, which was forbidden to speak about “family values”). [CNN.com, 3/22/13]

Gender Identity Expert: There Is A “Clear Line” Between Religious Belief And Anti-LGBT Harassment. According to Dr. Weiss:

Reason.com's Shackford: Workplaces Have “Evolved” To The Point Where Anti-LGBT Employment Discrimination Is No Longer A Serious Issue. In a blog post for Reason.com, associate editor Scott Shackford wrote:

Yes, there is a lengthy history of anti-gay employment discrimination in the United States that goes back decades. But workplaces have “evolved” far faster than the government has. Even if we were to set aside libertarian support for freedom of workplace association and distrust of expanding government regulation (and I'm not suggesting you do), it's still worth asking the question of whether ENDA would actually accomplish anything culture and business economics isn't managing on its own. [Reason.com, 4/25/13]

Williams Institute: “Widespread Discrimination” Against LGBT Employees Continues. According to the executive summary of a July 2011 report by UCLA's Williams Institute on Sexual Orientation Law and Public Policy: