Fox Nation host Tomi Lahren slandered a sitting senator and a 2020 presidential hopeful by accusing her of racism and amplified a hoax that originated from anonymous message boards. In the days since, Fox News has done nothing to hold Lahren accountable.

Four days after Sen. Elizabeth Warren (D-MA) announced that she was launching an exploratory committee to run for president in 2020, Lahren shared with her 1.2 million followers on Twitter the slanderous accusation that Warren had a racist ornament in her kitchen: 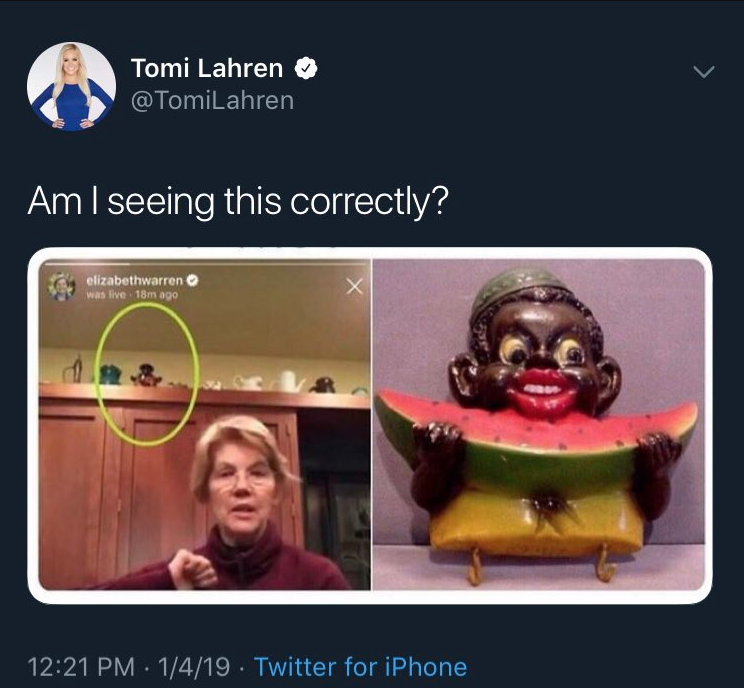 The screenshot of Warren’s kitchen is from a live Instagram Q&A session she did on New Year’s Eve. Lahren was amplifying and spreading a hoax that previously was spread in the anonymous message board 4chan and “r/The_Donald” subreddit on Reddit, in which a vase was misconstrued to be a racist figurine of a Black child eating a watermelon. As documented by Right Wing Watch, Lahren deleted her tweet but did not apologize or provide clarification to her massive audience. Fox News not only failed to acknowledge the slander, but Lahren’s Fox Nation shows, First Thoughts and Final Thoughts, continued to stream as scheduled on Fox’s online platform. The network also continued to book Lahren on its cable morning program, Fox & Friends.

Lahren’s Twitter feed is a constant stream of inaccuracies, falsehoods, and vitriol. She once apparently echoed the idiotic conspiracy theory that white supremacist Jason Kessler (who organized the 2017 racist “Unite the Right” rally in Charlottesville, VA) was a tool of the left. She tweeted that watching immigrants getting tear-gassed at the border was the highlight of her Thanksgiving weekend. And just this week, Lahren baselessly claimed that the remittances that undocumented immigrants send to their home countries are used to fund “cartel and criminal organizations.” Fox News kept her on air and even gave her a hosting gig on Fox Nation.

The network ignoring its host amplifying a easily-debunked hoax from 4chan shows the garbage that the network finds acceptable. The network also recently gave a pass to Rep. Steve King (R-IA), after King embraced white supremacy in an interview with The New York Times. Fox covered the story for a mere 42 seconds, framing its coverage as King “fighting back against a New York Times article” (a reference to King’s statement in response to the Times article).

What Fox does find unacceptable, however, is cursing. The day after Rep. Rashida Tlaib (D-MI) said “impeach the motherfucker” in reference to President Donald Trump, the network gave 52 minutes of coverage to her comment -- 74 times more than it gave to King’s white supremacy.