There are no tailored TikTok policies specifically addressing safety for the LGBTQ community. Instead, the platform's community guidelines relevant to protecting the LGBTQ community are folded into TikTok's “organized hate” and “hateful behavior” policies barring users from directing hate toward an individual or groups based on their “sexual orientation, sex, gender, gender identity,” among other characteristics.

LGBTQ rights organization GLAAD analyzed LGBTQ safety on TikTok in its Social Media Safety Index released in May. In its recommendations, it noted that “TikTok must prioritize improved practices and systems to reduce anti-LGBTQ hate and extremist content.”

Anti-LGBTQ content not only slides under TikTok’s radar but seems to be actively promoted by the company’s algorithm.

Let’s be clear: No one knows exactly how TikTok’s “For You” page algorithm is formulated. We have a rough idea, as TikTok has explained that recommendations are based on a number of factors like user interactions, video information, and device settings.

When you open TikTok and land in your For You feed, you're presented with a stream of videos curated to your interests, making it easy to find content and creators you love. This feed is powered by a recommendation system that delivers content to each user that is likely to be of interest to that particular user.

Does this mean TikTok identifies a user as homophobic and tailors their feed to that interest? It appears so.

Although the content of the videos which TikTok recommended varied, hatred of the LGBTQ community remained a constant underlying theme. Here are some examples:

“Yall need to be ended asap,” wrote one user. 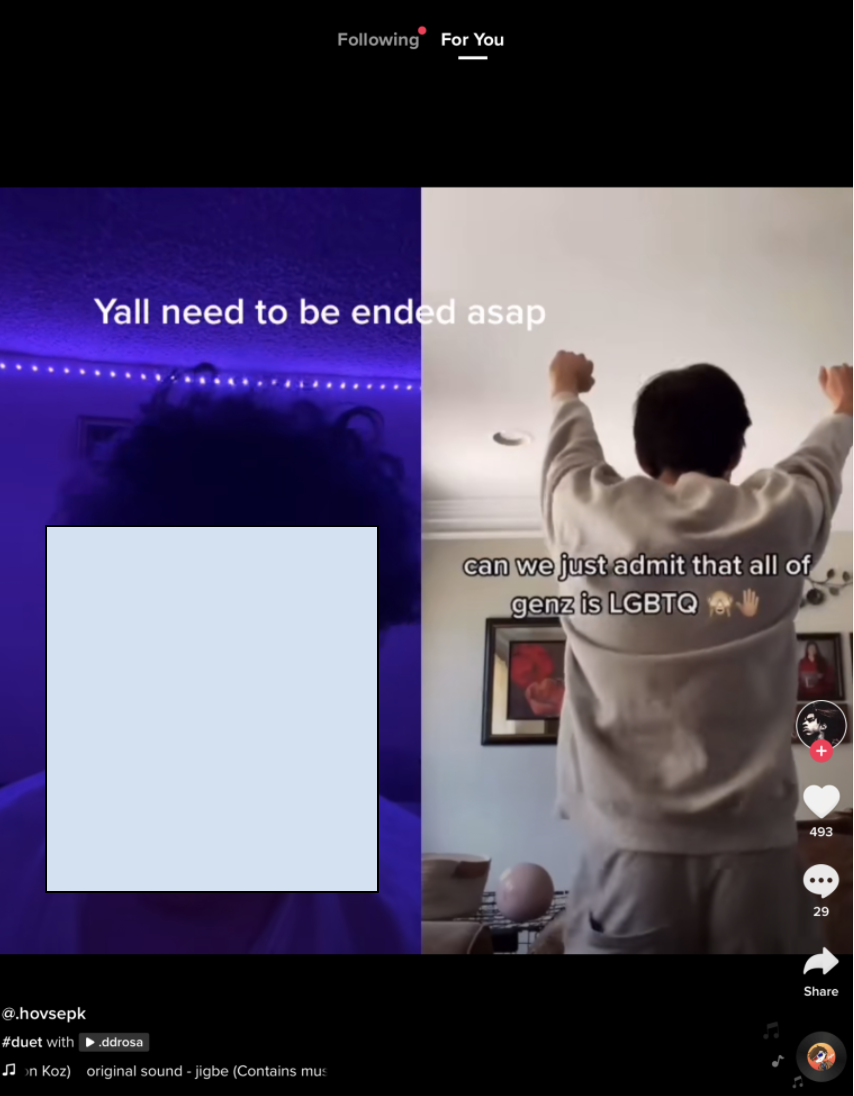 Another user stitched a video of someone claiming they were shoved against a wall and called an anti-gay slur and just laughed at it. (Stitching is a TikTok feature people can use to “clip and integrate scenes from another user's video into their own.”) 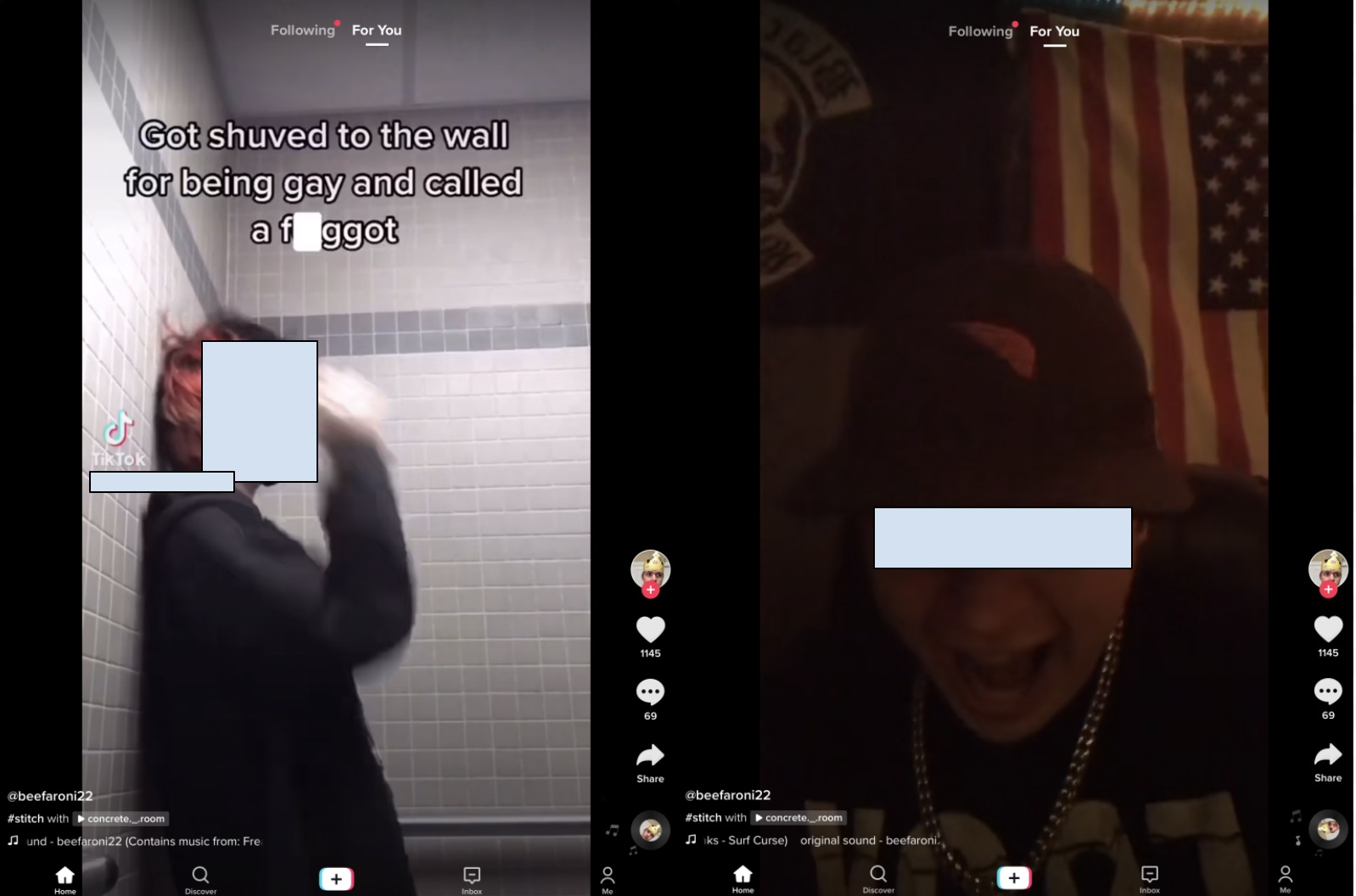 One user made a video about the “safest countries for LGBTQ,” but listed only those countries where being gay is criminalized. Users in the comments encouraged this, writing that “if you are LGBTQ plz go to one of these places it’s your only hope for a good life” and that “they love you [in Russia] get flags and scream it.” Another user encouraged physical violence against trans men, uploading a video of two animated people fighting with the overlaid caption: “Me when I see a Lgbtq Transboy.” Other users hyped up the poster, commenting under the video that it is “top tier content” and that “I did that to someone” in real life. 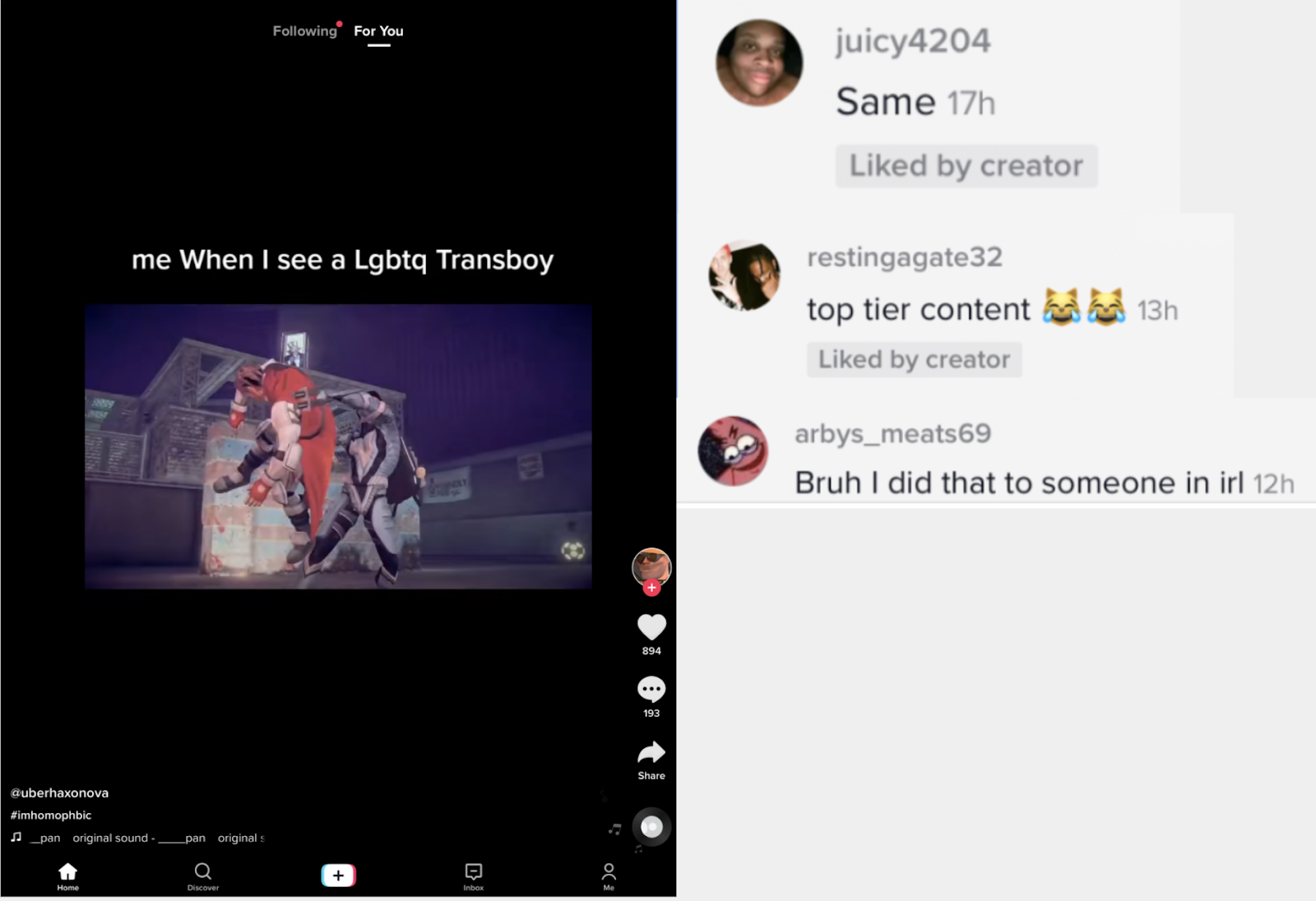 “So that’s 89% of them,” wrote one user in the comments. “Just put that in my bio,” wrote another, with a crying/laughing emoji. “So basically all of them over age 35,” said a different user. 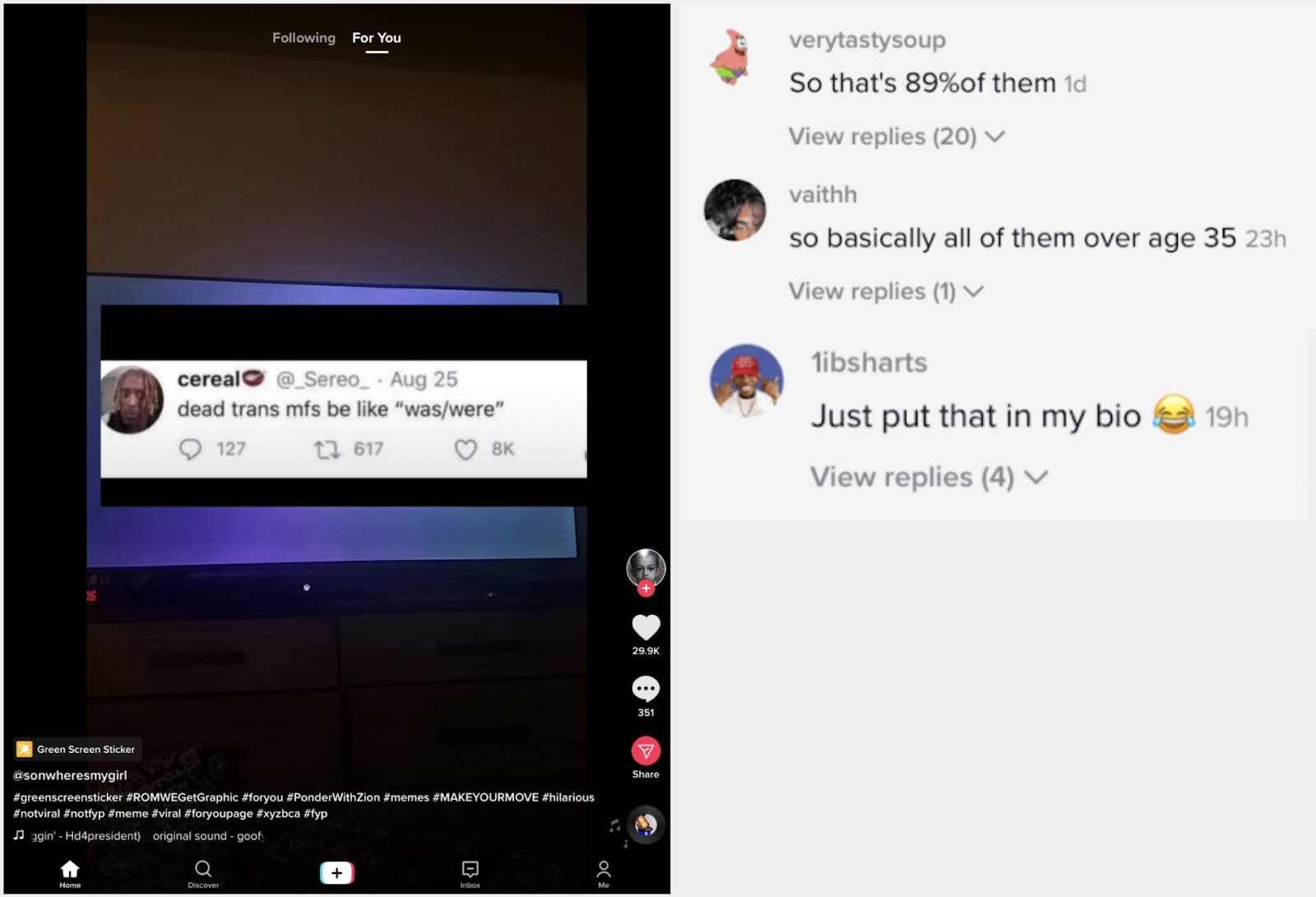 Videos encouraging homophobia or the building of “the biggest straight community” are actively circulating and gaining support on TikTok. “Only homophobic ppl follow me,” read the overlaid text on a TikTok video. Another read, “POV: YOU LIKED BECAUSE YOUR HOMOPHOBIC.” 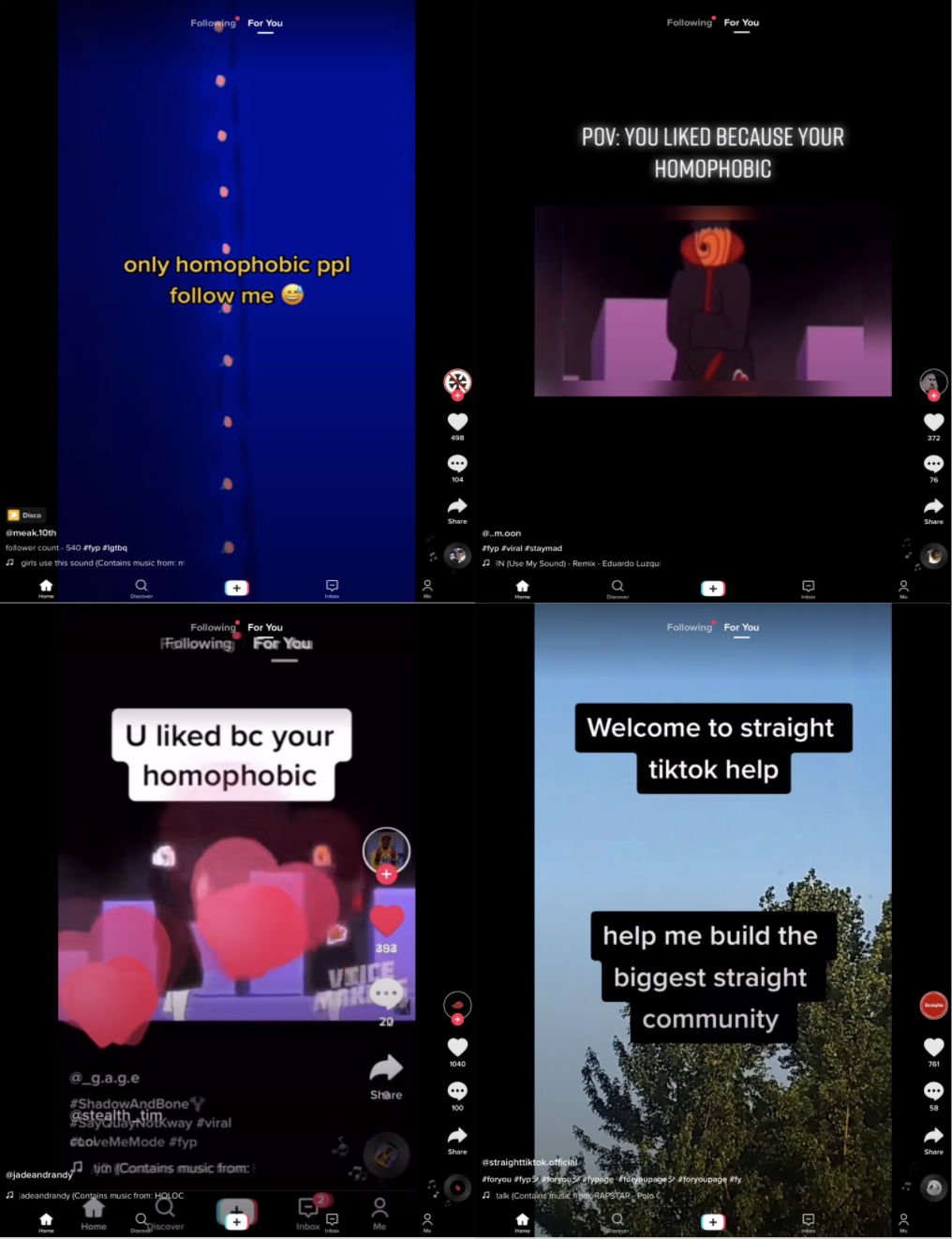 “Comment ‘I’ if your homophopic,” wrote another user in overlaid text, and in response, users did just that: “I will always be I,” “I was born homophobic and forever will be,” “I.” 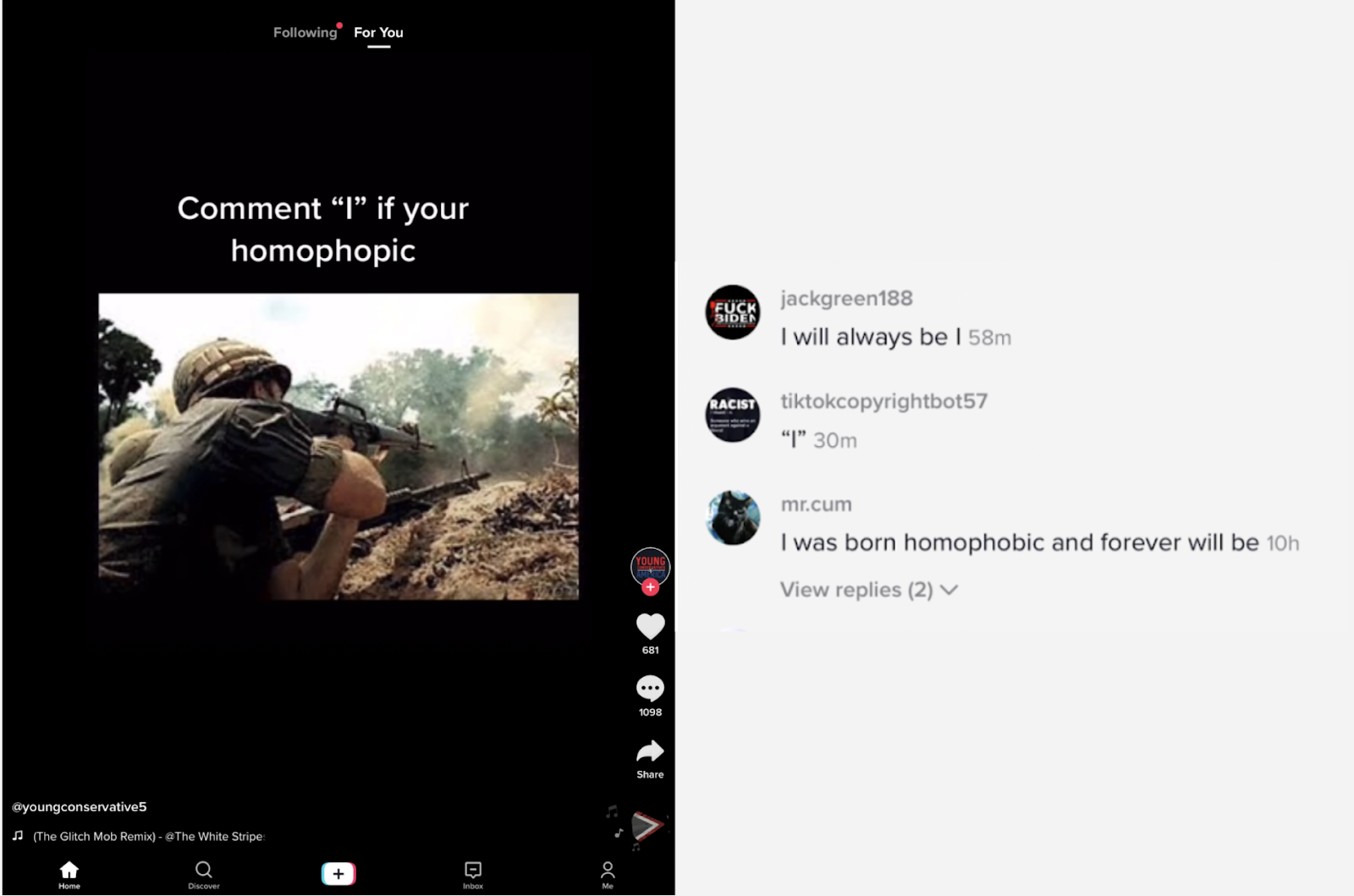 Videos encouraging users to burn the LGBTQ pride flag are circulating on TikTok, with tens of thousands of likes.

In one video, a man refuses to walk on steps painted with pride colors, with overlaid text reading “me and my followers.” Some of the comments on that video read, “This man is a legend,” “Sorry but I’d spray a black walkway up it for the people who fear god and are not sick in the head,” and “Respect 100.” The reality is that even though TikTok claims to prohibit discriminatory and hateful content, explicitly anti-LGBTQ videos are not only flourishing, but being fed directly to users’ “For You” pages by the company’s algorithm. This is not a harmless oversight; this content that has the potential to encourage anti-LGBTQ attacks, an increasing problem in recent years.