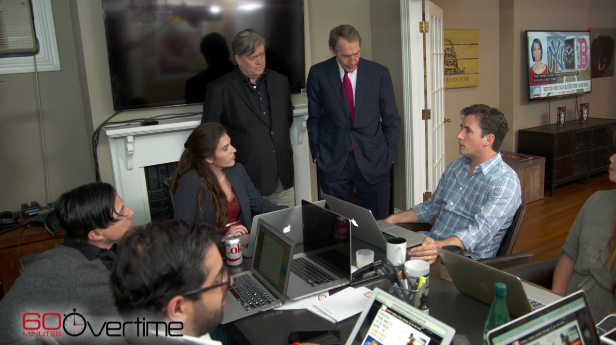 Former Trump adviser and once-again Breitbart.com chief Stephen Bannon sat down for an interview with CBS’ Charlie Rose this week, which aired on Sunday’s edition of 60 Minutes. Rose certainly had plenty of worthy topics to choose from in developing his questions for Bannon. There’s the far-right mastermind’s ongoing relationship with President Donald Trump, and his plans for the future of his cesspool website that openly appeals to the most hateful segments of the population. There’s also his shady involvement with the billionaire Mercer family and its groundbreaking and dangerous use of online data analytics during the 2016 election, which somehow didn’t make the cut. And there was one even more obvious question Rose ought to have asked outright during his sit-down with Bannon at the famed “Breitbart Embassy”: Is Breitbart even allowed to be there?

Breitbart has used a Capitol Hill town house, widely known as the “Breitbart Embassy,” as its headquarters since at least 2011. In various interviews and reported pieces over the years, the property has been referred to as “offices,” a “workspace,” Bannon’s “living quarters,” and Bannon’s personal home. And in last night’s 60 Minutes interview, Rose described the property as Bannon’s “home in Washington, which doubles as the headquarters of Breitbart News,” and showed footage of Bannon meeting with editorial staff at the dining room table. In fact, the circumstances under which Breitbart.com occupies the residence in Capitol Hill are far murkier than any of those labels suggests; a few months ago, the committee that controls congressional press credentials cited the site’s use of the house, which is not zoned for commercial activity, as part of the reason for denying it permanent credentials.

Contrary to some reporting, the residential property is not owned by Bannon; Breitbart News rents it from Egyptian businessman and former politician Moustafa El-Gindy. The terms of the lease are not publicly available, and El-Gindy has insisted he is nothing more than a landlord, though Breitbart.com has promoted him as an expert and quoted him in articles at least four separate times without disclosing the landlord relationship. While Bannon was working in the Trump White House, this lease arrangement was particularly questionable, as he had claimed to no longer be affiliated with Breitbart, yet it could have been paying his rent, or at least sharing its offices with his personal residential space.

Now absent that potential conflict of interest, the “Breitbart Embassy” is still saddled with at least a few more that haven’t gone away quite so easily. As USA Today’s Paul Singer reported in March, a local elected official familiar with zoning rules stated that Breitbart’s various uses for the town house “appear to violate” zoning regulations for the neighborhood. The house is zoned for residential use only -- and El-Gindy, in fact, was until recently receiving a deduction for the house that suggests it’s his residence -- but it’s clearly used as a commercial workspace.

At the time of Singer’s investigation, a Breibart spokesperson told the reporter -- and the Senate press committee -- that the site was “transitioning” out of the house and actively looking for a new workspace in downtown D.C. It’s now been more than five months, and Bannon is instead giving high-profile, on-camera interviews there.

So the question is: Does Bannon believe that he can freely and openly ignore the law now that he’s out of the White House?