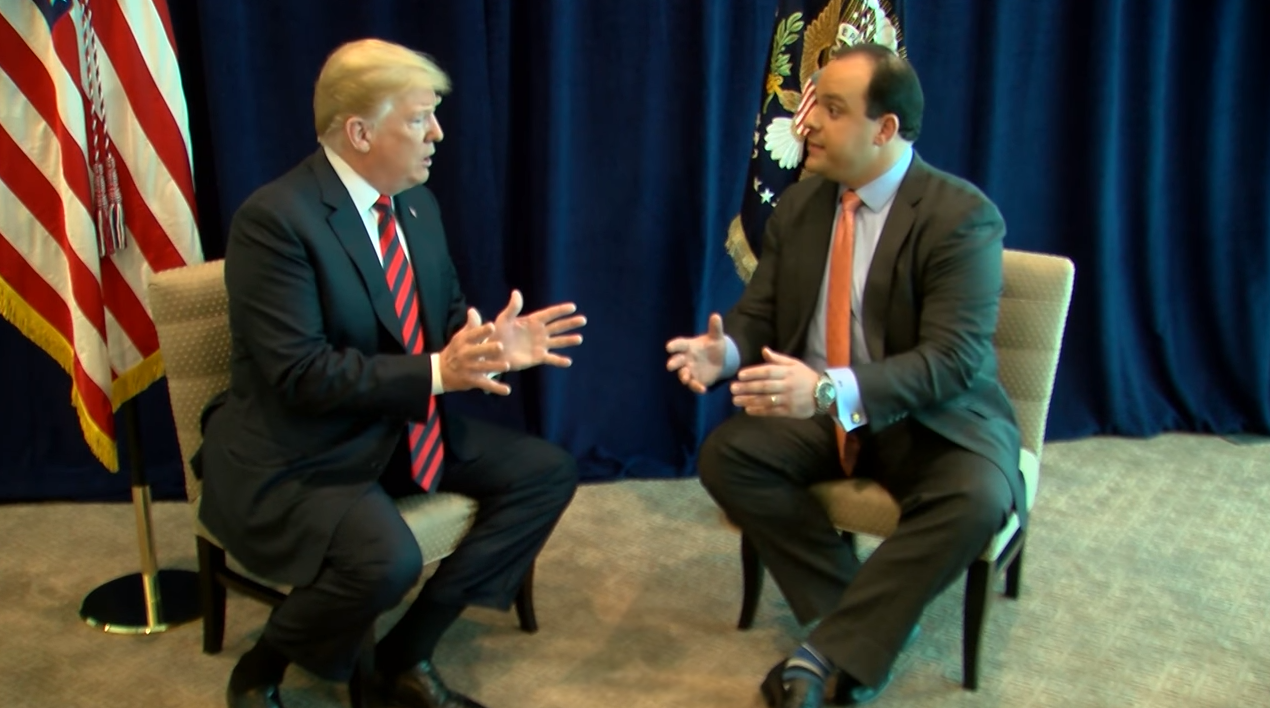 In perhaps the most egregious example yet of the pro-Trump alternate reality Sinclair Broadcast Group presents to its viewers, six “must-run” commentary segments the media company has created since September 21 have all been excerpts of a softball interview of President Donald Trump conducted by a former Trump aide.

The overwhelming themes of the segments boiled down to: The Trump administration is doing great things, and the left and the liberal media aren’t being fair to Trump. The interviewer, Boris Epshteyn -- a former Trump aide, apparent personal friend of Eric Trump and Donald Trump Jr., and Sinclair’s chief political analyst -- mostly nodded along or added details in an attempt to back up Trump’s bonkers statements.

The series of six consecutive “must-run” segments -- each of which has now aired on an estimated 100 local news stations across the country -- kicked off on September 21 with a segment focused on what Trump called Kavanaugh’s “unblemished record.” The interview was conducted that day, five days after Ford first shared the details of her account publicly in The Washington Post. In the interview, Trump briefly repeated vague White House talking points about making sure Ford is heard, before saying he believed Kavanaugh would ultimately be confirmed.

Segment 2: Trump rambles about how everyone says there was “no collusion,” and Epshteyn again just sort of nods

In the second interview segment, posted on September 24, Epshteyn asked one of just a handful of actual interview questions about Trump’s walk-back on declassifying documents related to the ongoing investigation into Russian collusion during the 2016 presidential election. Trump fumbled through his response, answering mostly by citing different Republican lawmakers who say there was “no collusion.” Epshteyn concluded that Trump is committed to transparency.

Segment 3: Trump says the current economy could be “the greatest we’ve ever had” and Epshteyn passively nods

The third segment, from September 25, began with Trump declaring that the current economy “could be the greatest we’ve ever had.” Epshteyn then asked him about renegotiating the NAFTA trade deal in the following extremely unbiased way (emphasis added):

EPSHTEYN: You mentioned NAFTA. Mexico has already agreed to renegotiate a deal -- something that most people said you couldn't get done. You got that done. Now it's up to Canada. Do you think that Canada, with Justin Trudeau as their leader, will capitulate and join the new deal?

Segment 4: Trump uses the Sinclair platform to tell viewers to vote for Republicans in the midterms

Epshteyn kicked off the fourth interview segment -- also focused on the economy -- with another very normal and not biased question for his former employer:

EPSHTEYN: Sir, it’s almost been two years. The economy is roaring. The stock market is way up. Unemployment, way down. GDP growth -- it's much better than anybody expected. What do you think can be done to make sure it's long-term sustainable economic growth?

The two men then continued to agree with each other about how great the economy is, before Trump told viewers that they ought to vote for Republicans in the midterm elections (emphasis added):

TRUMP: We have a great economy. This is possibly the greatest economy our country's ever had. That's why, when it comes to the midterms, I hope people are going to remember us because we need Republicans. And I'm not running, but I am in a way running because, you know, friends of mine and people that have our values and our thoughts, they're running. So, we need a lot of help for the midterms and I think we're going to do well, you know, based on the economy and based on the success.

Segment 5: Trump unintelligibly rants about his relationships with North Korea and Iran, while Epshteyn nods along

In the fifth segment, released on September 27, Trump incoherently discussed relations with North Korea, frequently interrupted by Epshteyn signaling his agreement with everything the president says even though it makes no sense. The one substantive thing Epshteyn said in the entire excerpt was to offer an additional point that backs up Trump’s claim that, with North Korea, “We’re doing a lot of speed. So it’s really coming along well.”

Segment 6: Trump says he is “treated less fairly than anybody who's probably ever lived” by the media, Epshteyn agrees

Epshteyn finished off the series of interview must-runs on September 28 with an excerpt that sounded like it was ripped straight from a Trump rally: an almost entirely uninterrupted rant from Trump about how he is “treated less fairly than anybody who’s probably ever lived” by the overwhelming “fake news media.”

Just watch this, then imagine flipping channels as you make dinner and landing on your local news and this is what’s playing.

EPSHTEYN: President Trump feels that he is not treated fairly by most of the media. He spoke about that extensively during our exclusive one-on-one interview.

TRUMP: I am treated less fairly than anybody who's probably ever lived. I almost ask why, you know, what’s the point. We have the best economy we’ve ever had. So many things are going well. You know, the media is really dishonest and reports came out -- even when I do really good stuff, they make it look as bad as possible. And when I do stuff that’s OK, it’s like a disaster.

TRUMP: OK? But when I do things that are really phenomenal, like, as an example, North Korea. We’re doing a phenomenal job in North Korea. We were going to go to war. Before I got in, we would have had a war. We didn’t give anything. We got our hostages back. We got so many different things.

TRUMP: We got the remains. No more missile testing. No more rocket testing. No more nuclear testing. And I met. And they said, “He met, he met. Therefore he lost.” Because I met. In other words, they couldn’t get anything substantive so they said, “Ah, the fact that” -- now I will say, when it was announced that I was going to meet, until they got their, you know, little dialogue straightened out, they thought it was incredible. But you know, about, within 24 hours --

TRUMP: they said we -- you know, the media’s unbelievably dishonest. And I actually say that the fake news media is truly an enemy of the people. It hurts our country tremendously.

EPSHTEYN: But the people see through it. Don’t you think?

EPSHTEYN: Here’s the bottom line: Let’s hope that the press can start concentrating on facts and issues that matter to the American people, and not gossip and innuendo.

So to recap, Epshteyn secured an interview with a leader of the free world, with excerpts airing on local news stations all over the country. With this opportunity, here is a list of every question or statement Epshteyn uttered throughout the six interview excerpts. They are presented in chronological order:

The good news: Virtually no one seems to be seeking out these segments on purpose. By all accounts, a new one-on-one interview with direct, potentially newsworthy quotes from the president of the United States is a huge get. And yet, as of publication, each of these interview segments has been watched less than 200 times on Ephsteyn's YouTube channel. Five of the six segments -- all but the segment that Media Matters already wrote about -- have gleaned less than 50 views. (This is embarrassingly typical of Epshteyn’s audience numbers.)

The bad news: Epshteyn’s lack of an eager audience hasn’t stopped numerous other conservative leaders from giving him “interviews” to exploit his platform, thus beaming their messages to millions of unwitting local news viewers just in time for the midterm elections.