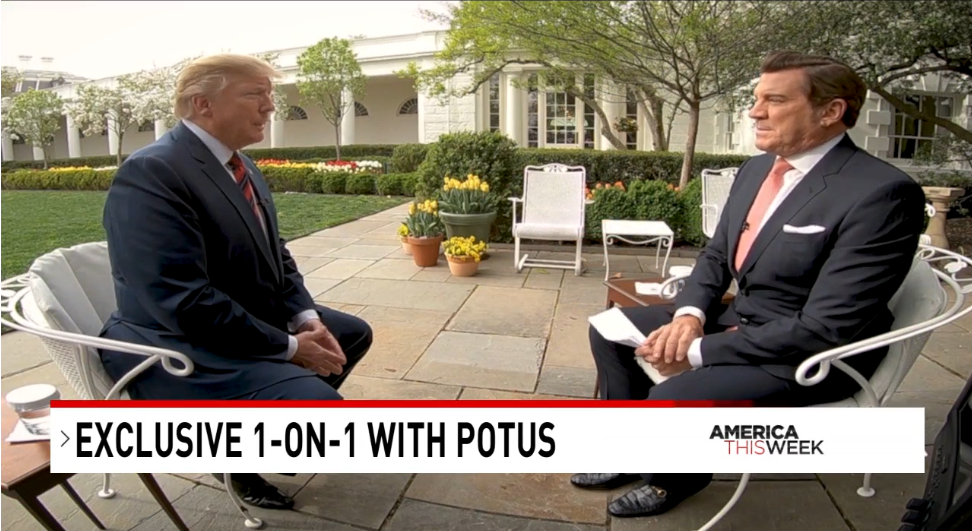 This week, President Donald Trump continued his practice of rewarding conservative media outlets he believes are not biased against him, sitting down for an exclusive interview in the Rose Garden with Eric Bolling, a political anchor at the right-wing Sinclair Broadcast Group.

Bolling interviewed Trump for the third episode of his new show for Sinclair, America This Week, which streams on Sinclair station websites weekly and is promoted and occasionally aired on the stations themselves.

In one promotional clip, Trump and Bolling discussed the president’s belief that the press is biased against him because of “Trump derangement syndrome.” Trump also said that the term “fake news” is no longer strong enough to convey mainstream media’s supposed bias against him. This clip aired on at least 49 stations in 28 states and the District of Columbia on April 16 and 17, according to the iQ media database.

In another clip, the president misleadingly told Bolling (and viewers), “We’re building a lot of wall right now. We’re taking old stuff down that didn’t work, and we’re using -- we’re building beautiful 30-foot barriers and bollards and, in some cases, concrete, depending on what we need. And a lot of wall is being built.” This clip aired on at least 40 stations in 22 states from April 12 through April 15.

The full 15-minute interview was posted online on April 17, and it was about what you might expect from a former Fox News host who previously said he would work for Trump for $1. Bolling introduced the interview like this:

I found the president relaxed and confident, just off the Mueller and Barr report release. The busiest and most powerful man on the planet gave me 15 minutes on tape and another 30 minutes walking around the beautiful Rose Garden setting.

And the interview itself began (after a minute-long monologue from Bolling about Media Matters) with the men stating that they respect each other. Many of Bolling’s questions for the president were more like supportive comments about Trump’s agenda or softball setups for Trump to bash Democrats or the media. Here are a few:

This sit-down with Bolling is Trump’s ninth on-camera interview of the year. In February, he was interviewed by CBS’ Margaret Brennan, and earlier this month he spoke with KSTP in St. Paul, MN; the other six interviews were with Fox News or Fox Business personalities. He has also sat down for multiple interviews with Sinclair personalities in the past, including for a series of “must-run” segments with Sinclair chief political commentator and former Trump aide Boris Epshteyn last year.

Bolling previously worked at the president’s favorite network, Fox News, where he pushed the network’s signature misogyny, race-baiting, and anti-Muslim rhetoric, as well as the racist birther conspiracy theory championed by Trump. He left Fox in 2017 amid reports that he sent multiple colleagues unsolicited images of genitalia.