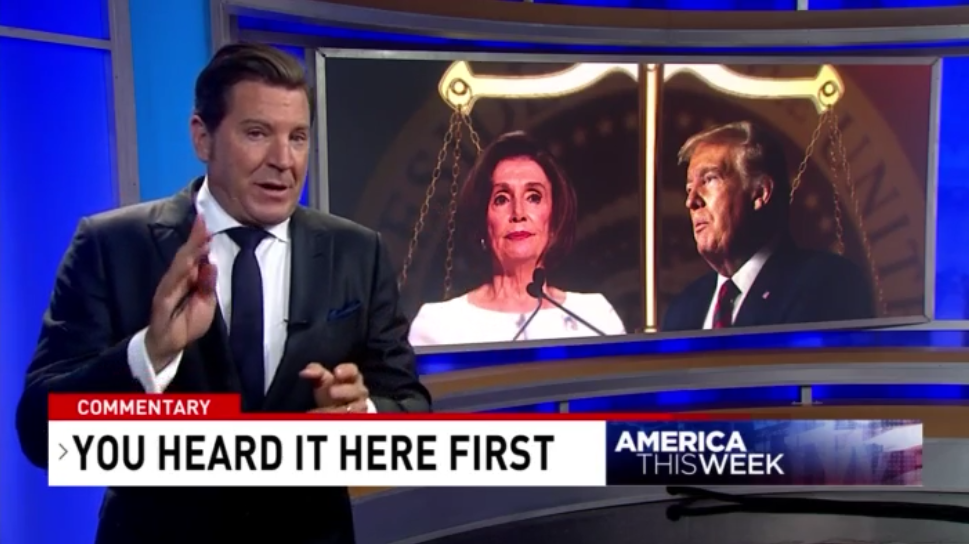 In the midst of the constantly evolving news around a formal impeachment inquiry of President Donald Trump, two Trump loyalists at Sinclair Broadcast Group are using public airwaves to push nonsensical defenses of the president.

A wave of reporting, leaks, and public document releases in the last week has led Democratic leadership in the House to launch a formal impeachment inquiry into the president. The inquiry comes in response to a whistleblower complaint from an individual in the national intelligence community detailing evidence that Trump used the office of the presidency to pressure a foreign government to investigate his potential 2020 political rival Joe Biden and his son. The complaint further detailed that senior members of the administration may have purposely attempted to bury this evidence, taking actions that were potentially part of a larger pattern of cover-ups within the administration.

The pro-Trump propaganda machine at Fox News has been working overtime to defend the president and the July 25 phone call with Ukrainian President Volodymyr Zelensky that’s at the center of the complaint at every turn. After all, it’s why the network exists.

And now the Trump loyalists at Sinclair are weighing in with programming that rivals Fox’s state TV-style propaganda -- by cramming all of the above into their latest programming.

In a September 25 “must-run” commentary segment, chief political commentator Boris Epshteyn argued that Democrats had rushed to judgment on the inquiry based on “weak” reasoning. Epshteyn also said the Zelensky call was “straightforward and appropriate” and he attempted to frame the news as worse for Biden than Trump.

Epshteyn’s schtick at Sinclair is more or less to produce near-daily segments that cheerlead or defend the president’s every move. He worked on Trump’s campaign in 2016 and may have signed a nondisparagement agreement during that time that prevents him from publicly criticizing Trump. (His September 26 segment, for example, was back to business as usual -- praising Trump's United Nations General Assembly address and saying “we should be celebrating the president's accomplishments” right now “in the midst of a biased media and frivolous impeachment inquiry.”)

His segments air on Sinclair-controlled local news stations across the country, and they are typically paired with a second segment on the same topic from liberal commentator Ameshia Cross. In this case, Cross’ segment supported the inquiry as a potential way “to put an end to Trump’s misuse of presidential power.”

Bolling opened with a monologue that hit on pretty much all the pro-Trump talking points: suggesting Democrats and the media are acting out of bias against the president, minimizing the likelihood of impeachment proceedings, and defending the Zelensky call as appropriate. “Asking Ukraine to crack down on corrupt U.S. politicians is not a high crime, nor a misdemeanor, nor treason,” he said. “It’s good vigilance by a seated U.S. president.” He concluded by bizarrely comparing the impeachment inquiry to the 1995 murder trial of O.J. Simpson, saying, “In the immortal words of Johnnie Cochran: ‘If it doesn’t fit, you must acquit.’ And in this case, the criminal glove just doesn’t fit the presidential hand.”

Next, Bolling interviewed Roger Stone about the impeachment story. Stone is a former Trump confidant and longtime GOP political operative with a prominent back tattoo of disgraced President Richard Nixon, who famously resigned rather than face articles of impeachment from Congress. Stone is currently under a strict gag order related to an ongoing legal case brought against him by former special counsel Robert Mueller’s office, with charges alleging obstruction, false statements, and witness tampering.

Together, Stone and Bolling went through a laundry list of Trump defenses: dismissing the whistleblower complaint as “secondhand” allegations, insisting the call memo released by the White House showed “no quid pro quo” (and therefore no wrongdoing), arguing Democrats “jumped the gun” on launching the inquiry and that it will “backfire very badly” on them in the end, suggesting the real story was about Biden, and insisting the impeachment inquiry will actually be “a good thing” for Trump.

Bolling then interviewed former Trump operative Steve Bannon, who criticized the administration’s messaging strategy around the whistleblower complaint but ultimately argued that Trump did nothing wrong.

Later in the program, Bolling interviewed Marc Lotter, the director of strategic communications for the Trump reelection campaign. The majority of the interview was focused on the two men trading arguments back and forth for why impeachment will be good for Trump, and the segment ended with Lotter explaining why several of Trump’s potential 2020 campaign rivals are bad.

Bolling also hosted a chaotic panel discussion of the impeachment story, featuring two Trump supporters and two critics. Though Bolling was framed as a moderator of the discussion, he and the other two Trump loyalists on the panel -- former Trump aide Sebastian Gorka and former Rep. Scott Taylor (R-VA) -- repeatedly shouted down the two liberal guests -- strategist Joel Payne and commentator Ameshia Cross -- whenever they raised facts to combat the pro-Trump spin on the panel. Gorka called the whistleblower a “hearsay blower” and Bolling defended the call memo as typical for a Trump conversation, declaring, “I see zero quid pro quo in this document.”

By the end of the segment, a visibly frustrated Payne contended that viewers would be able to see through his fellow panelists’ spin and concluded that he and Cross must be living in “different worlds” than Bolling and the rest of the show’s guests.

Bolling’s show began streaming on Sinclair station websites on September 25 and will air on at least some news stations this weekend.