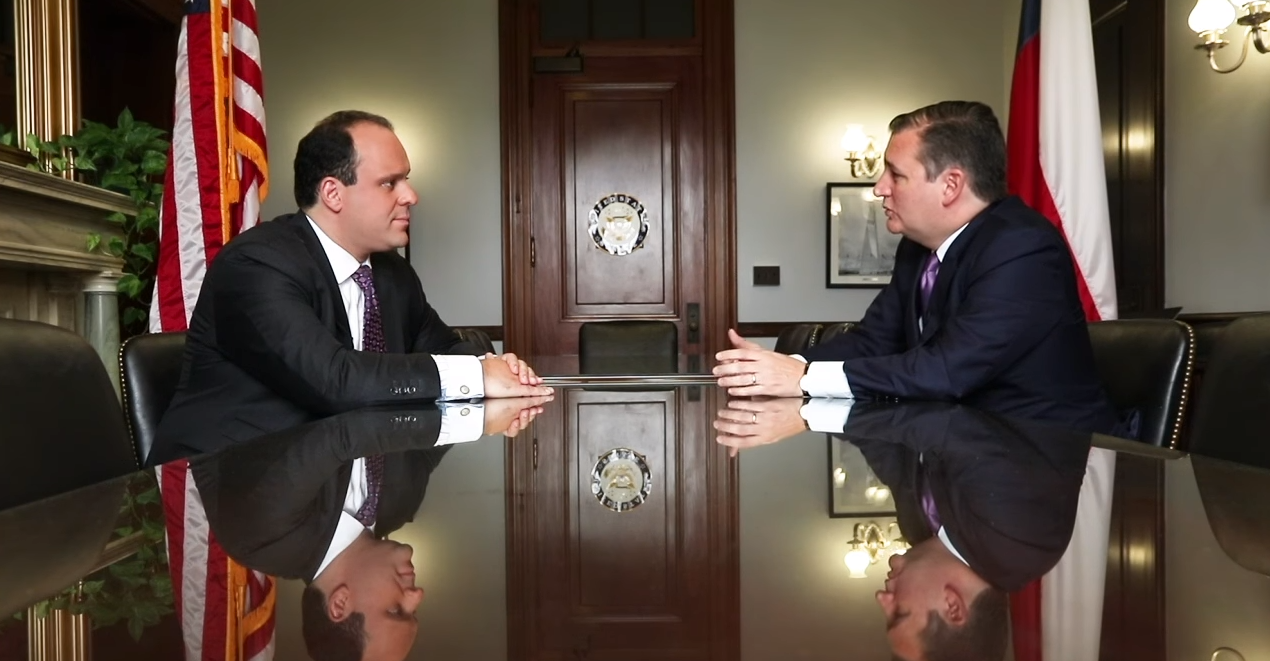 Sinclair Broadcast Group is showcasing its potential infuence on key midterms races this fall by forcing its local stations to air multiple excerpts of a softball interview with Sen. Ted Cruz (R-TX). So far, Sinclair chief political analyst Boris Epshteyn has produced three “must-run” segments from his interview with Cruz, who is up for re-election, and they’ve aired in at least five metropolitan areas across Texas and in at least 26 other states just weeks before voters head to the polls.

The first “must-run” segment featuring part of the Cruz interview began airing on Sinclair local news stations on October 12. The roughly two-minute segment, like some of Epshteyn’s other criminally soft interviews with GOP officials, features no questions from Epshteyn. The chief political analyst simply added a separately recorded intro and ending to the interview footage and let Cruz ramble for a minute straight in the middle. What’s worse is the topic Cruz ranted about: an “angry mob that we’re seeing on the left” that makes it hard for him to eat at restaurants.

Epshteyn concluded, “Shame on those who choose to harass our public officials.” Neither mentioned the reason why Cruz and his wife, Heidi, were met by protesters when they attempted to dine at a D.C. restaurant: his support for Supreme Court Justice Brett Kavanaugh’s confirmation in spite of multiple credible reports that Kavanaugh had sexually assaulted women in high school and college (and lied under oath about it.)

The second “must-run” segment, which began airing on October 16, was more akin to an ad for Cruz’s policy priorities. It featured a brief discussion of a bill Cruz introduced in the Senate in late September that would fund the placement of armed police officers in schools. Epshteyn did not mention the harm that having an armed police presence could inflict on students. He ended the segment, instead, with some his signature “political analysis”: “I truly hope that these efforts by Senator Cruz and his colleagues in Congress are successful.”

A third “must-run” interview clip began airing on October 19. It was another infomercial for Republican Party policies, this time touting last year’s tax reforms. Cruz stated that he hoped to work with others in Congress to make individual tax cuts from the bill permanent, a move that Reuters says is “widely seen as a partisan ploy to help Republican candidates in the Nov. 6 congressional elections.” Epshteyn ended the segment, “The tax reforms put in place late last year were an achievement generations in the making.”

According to the iQ media database, Sinclair stations in 27 states have broadcast one or both of these segments. Most notably, stations in at least five local media markets in Cruz's home state of Texas have aired at least one of them -- KEYE in Austin; KTXS broadcasting in the Abilene and Sweetwater area; KBTV serving the Beaumont and Port Arthur region; KGBT broadcasting around Harlingen, Weslaco, Brownsville, and McAllen; and KABB in San Antonio -- just weeks away from Election Day.

Sinclair's recent attempt to expand into more major media markets by acquiring Tribune stations may have fallen through, but the company is still poised to impact key midterms races with news programming like this. A number of Sinclair’s 192 local TV stations -- many of which broadcast Sinclair's original news programming -- are located in battleground states for the 2018 and 2020 election cycles; for example, Sinclair controls seven stations broadcasting in Pennsylvania, eight in Michigan, and 13 in Florida. Stations like these are positioned to directly impact races, in part because they enjoy higher levels of trust than other news sources, and Sinclair has repeatedly demonstrated it’s more than willing to exploit that trust.

The company also appears to be increasing the frequency with which it replaces its “must-run” “Bottom Line with Boris” commentary segments with friendly interviews with GOP officials, including some running for re-election this fall.

This year, Epshteyn has aired interviews with eight other Republican congressmen, nine members of President Donald Trump’s administration including the president himself, and a Trump lawyer. The appearances include:

Cruz, DeSantis, McCarthy, Rooney, and Duffy are all on ballots this year.