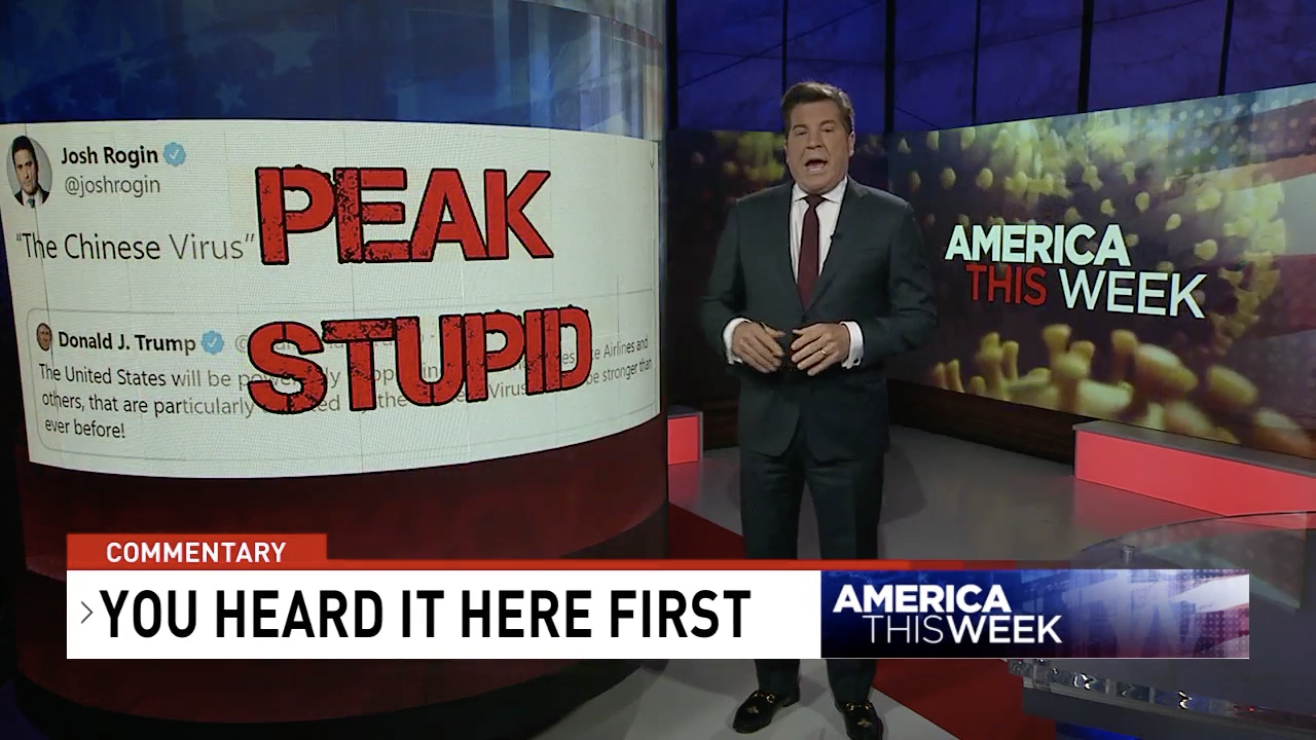 A dangerous combination of coronavirus misinformation and politically biased coverage has found its way to local TV news — thanks in part to Sinclair Broadcast Group’s America This Week and its host, Eric Bolling.

In an effort to defend the Trump administration’s failure to effectively respond to the pandemic, right-wing media have attacked legitimate news outlets, launched racist campaigns to rebrand the virus, and promoted conspiracy theories and unproven coronavirus treatments. Bolling’s America This Week is no different, and he’s been presenting Sinclair viewers across the country with a distorted view of the current public health crisis.

Bolling was previously a host on Fox News, where he regularly pushed conspiracy theories, misogyny, and race-baiting commentary; he was a central figure in promoting the racist birther conspiracy theory about former President Barack Obama. He left the network in 2017 amid reports that he sent unsolicited images of genitalia to multiple colleagues.

Bolling began hosting his own weekly show for Sinclair in April 2019. America This Week airs on dozens of Sinclair-owned or -operated local news stations on weekends, and streams on Sinclair station websites.

In addition to his national media platform, Bolling has considerable access to the White House as a friend of President Donald Trump. Bolling personally pitched the president his coronavirus economic relief plan, and he has hosted several Trump administration officials to help spread the administration’s messaging on the coronavirus.

As the potential impact of COVID-19 became clear in early March, right-wing media figures including Fox News host Sean Hannity argued that Democrats and the media were stoking fears about the virus in an effort to damage Trump. During his Sinclair show on March 11, Bolling also repeatedly suggested that media outlets were exaggerating the potential dangers of coronavirus.

Many in right-wing media have referred to COVID-19 as the “Wuhan” or “Chinese” virus in an effort to associate the disease with its country of origin and blame China for the crisis. By doing so, right-wing media figures like Bolling reject the advice of health experts and potentially contribute to the dangerous stigmatization of people of Asian descent.

Sinclair has also provided a platform for Bolling and his guests to air right-wing conspiracy theories about COVID-19. Bolling has been particularly focused on the unproven theory that coronavirus was accidentally released from a Chinese lab, and has even gone so far as to suggest that the Chinese scientists genetically engineered the virus to be more deadly. The theory that COVID-19 was originally created as a bioweapon and was not naturally transmitted from animal to human has received considerable attention in right-wing media.

Conservative media figures have suggested that the number of U.S. deaths from the coronavirus is inflated, when in reality the current death toll is likely an undercount. Bolling has also hinted at this baseless right-wing claim on his Sinclair program.

Fox prime-time hosts such as Hannity and Laura Ingraham have relentlessly promoted the antimalarial drug hydroxychloroquine to treat COVID-19, despite a lack of evidence that the drug is effective. On his Sinclair show, both Bolling and his guest White House adviser Peter Navarro have talked about the drug in ways that minimize potential dangers and oversell the drug’s proven effectiveness.

Since March 11, guests on Bolling’s show with clear partisan affiliations have been overwhelmingly Republicans, adding to the one-sided perspective on the public health crisis already offered by Bolling.