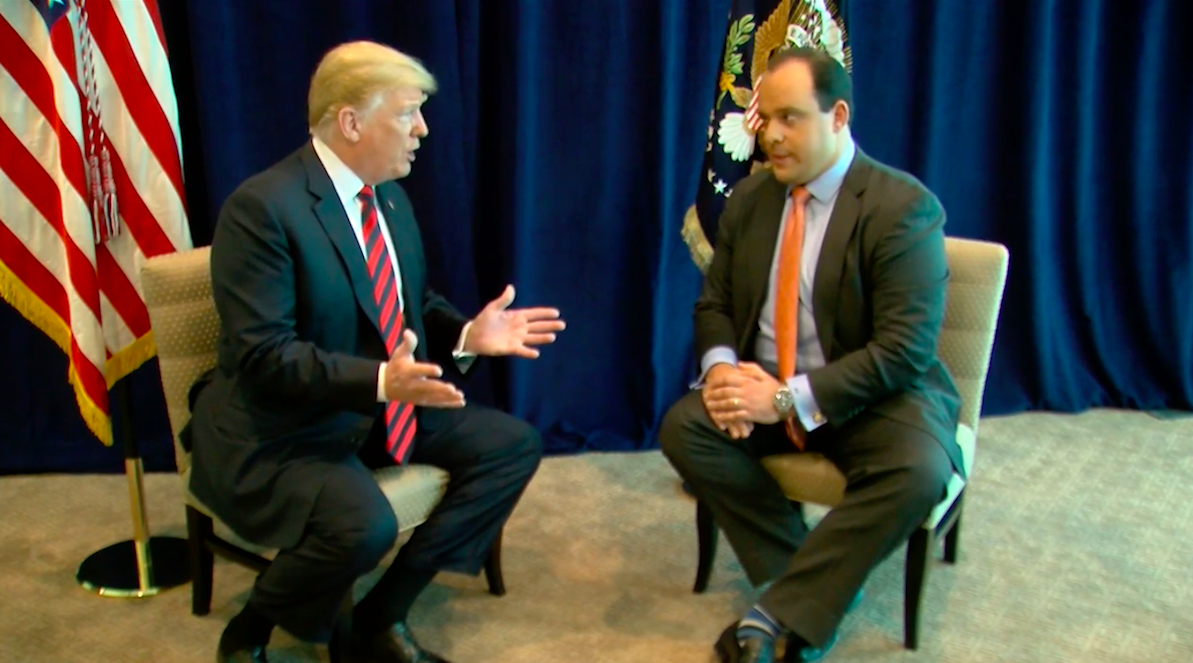 Sinclair Broadcast Group, the largest owner and operator of local TV stations in the country, regularly broadcasts pro-Trump propaganda segments created by an ex-Trump staffer into the homes of millions of Americans. And now those segments include an interview with President Donald Trump himself, in which he was given a friendly platform to discuss his continued support of Supreme Court nominee Brett Kavanaugh despite a report that he committed sexual assault.

The media company’s chief political analyst, Boris Epshteyn, has been producing regular commentary segments, called “Bottom Line With Boris,” for Sinclair for more than a year. Epshteyn had previously worked in the Trump White House on the communications team, after doing stints on the Trump inaugural committee and on the Trump campaign. Epshteyn also served as a Trump media surrogate throughout the campaign and first days of the Trump presidency. Epshteyn is personal friends with the president’s sons Eric and Donald Jr., and he has been spotted at Trump International Hotel multiple times, including with Don Jr. in June. He also may or may not have signed a nondisparagement agreement while he was working on the campaign, which could legally prevent him from criticizing Trump.

For a chief political analyst, Epshteyn offers takes that are notably unoriginal. At best, he regurgitates Trump talking points or touts some vague, imaginary bipartisan ideals that involve being nicer to Trump. At worst, he defends the most upsetting, racist things Trump does. In fact, in a recent interview on a National Review podcast, Epshteyn could not think of a single issue about which he had disagreed with the Trump administration in any of his commentary segments. What’s more: These segments ultimately air on an estimated 100 TV news stations under Sinclair’s control, exploiting the trust people have in their local news.

Given the president’s penchant for granting interviews to sycophants, it was only a matter of time before Trump himself made an appearance on “Bottom Line with Boris.”

On September 21, Epshteyn shared the first of what will likely be several must-run segments featuring excerpts from his sit-down with the president. This one is focused on Kavanaugh’s nomination to the Supreme Court and professor Christine Blasey Ford’s account of sexual assault by Kavanaugh when they were both in high school. In the segment, Trump largely repeats broad White House talking points about making sure Ford is heard, and then pivots to touting Kavanaugh’s “unblemished record.” Trump also says he believes Kavanaugh will ultimately still be confirmed.

BORIS EPSHTEYN: The nomination of Judge Brett Kavanaugh to the Supreme Court is facing last-minute turmoil over allegations that he committed sexual assault decades ago. I spoke with President Trump about this in a one-on-one, exclusive interview. Here’s what he shared.

PRESIDENT DONALD TRUMP: Well, I think they’ve been very respectful of Dr. Ford, extremely respectful. I think they’re doing the right thing. They want to give her a voice, if she wants to take it. They’re talking now about timing. It’s already been delayed a week. That’s a long time. This is the U.S. Senate we’re talking about.

TRUMP: I can only say this: Let her speak. But Brett Kavanaugh is one of the finest people you’ll ever meet. I think it’s been extremely hard on him and his family. When I look at what’s happening -- here’s a man with an unblemished record, and to be going through this all of a sudden. So I won’t say anything now. All I’m saying is that -- let it play out. Let her have open voice. And let’s see what happens.

EPSHTEYN: Do you think he will get confirmed in the end?

TRUMP: I do. I do. One of the finest judges we have, one of the greatest intellects we have. Top of the line in every way. This is a shame. This is actually a shame.

EPSHTEYN: Here’s the bottom line: President Trump continues to support Judge Kavanaugh and is confident that he will be confirmed.