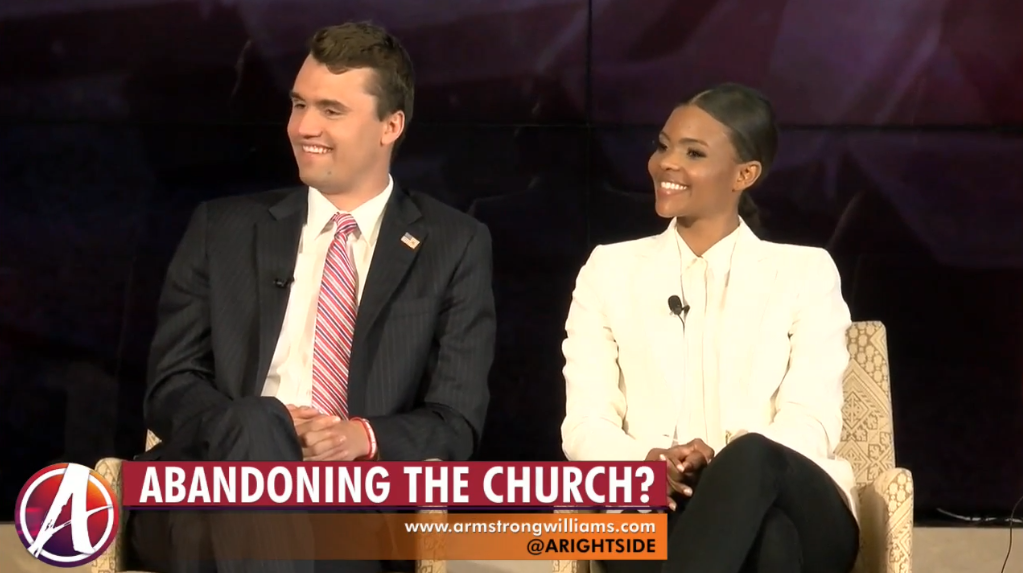 The town hall was branded as both an episode of Sinclair-linked commentator Armstrong Williams’ show and a part of Sinclair’s ongoing town hall discussion series. The town hall does not appear to have yet aired on WJLA and it’s not clear if it has aired or will air on the WJLA-operated local Washington, D.C., cable channel News Channel 8, but it’s posted in full on WJLA’s website.

Sinclair touts its “Your Voice, Your Future” local town halls as a public service and an opportunity to “alert, inform, empower and engage our audience.” Here’s a quick clip to give you an idea of how that went:

Though the panel was titled “Youth & Morality,” it was advertised as largely focusing on one study that showed dwindling millennial identification with Christianity, which WJLA characterized as a sign of “unprecedented moral decline.” The panel discussion was filmed at the Museum of the Bible.

Two minutes into the town hall, host Armstrong Williams asked the audience to raise their hands if they believe in God. (Williams also asked for audience members to raise their hands if they were atheist; one person did and panelists grimaced.) Williams’ first question for the panelists followed from there: “Can you be moral and good and not believe in God?” (Most of the panelists agreed that it was possible but not as easy.) Within eight minutes, panelists were equating “objective truth” with a belief in a Christian god and arguing that the inability to identify objective truths was “cultural Marxist.”

At one point during a commercial break, Williams can be heard joking on a live mic, “Don’t fall asleep on me!” The panel returned from that break to listen to Charlie Kirk talk about “the distinction between Christianity and other religions.”

The town hall was hosted by conservative pundit Armstrong Williams, who has significant ties to Sinclair. Williams hosts a weekly show that airs on the Sinclair-owned News Channel 8 in the D.C. area and is syndicated on other Sinclair local TV stations across the country. Williams also owns several local TV stations through his holding company, Howard Stirk Holdings, which in turn sends business back to Sinclair through operations agreements.

Williams is a close confidante of Secretary of Housing and Urban Development (HUD) Ben Carson, even doing public relations work on behalf of Carson while continuing to also work as a media figure. (He also served as a Carson presidential campaign adviser while maintaining his weekly hosting duties.) Recently, Williams has aligned himself with other members of the Trump administration, joining Sinclair CEO David Smith in meeting with Federal Communications Commission Chairman Ajit Pai -- who was then a commissioner -- to advocate for pro-industry policies the day before Trump’s inauguration. About two months later, Williams hosted Pai on his show for a friendly interview.

Back in 2005, Williams used an earlier version of his syndicated show to promote Bush administration education policies, failing to note he was paid $240,000 by the administration to do so. The Government Accountability Office subsequently found that the Bush Department of Education had violated federal laws about covert government propaganda by paying Williams for the promotion.

Williams has also settled at least two sexual harassment suits -- one in 1997 involving reports that he “repeatedly kissed and fondled” a former producer for his now-defunct radio show over the course of nearly two years, and another in 2017 alleging that he groped and sought sexual favors from a former employee and later retaliated against the man.

During the panel, Williams talked about his daily prayer routine and decision not to “use profane language” at work because he is the “moral leader” in his office.

The panel featured eight participants in addition to Williams, the majority of whom were young conservative media figures who fall at various points on the spectrum from extreme or blatantly racist to embarrassing or just boring.

TPUSA’s Charlie Kirk and Candace Owens both participated in parts of the town hall. Frequent Fox News guest and conservative “boy wonder” Kirk is the founder of TPUSA, a group best known for a misguided 2017 protest in which its members wore adult diapers to “trigger the libs,” but whose stated mission is to “identify, educate, train, and organize students to promote the principles of freedom, free markets, and limited government.” Kirk, Owens, and TPUSA frequently fearmonger about suppression of conservative speech on college campuses while themselves leading a McCarthyist doxxing effort against liberal professors. Meanwhile, TPUSA has defended at least one professor with ties to a white nationalist group and several of its leading members have been outed for expressing patently racist sentiments, e.g. the group’s former national field director making the statement “I HATE BLACK PEOPLE.”

Owens, TPUSA’s communications director, is another Fox News regular and “a far-right vlogger and conspiracy theorist” who has lately garnered media attention after rapper Kanye West praised “the way Candace Owens thinks.” Owens gained attention from far-right MAGA trolls after she posted a video in the wake of the deadly Charlottesville, VA, “Unite the Right” rally in which she dismissed white supremacy as a narrative pushed by the media, leading to her appearance on conspiracy theory outlet Infowars. Owens has also called for all DREAMers to be deported and has argued that immigrants directly harm the black community.

During the town hall discussion, Owens lamented that conservatives were allowing themselves to be “silenced by liberal outrage” and said that younger conservatives and Christians ought to “punch back.”

The Daily Caller’s Amber Athey also participated in the discussion. The Daily Caller is Tucker Carlson’s sexist and racist brainchild, which frequently dabbles in anti-Semitism, anti-trans rhetoric, far-right conspiracy theories, and celebrity bikini photo slideshows, and makes light of sexual assault. Athey herself has tweeted anti-Semitic jokes, and repeatedly used the slurs “fag” and ”faggot,” and, in one case, “nigga$.” (Athey has since deleted the tweets, but they are available via archive.is.)

During the town hall discussion, Athey complained, “There are a lot of ideas on college campuses that -- if they’re conservative or they’re religious, they’re considered taboo and you’re not allowed to say it. Otherwise you’re considered a bigot.”

Town hall participant Antonia Okafor describes herself as “one of the country’s foremost advocates of concealed carry on campus” and has previously appeared in NRA media. Okafor makes regular media appearances pushing NRA-backed myths about campus carry, arguing that carrying concealed firearms would make young black women safer. In reality, the presence of firearms in domestic violence situations, for example, puts women’s lives -- and especially black women’s lives -- at significantly greater risk. And household gun ownership in general only increases the risk of death due to homicide, suicide, or accident; Okafor’s agenda would put women in greater danger.

Sinclair has used its “Your Voice, Your Future” town halls -- also the platform former Trump adviser Sebastian Gorka used to decry “black African gun crime” last fall -- to argue that Sinclair-owned and -operated local TV stations are providing greater services to the public. In one Federal Communications Commission (FCC) filing, Sinclair pointed to the discussion series as evidence that its planned acquisition of Tribune Media would create a “significant public interest benefit.”

The FCC is currently reviewing the Sinclair-Tribune deal specifically to ensure it would benefit the public and has signaled it will make a decision following a comment period that ends on July 12.