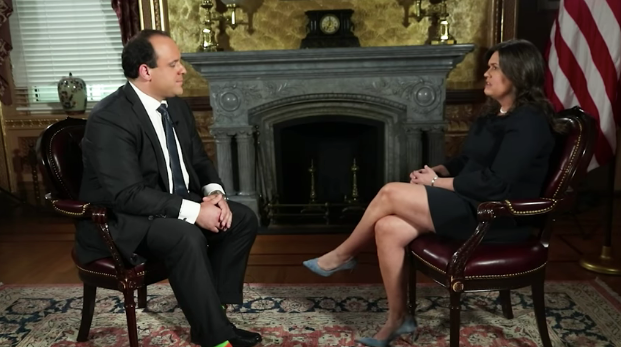 In a two-part interview conducted on June 20 and released on June 21 and June 25, Sanders joined Sinclair chief political analyst and former Trump aide Boris Epshteyn to talk about the ways so-called liberal media outlets are biased against her and the president and to discuss President Donald Trump’s recent summit with North Korean dictator Kim Jong Un. These parts of Epshteyn’s interview are now airing as “must-run” segments on more than 100 Sinclair-owned and -operated local TV news stations across the country, sandwiched between sports and the weather.

In the latest “Bottom Line With Boris” segment, Sanders and Epshteyn discuss the “disrespectful and despicable” ways that “many in the media” treat Sanders. According to a Media Matters search of the iQ media database this morning, this segment has already aired on local news stations in at least 21 states.

The entire astonishing two-minute spot is worth watching, if only to understand the propaganda that will now be broadcast into living rooms across the country. Below is a full transcript and video.

BORIS EPSHTEYN: The way many in the media treat White House press secretary Sarah Sanders is disrespectful and despicable. Here is what she told me about her relationship with the press.

EPSHTEYN: What would you say the reason is for some of the overarching and really over-the-line heat that you have faced from some folks, sometimes very personal. What is the root, you think, of some of the treatment you’ve received?

SARAH HUCKABEE SANDERS: I think some people, Democrats in particular, at some point they’re going to have to decide if they love our country more than they hate this president. And I hope that they’ll make the right decision in that process. But there’s certainly a lot of anger and a lot of hostility, and I think in large part it’s because they’ve got somebody like President Trump, who always beats them at their own game. He always overcomes the things that they say are not possible. They said he’d never run for president. He did. They said he’d never win. He did. They said he couldn’t get tax cuts done. He did. They said that the economy would completely crash. It’s the best it’s been since World War II. I mean, every single time that they try to tell him he can’t do something or that really bad things are going to happen, he proves them wrong, and I don’t think that they like that a lot.

EPSHTEYN: What is something that people at home may not know about you, that they’re not seeing when you’re sparring with the media or representing the president?

SANDERS: That maybe that I’m a little nicer than sometimes --

EPSHTEYN: Here is the bottom line: Sarah is a good person, a mother of three, and a public servant. I hope that all members of the press start treating her with the respect that she deserves.

The June 21 segment of the interview focused on all the ways Sanders and Epshteyn believe the North Korea summit was successful; it has now aired on stations in at least 22 states. Here is a partial transcript of what local news audiences heard about the meeting:

SARAH HUCKABEE SANDERS: And the president is a true leader on the global stage. And it was really magnificent to watch.

BORIS EPSHTEYN: Do you think that North Korea will end up denuclearizing?

SANDERS: As the president likes to say, we'll see what happens, but it was definitely a step in the right direction and we’re continuing to work towards denuclearization. We're going to keep pushing.

EPSHTEYN: Last questions on this topic. What about the criticism -- the president has been criticized by some folks, expectedly -- for being “too nice” to Kim Jong Un. What do you say to that?

SANDERS: I think those are people that are more worried about attacking this president than looking for the good that is happening both within our country and across the world.

EPSHTEYN: Here is the bottom line: As you just heard from one of the few Americans who have met with Kim Jong Un face to face, the summit was a success.

And the friendly relationship between the Trump administration and Sinclair may be mutually beneficial. Thanks to the Trump Federal Communications Commission, segments like these could soon air on even more local TV news stations -- including in major cities and battleground states across the country -- ahead of the midterms, reaching 72 percent of U.S. television households.