Right-wing media trolls Mike Cernovich and Chuck Johnson promoted a forged document that accused Senate Minority Leader Chuck Schumer (D-NY) of sexually harassing a former staffer, then quickly walked back their claims when the document was reported to police as a forgery.

In a now-deleted tweet, far-right Twitter troll Mike Cernovich promoted claims by  Chuck C. Johnson, who has a history of harassing journalists, saying he was “currently reading the sexual harassment settlement documents of a major Democratic US Senator.” 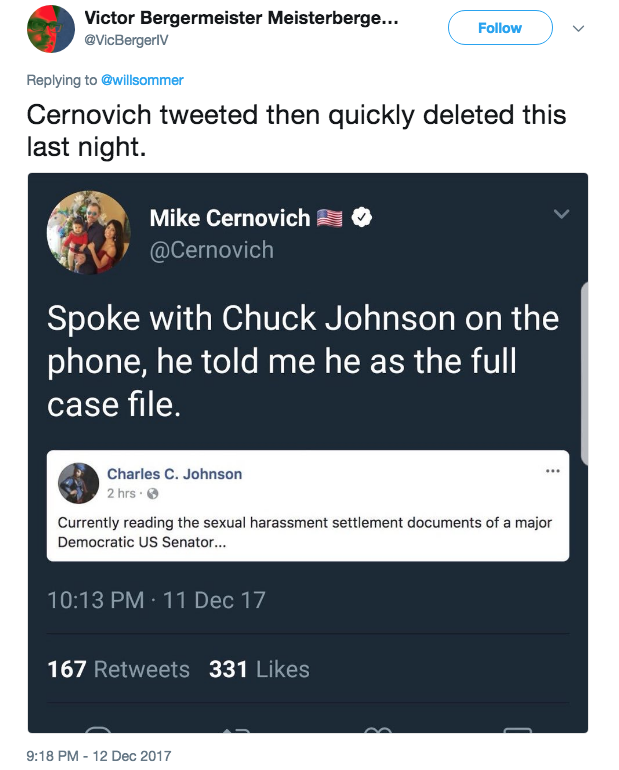 After posting and deleting the comment, Cernovich began walking back his claim, posting multiple videos on Twitter where he attempted to explain away his promotion of the document, arguing that he believed the story to be a “Big story or a Big hoax.” Cernovich later admitted that the document was apparently a hoax and claimed he has the “phone number of the hoaxer.”

According to Axios, the document Johnson purported to be reading was a forgery and an attempt to “dupe reporters and smear” the Democratic Senator. After catching wind of the attempted smear, Schumer reported the forged document to the Capitol Police who are investigating the incident:

Senate Minority Leader Chuck Schumer (D-N.Y.) said he was the victim of a fake news hit on Tuesday, and has turned over to Capitol Police a document that purports to detail lurid sexual harassment accusations by a former staffer.

Why it matters: This was an apparent effort to dupe reporters and smear a senator — both symptoms of an amped-up news environment where harassment charges are proliferating and reporters have become targets for fraud.

The former staffer told me in a phone interview that she did not author the document, that none of the charges ring true, and that her signature was forged.
She said she had never heard of the document before Axios took it to Schumer's office for comment on Tuesday.

Matt House, Schumer's communications director, told me: “The document is a forged document and every allegation is false. We have turned it over to the Capitol Police and asked them to investigate and pursue criminal charges because it is clear the law has been broken.”

House continued: “We believe the individual responsible for forging the document should be prosecuted to the fullest extent of the law to prevent other malicious actors from doing the same.”