On September 26, a third woman came forward with an account of sexual misconduct by Supreme Court nominee Brett Kavanaugh. Julie Swetnick said in a sworn declaration, initially posted on her lawyer Michael Avenatti’s Twitter account, that she witnessed Kavanaugh and his friend Mark Judge “drink excessively and engage in highly inappropriate conduct,” including “abusive and physically aggressive behavior toward girls.”

According to Swetnick, Judge, Kavanaugh, and others would make efforts to “‘spike’ the ‘punch’ at house parties … to cause girls to lose their inhibitions and their ability to say ‘No,’” and they would make “efforts” to “cause girls to become inebriated and disoriented so they could then be ‘gang raped’ in a side room or bedroom by a ‘train’ of numerous boys.” Swetnick also stated, “In approximately 1982, I became the victim of one of these ‘gang’ or ‘train’ rapes where Mark Judge and Brett Kavanaugh were present.”

Several right-wing media figures reacted to this story by attacking Swetnick, casting doubt on her story, and defending Kavanaugh:

The Resurgent’s Erick Erickson: “So the FBI conducts six investigations into Kavanaugh and totally misses that he's been running drug and rape gangs since age 15, but the solution is to have the FBI do a seventh investigation?” 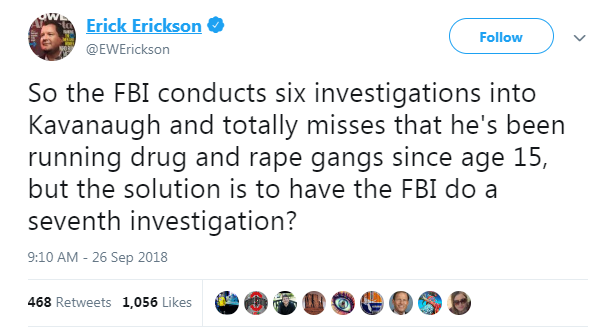 ”Erickson: “If you know there's a band of 15 year olds running drugs and raping fellow teenagers, why'd you keep going to the parties? Why'd you never tell anyone else about this rape gang?” 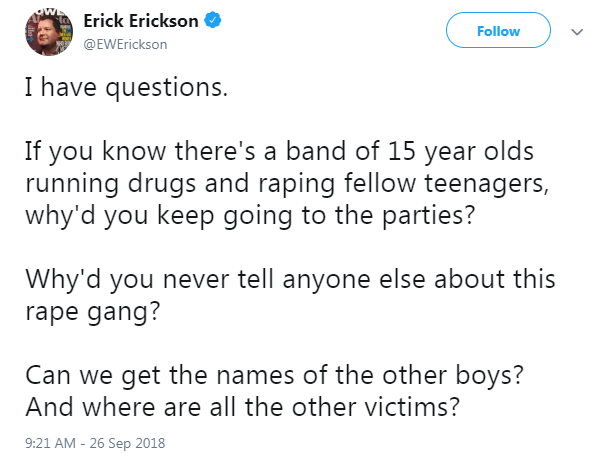 Erickson, again: “Was Bill Cosby ever at a Georgetown Prep party?  Because this sounds more like they confused Kavanaugh for him.”

The National Review’s David French: “Please someone help me with this. … Lots of people knew [Georgetown Prep boys] were committing gang rape, … [but] no one has talked publicly for three decades, until the day before a crucial Senate hearing. What?” 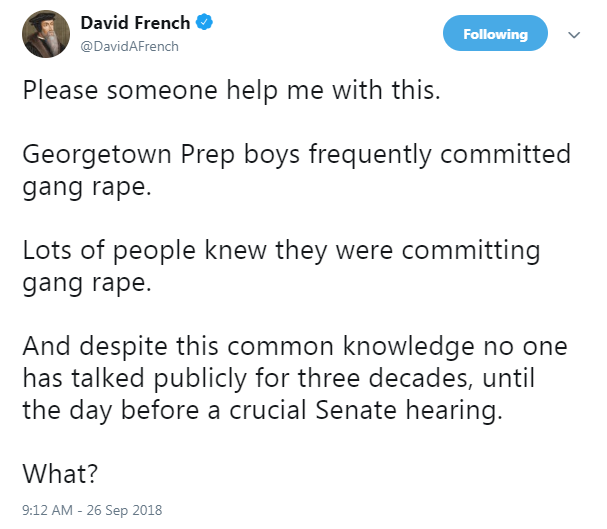 Radio host Hugh Hewitt quote-tweeted French’s tweet, writing: “It is not plausible. Committee staff should speak with her and senators/committee counsel should question Kavanaugh specifically on new affidavit. Then vote Friday. The parade of late hits won’t stop, won’t be illumined by delay.” 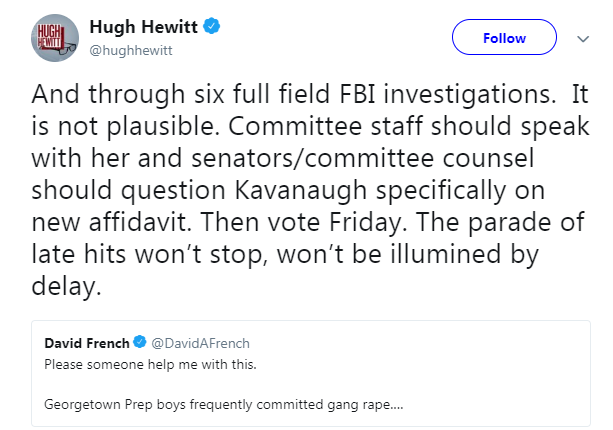 The National Review’s Rich Lowry: “One obvious question about this account: Why would she constantly attend parties where she believed girls were being gang-raped?” 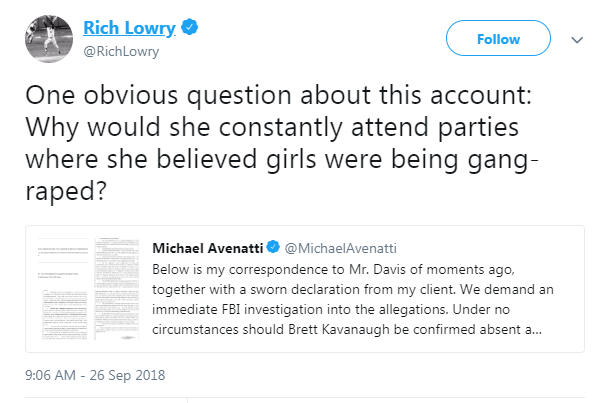 The Daily Caller’s Saagar Enjeti: “At no point in this allegation does Avenatti's client claim she was raped by Brett Kavanaugh.” 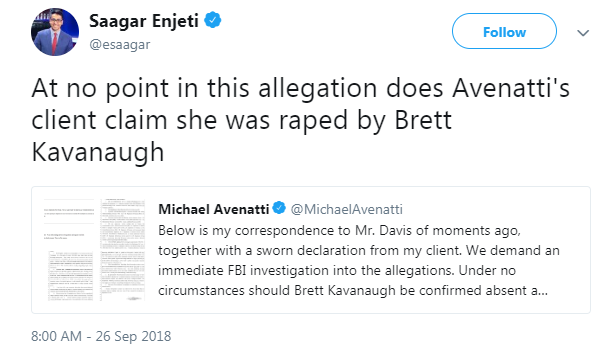 The Daily Caller’s Derek Hunter: “Curiously @CNN is ignoring the garbage allegations of multiple gang rape parties. Yet they’re taking the test as gospel. What a bunch of bullshit.”

The Daily Caller’s Amber Athey: “Why the fuck did this woman go to ‘multiple parties’ where she knew gang rapes were a common occurrence?”

Fox News’ Stephen Miller: “This is going to end up at someone saw Kavanaugh do the shocker one time.”

The Federalist’s Mollie Hemingway: “One thing that is not being captured in the media/Dem coordinated ‘Destroy Kavanaugh’ campaign is how unspeakably angry it is making a huge percentage of the population… They are *angry.* 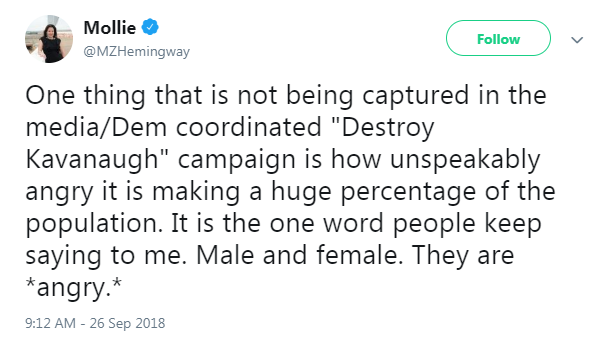 Townhall’s Kurt Schlichter re-tweeted Avenatti’s tweet of Swetnick’s name and photo, with the caption “full of it.”

Schlichter: “This is all bullshit. Confirm him.”

Conservative radio host Buck Sexton: “We are left with 2 choices. 1) Kavanaugh was part of a secret roving gang rape squad in DC that was systemically violating women. … 2) This is the most disgustingly dishonest, coordinated smear campaign in US history.”