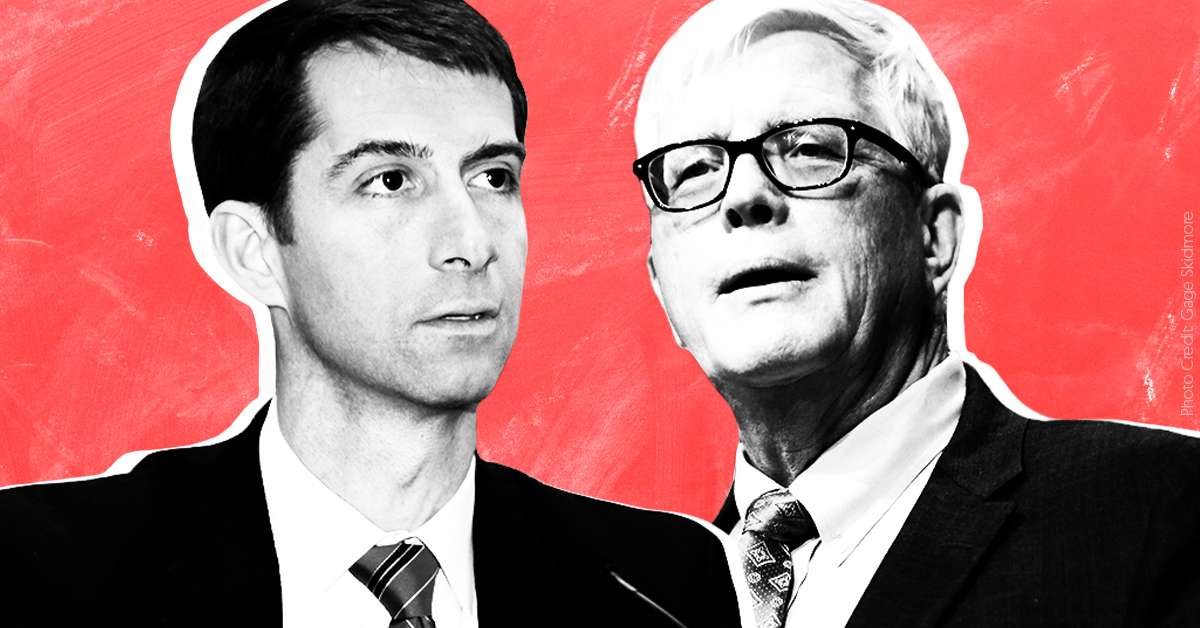 Conservative pundit Hugh Hewitt and Sen. Tom Cotton (R-AR) are pushing a conspiracy theory that professor Christine Blasey Ford’s decision to speak out about then-Supreme Court nominee Brett Kavanaugh was actually orchestrated by Democratic leaders in the Senate. The version of events proposed by Hewitt and Cotton is at odds with reports on how Ford decided to come forward, and it serves to undercut Ford’s bravery.

Cotton was a guest on the October 9 broadcast of Hewitt’s radio show, The Hugh Hewitt Show. Hewitt prompted the conspiracy theory by asking Cotton if he thought “that this was planned long before it was unveiled? And by that, I mean the leak of Dr. Ford’s letter. I don’t know who did it, but I believe it was part of a campaign that was set up to occur exactly when it did. Do you agree with me?”

Cotton did agree, and he wove an evidence-free conspiracy theory that as early as July, “the Schumer political operation” -- a reference to Senate Minority Leader Chuck Schumer (D-NY) -- and possibly former U.S. Attorney Preet Bharara were involved in a plan to leak the contents of a letter Ford had sent to Sen. Dianne Feinstein (D-CA). In the letter, Ford gave an account of Kavanaugh sexually assaulting her when they were both in high school.

Here he is on Hugh Hewitt's show, saying Chuck Schumer secretly orchestrated a planned political campaign around Dr. Ford's allegations starting in July. Egged on by Hewitt. This is not how this went down. pic.twitter.com/6J1yFg9YS1

This conspiratorial timeline is at odds with reality. Ford sent a letter dated July 30 to Feinstein and asked that the California senator keep its contents confidential. The Intercept was the first to report on the letter, writing on September 12 that it “describes an incident involving Kavanaugh and a woman while they were in high school” and that Feinstein was refusing to share its contents with other senators, which “created tension on the committee.” According to Politico, “The reporter behind that [Intercept] story later stated that Feinstein’s staff did not leak the letter.”

Ford came forward publicly in a September 16 Washington Post article. She said later during her testimony before the Senate Judiciary Committee that the presence of reporters at her home and workplace made her realize her identity would be revealed in any case, so she decided to speak on the record with a reporter at the Post who she said had gained her trust.

Hewitt has a history of being dishonest while discussing federal judicial nominations, but political talk shows still treat him as a mainstream conservative commentator when they bring him on to talk about the topic. While previously his falsehoods served to provide cover for the GOP to radically change norms around the nomination process, he has now sunk to pushing a conspiracy theory.

Cotton, for his part, has his own history of underhanded behavior on executive branch nominations. In 2014, Cotton placed a hold on President Barack Obama’s nomination of Cassandra Butts to serve as ambassador to the Bahamas. More than two years after her nomination was announced, Butts, who Cotton acknowledged was not a controversial nominee, died of leukemia at age 50, with Cotton’s hold still in place. Before she died, Butts told The New York Times that she had visited Cotton to ask about the hold and he said he knew she was friends with Obama and the hold was a way to inflict personal pain on the president.