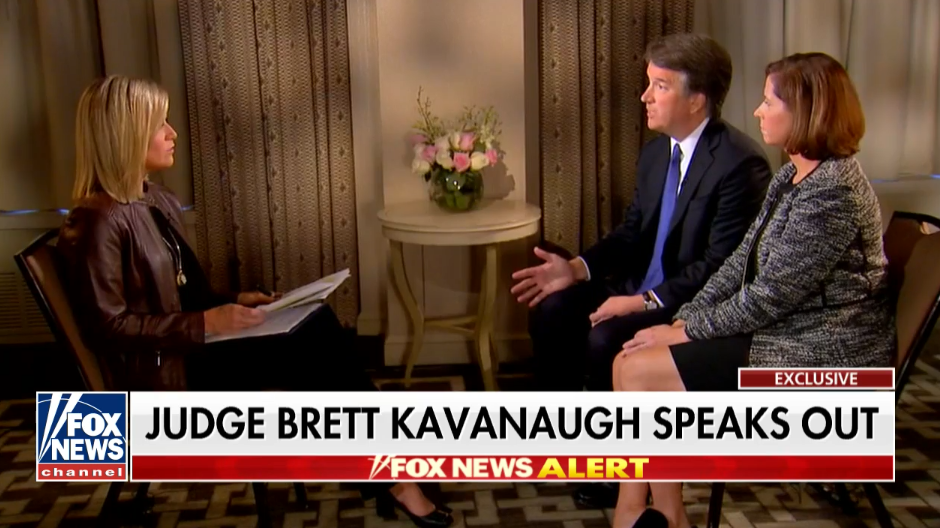 Supreme Court nominee Brett Kavanaugh and his wife, Ashley Kavanaugh, sat down with Fox News’ Martha MacCallum last night in an attempt to cast doubt on multiple reports that Kavanaugh sexually assaulted women at parties in high school and college. Fox News -- and MacCallum’s show, specifically -- were made for this moment. And they delivered.

In the interview -- which President Donald Trump promoted on Twitter shortly before it aired -- MacCallum did not point to any details that undermine Kavanaugh’s defenses nor did she mention support for the accounts of misconduct made public by Christine Blasey Ford or Deborah Ramirez. Yet the interview immediately garnered praise from some right-wing media figures.

While MacCallum’s interview may have cleared the incredibly low bar some people have for Fox News, she still offered a largely friendly platform for Kavanaugh to try to rehabilitate his image in advance of Thursday's Senate Judiciary Committee hearing on his reported misconduct.

“I'm not going to let false accusations drive us out of this process.” —Brett Kavanaugh

MARTHA MACCALLUM: Did you guys ever look at each other and say: “I’m out, this is enough. This just isn’t worth it”?

At one point, Kavanaugh attempted to discredit the multiple reports of misconduct by saying he hadn’t had penetrative sex until well into college. MacCallum did not note that both Ford and Ramirez allege nonpenetrative assault, let alone tackle the numerous other reasons why this statement that he was “a virgin” is irrelevant.

KAVANAUGH: We’re talking about an allegation of sexual assault. I’ve never sexually assaulted anyone. I did not have sexual intercourse or anything close to sexual intercourse in high school or for many years thereafter. And the girls from the schools I went to and I were friends —

MACCALLUM: So you’re saying that through all these years that are in question, you were a virgin?

MACCALLUM: Never had sexual intercourse with anyone in high school?

MACCALLUM: And through what years in college since we’re probing into your personally life here?

KAVANAUGH: Many years after. I’ll leave it at that.

Here are some other notable details the interview did not cover:

MacCallum also failed to get an answer on whether Kavanaugh actually wants an FBI investigation.

This all makes sense given MacCallum’s history.

Assuming former Fox News executive and current White House communications staffer Bill Shine was involved in the process of securing this interview, it’s no wonder he went for MacCallum -- a former colleague with a demonstrated loyalty to at least one serial harasser and his enablers and a reported willingness to attack other women on their behalf; a white woman far less controversial or well-known to the general public than Laura Ingraham or her predecessor Megyn Kelly; a modern icon of subtle internalized misogyny.

It would have been no secret to Kavanaugh, the Trump White House, or other GOP leaders exactly where Martha MacCallum stood before the interview. As recently as Sunday, she tweeted that she’d heard others characterize Kavanaugh’s treatment by Senate Democrats as “sickening.”

The rest of Fox News had already set the stage for every nonsensical, insulting defense in the book

Many Fox News personalities-- including several who have the ear of the president -- have recently been going all in on a pro-Kavanaugh public relations campaign, from dismissing the reports against him to attacking or otherwise attempting to discredit the women who came forward. Just in the day leading up to MacCallum’s interview:

And that’s just from Monday. Over the past couple of weeks, Fox personalities have promoted Ed Whelan's absurd doppelganger theory, latched onto other absurd smears of Ford and Ramirez, suggested the women were in cahoots with Democrats, and even flatly declared Ford’s account was “not a sexual assault.”

Before Ford or Ramirez shared their public accounts, and before Kavanaugh was nominated, MacCallum had made The Story a safe space for other high-profile men reported for sexual misconduct and devoted airtime to questioning the prevalence of sexual assault while boosting the myth that false accusations are widespread.

MacCallum was a Roger Ailes loyalist, and she reportedly attacked his accusers

This isn’t the first time MacCallum has lent her credibility as a Fox woman to a PR offensive for an alleged sexual abuser. Both behind the scenes and publicly, MacCallum was an early supporter of former Fox News chief Roger Ailes after former anchor Gretchen Carlson first went public with her lawsuit in 2016 alleging serial sexual harassment by Ailes and a permissive, toxic culture at Fox News. MacCallum was “one of the first to attack Gretchen Carlson & defend Roger Ailes when Gretchen sued for sexual harassment!” tweeted Carlson’s lawyer, Nancy Erika Smith. She was one of several female Fox News figures who joined Fox’s PR offensive after the Carlson lawsuit was filed, offering quotes to multiple outlets about how great working with Ailes had been.