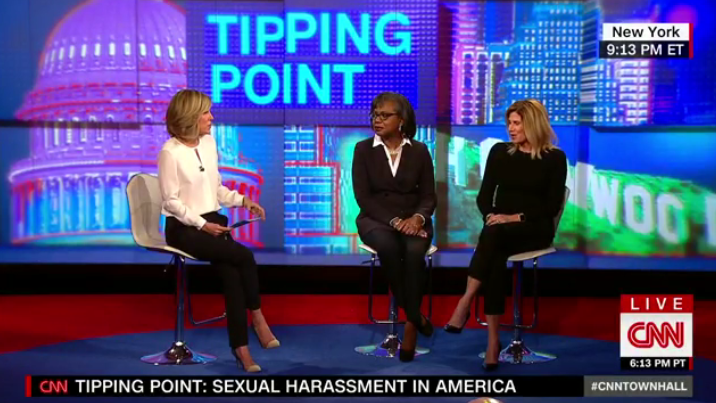 Hours after at least three new reports of sexual misconduct by high-profile men were published, CNN’s Alisyn Camerota hosted a powerful town hall conversation on sexual harassment in America. CNN’s decision to devote an hour of prime-time television news to lifting up survivor voices and engaging in thoughtful conversations with a live audience is commendable, and it’s the sort of thing viewers ought to see more often on cable news.

CNN’s town hall, titled Tipping Point: Sexual Harassment in America, was a model for the ways national news commentary can address a cultural moment by providing the public with facts and context, while also approaching a tough subject with responsibility and empathy.

Barth told The New Yorker last month about a 2011 incident in which Harvey Weinstein demanded she give him a naked massage during a business meeting. She is also currently pursuing charges against producer David Guillod for sexual assault. Barth shared with a national television audience her decision to come forward publicly:

ALISYN CAMEROTA: Why do you think that so many people are reluctant to now talk about this in this sort of public forum?

JESSICA BARTH: It’s scary. I think there’s a lot of fear that comes with it, as what we just read about Harvey Weinstein and his ties with the [private intelligence firm] Black Cube. There’s a lot of fear. There’s shame with speaking out, and I think part of the process in moving forward is to try to alleviate that shame. I think women who have a story and need to speak out can look at the media right now -- I don’t know how it’s going to be in the future -- but right now it seems to be that the media is a powerful tool in getting justice and for these perpetrators to get consequences.

Hill, who testified in 1991 that Supreme Court Justice Clarence Thomas had sexually harassed her, spoke about her hopes that the current #MeToo moment would lead to greater examination of systems that allow for serial sexual harassment and to a better public understanding of sexual harassment happening every day in all industries:

CAMEROTA: Professor, from where you sit, 26 years later, after your testimony, do you feel like we’re at a tipping point right now?

ANITA HILL: I absolutely do. You know, I’ve been in this for 26 years now, and I’ve seen stories come and go, and some of them are quite powerful. I’ve seen movements come and go, and some are quite powerful. I’ve not seen something like this. And I’m hoping that not only will it bring lasting change, but I’m really hoping in two areas, in particular, that change comes. One, that we start looking at how harassment and harassing behavior is enabled, and all the, really, structures and people who are complicit in making sure that harassment either continues or gets disguised. And that’s one of the things that we can clearly learn from the Harvey Weinstein story -- that every day there are revelations about who was helping him and who was covering it and who was being used to attack women who came forward to accuse.

The other thing that I hope is that the believability factor gets transferred, and that it gets transferred to people, again, outside of Hollywood, but also to women who have been marginalized on this issue for years. Part of the response to me had to do with my race. There are people who are not believed, not because their stories aren’t true or credible, but because there’s a certain kind of skepticism that comes with all kinds of identity factors, whether it’s sexuality or race or class. And so we tend to think about Hollywood, and I want us to understand that this is -- sexual harassment, sexual assault is something that happens to women of all races, all ages, all sizes, all backgrounds, religions. And until we can believe all women, every woman’s voice has value, none of us, really, will be seen as equal.

Hill’s words reflect the larger theme of the CNN town hall: Workplace sexual harassment is an all-too-common experience that transcends class, race, politics, and industries. For every woman like Gretchen Carlson or Anita Hill who was harassed by a powerful man and who spoke up and then lived through, in an incredibly public way, the world’s sometimes heartening and often heartbreaking reactions, there are countless other people whose painful stories will remain unheard.

Camerota’s later conversations with Sen. Kirsten Gillibrand (D-NY), activist Tarana Burke (who started the #MeToo movement), and others drove home this point. Questions from audience members -- often activists, some who had experienced sexual harassment themselves -- also underscored this message.

A town hall, rather than a multiperson panel of pundits, was a great public service to viewers, in particular those who may have experienced sexual harassment in the past. If one tuned in and didn’t see her experience reflected in Carlson, perhaps she would in Burke, or in an audience member.

Or perhaps she would see herself in the moments of this town hall that felt like conversations I have every day with my friends -- moments in which Camerota and Carlson acknowledged their camaraderie as women who experienced harassment and silencing at Fox News. Or in which Gillibrand described an incident of harassment she’d experienced and the audience reacted with recognition and empathy. Or in which Camerota closed out the show by sharing one of her own sexual harassment experiences and bringing on stage the woman who helped her when she reported it -- moments for which I am particularly grateful as a woman and a survivor, as well as a media researcher.

Tipping Point: Sexual Harassment in America may have itself illustrated a tipping point in media: a time when a major news network spends an hour of prime time listening to the voices of activists and survivors and mostly women.