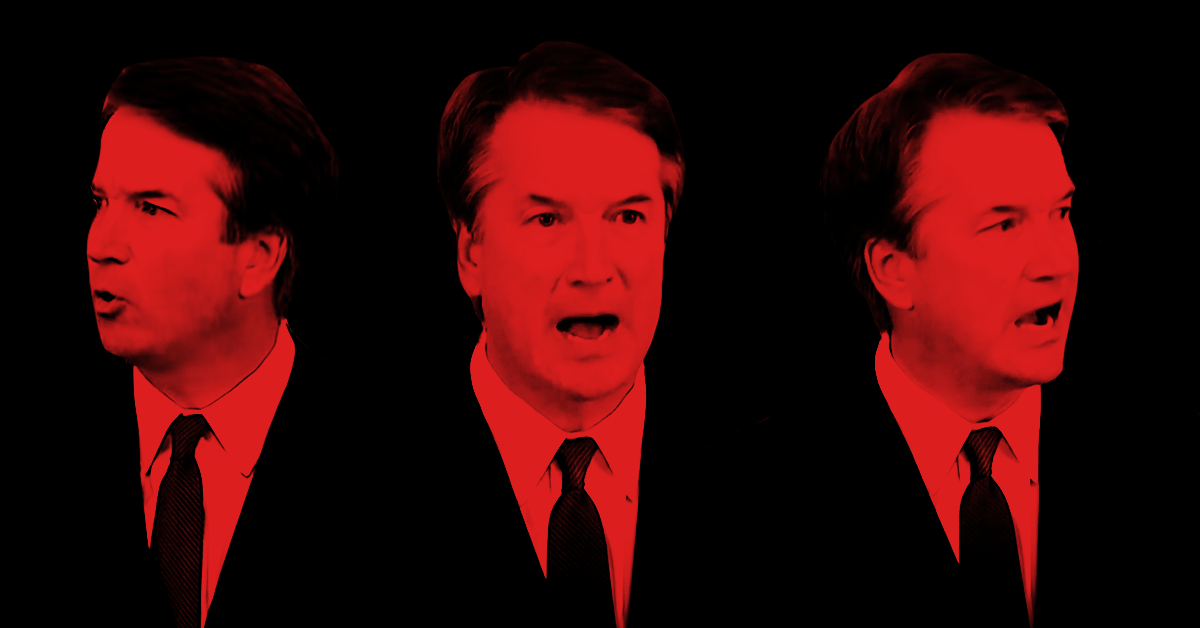 After Christine Blasey Ford came forward to say that Supreme Court nominee Brett Kavanaugh sexually assaulted her when they were in high school, many, many members of right-wing media adopted a singular purpose: Prove that Ford has character issues to destroy her credibility.

Those attempts have fallen flat as the two major lines of attack on Ford’s character were based on false information (not that it will stop some from continuing to push the claims). These smears are demonstrative of the vile and apparently uncontrollable urge that some conservatives have to attack survivors of sexual assault. And for what it's worth, Ford's account has been corroborated by her husband, a friend, and therapist notes from 2012. And false reporting of sexual assault is very rare.

The conservative media-led investigation into Ford’s background also raises the question of why exactly the burden of showing good character is on her and not Kavanaugh, who is interviewing for a job where he must prove his good character and fitness:

If Ford does testify, it's important to remember that this is not a criminal proceeding. Her role is not to offer evidence that Kavanaugh is guilty beyond a reasonable doubt. This is about whether he has the character to deserve the privilege of a lifetime judicial appointment.

The Senate Judiciary Committee has now set a hearing on September 24 in which it will call Kavanaugh and Ford to testify. Kavanaugh has denied assaulting Ford and will likely repeat the denial under oath on Monday. But as the hearing approaches, it is important to remember that Kavanaugh has a credibility problem and that there is absolutely no reason to take his testimony at face value.

During his three previous appearances before the Senate Judiciary Committee -- in 2004, 2006, and 2018 -- there’s strong evidence Kavanaugh lied under oath in some cases and had not been forthright during questioning in many other cases.

Kavanaugh seemed to have repeatedly lied under oath about his time at the Bush White House, including about his receipt of documents stolen from Democratic congressional offices by a GOP operative, his knowledge of a warrantless wiretap program, his involvement in detainee policies for so-called enemy combatants, and his role in advancing the nominations of controversial conservatives for federal judgeships.

Here’s an exchange between Kavanaugh and Sen. Patrick Leahy (D-VT) from the most recent hearings over the stolen document issue:

As background, Kavanaugh had previously denied during multiple hearings that he knew or had any reason to suspect that documents forwarded to him by GOP staffer Manny Miranda, which included internal strategy documents used by Democrats working on judicial nominations, were stolen from Democratic computers. Leahy confronted Kavanaugh with some of the emails he had received from GOP staffers involved, including one that had the subject “spying.” Kavanaugh’s answer strains credulity:

PATRICK LEAHY: On June 5, 2003, you received an email from a Republican Senate staffer with a subject line “spying.” That is not overly subtle. This staffer appears in over 1,000 documents we received together with both of you and Mr. Miranda. She says she has a mole for us and so forth. None of this raised a red flag with you?

LEAHY: Judge, I was born at night, but not last night. And if I had something that somebody said “we've stolen this,” or “don't tell anybody we have this,” I think it would raise some red flag.

In Kavanaugh’s telling, he thought the information he received about Democratic judicial nominee strategy that was clearly for internal use is merely the result of bipartisan work between committee staffers. Is that a believable or even minimally forthright answer?

Kavanaugh’s lack of candor during his hearings extended well beyond the dodges that some nominees use to hide their ideological views and avoid commenting on hot button issues that may appear before the Supreme Court. When Sen. Kamala Harris (D-CA) asked Kavanaugh whether he had discussed special counsel Robert Mueller or his investigation into Russian interference in the 2016 election with anyone who works at the law firm Kasowitz Benson Torres LLP, he struggled to answer:

Kavanaugh’s non-response raised eyebrows and fueled speculation that he was hiding something, especially because Kasowitz Benson Torres is a well-known practice and one of Kavanaugh’s close friends is a partner there. Kavanaugh acknowledged as much the following day when Sen. Richard Blumenthal (D-CT) questioned him about it again.

Kavanaugh’s lack of candor has extended to written responses he has provided as part of his confirmation hearings. Much attention has been paid to up to $200,000 in credit card debt that Kavanaugh had quickly reduced to an amount below reporting thresholds between 2016 and 2017. (Kavanaugh has said the debt was the result of buying multiple season ticket packages for the Washington Nationals for himself and his friends.) Following Kavanaugh’s questioning at the committee hearing, Sen. Sheldon Whitehouse (D-RI) sent Kavanaugh detailed questions about his finances, including asking about the season tickets and whether Kavanaugh has a gambling problem. Here is Kavanaugh’s “somewhat cryptic” answer:

Kavanaugh on his Nationals tickets: pic.twitter.com/V1vDngJLJ6

Does that answer provide a clear explanation of what exactly went on with the debt? Of course not.

Consider also that Kavanaugh once enlisted his friends to keep details of a trip they took together from their spouses. In a 2001 email, Kavanaugh apologized to his friends after the trip for “growing aggressive after blowing still another game of dice” and added, “Reminders to everyone to be very, very vigilant w/r/t confidentiality on all issues and all fronts, including with spouses”:

What was that about?

It’s also worth noting that there is another person whose credibility may be important to consider, but that conservative media have shown no interesting in examining.

According to Ford, while Kavanaugh put a hand over her mouth and was attempting to remove her clothes, one of Kavanaugh’s classmates, Mark Judge, was in the room. Judge, like Kavanaugh, has denied the incident occured. But in his memoir, he has written that he often drank to the point of blacking out during high school. Judge is now a conservative commentator and the disturbing views he has expressed about sexual assault, and women generally, make his claims about the incident even more suspect.